Ever since I heard about Caral, I wondered why it isn’t more popular with travellers. The oldest ruins in the Americas, constructed at the same time as the first pyramids of Egypt. Who would not want to visit them? I was sure that going there would be easy and that I could spontaneously arrange a day trip from Lima, hopping on a bus with lots of other tourists.

Turned out I was wrong. Despite the significance of Caral, it was surprisingly hard to get there. I looked up tours but most of the companies only offered private trips and I wasn’t willing to pay a fortune. Surely, there had to be a better way?

There is! Caral can easily be visited independently as a day trip from Lima for a fraction of the price you would pay for a private tour. Here is all the information I gathered so that you can go there, too.

As I already mentioned, Caral is the oldest settlement in the Americas. It belongs to the Norte Chico civilisation that lived along Peru’s coastline more than four thousand years ago.

If you have ever been to Peru’s West, you will have seen the many sand dunes along the coast. It doesn’t come as a surprise that the city of Caral, which was buried underneath them, was lost until an archaeologist named Paul Kosok discovered it in 1948. Even then, scientists didn’t pay much attention to the site until much later.

What I found especially fascinating about Caral is the fact that nobody ever found any signs of warfare there. No weapons, no signs of prisoners, nothing. Just musical instruments and a quipu, a piece of strings with knots that was later used by the Incas to keep records.

Why should you visit?

Besides Caral being the oldest city in the Americas? And the Chico Norte civilisation having developed technologies like the quipu that were still used by Incas almost four thousand years later?

Besides all those facts, Caral is also fun to visit because it is almost empty. When we went, we ended up meeting three other tourists, one single traveller from the Czech Republic and an elderly Peruvian couple who lived not far away. It made exploring the ruins and taking pictures so much more fun!

Now that I have (hopefully) convinced you to visit Caral, you need to know how to get there.

The ancient settlement of Caral is located 200km north of Lima, along the Panamerican Highway. To get here, you need to first make your way to the town of Supe. You can do so by taking a bus to Barranca. It takes about three hours.

There are a couple of bus agencies going to Barranca. If you have been to Lima before, you will know that annoyingly, there is no central bus terminal. There are some bigger terminals, but most companies just leave from their own office. So you have to figure out the name of the company you want to go with and then take a taxi to their office.

In theory, you could also reach the bus company by public transport. But since most of them are located in rough areas, I highly suggest you go for a taxi. Don’t risk your life or losing all of your possessions just over a few soles.

We decided to go with Tourismo Barranca. Their busses weren’t very nice but they took us to Supe and that was all we needed. On our way back, we went with Transportes Sol Barranca. Tourismo Paramonga apparently also goes there. As I said, don’t expect much comfort. But at least, the bus is cheap.

If you have the chance, ask at your hotel if they can call the bus company so you can find out about their schedule. The amazing staff at our hostel (we stayed at 151 Backpacker Hostel, which I can highly recommend) was very helpful in organising all of this for us.

If you want to visit Caral in one day, I suggest taking an early bus. You should leave at six or seven the latest because it’s going to take at least three hours to get to Supe, even more, if you get stuck in the morning rush hour.

From Supe, you need to take a colectivo to get to Caral. The bus company will drop you off on the main street in Supe and from there, you can ask around for transport to Caral. Even if you don’t speak Spanish, as long as you say ‘colectivo Caral’, people will point you in the right direction.

I highly recommend hiring a taxi or colectivo driver to wait for you in Caral and take you back to Supe after you’re done. Otherwise, you might end up stuck out there in the desert and it’s a long way back to civilisation.

An alternative is to take the colectivo to Caral town and hike the remaining three kilometres from there. Just remember to take enough water and lots of sunscreen because it’s hot out there in the desert.

A different alternative, especially when travelling with several people, is getting a rental car. You could make your way to Caral Town with it and take a taxi to the ruins from there.

The roads that lead you to the archaeological site are a nightmare. That’s why I wouldn’t want to go there with a rental car but would instead take a taxi.

I went by bus since that was the cheapest and easiest way for my friend and me. But as I said, you can always get your own car.

Visiting the site of Caral

When you arrive at Caral, you will get to a giant visitor complex. Judging by the facilities, it looks as if they expect a couple hundred visitors each day. They have signboards with information about Caral, a huge picnic area, space for shops and restaurants and so on. But most shops were abandoned or had never been set up and we didn’t find any open restaurants while we were there.

All that was open was the ticket shop where we bought our tickets and were then told that we had to go on a tour to visit the site. Unfortunately, tours were only available in Spanish or Italian that day.

I speak a bit of Spanish and the guide tried to speak as slowly and clearly as possible. But if you don’t speak Spanish, you can read the English signboards that you can find in various places in Caral. I used them in addition to the Spanish explanations to make sure that I understand what’s going on. Also, I heard that on weekends, Caral is more lively so you might even be able to get an English guide.

Since you don’t know whether or not you’ll be able to buy water in Caral (once again, your chances are higher on weekends), I suggest you stock up on it in Supe. Also, make sure to bring lots of sunscreen. Caral is located in an open desert with sand dunes and a lot of reflection. That’s why sunglasses are a must as well.

Getting back to Lima

Getting back to Lima is very straightforward. Take a taxi/colectivo back to Supe. From there, on the main street, you will find a bus office. Go inside and say that you want to get back to Lima. All that is left now is waiting for the bus and then hoping that the traffic doesn’t get too bad.

Maybe get some of the amazing fresh watermelon while you wait. Just look around the main street to find the street vendors.

It took us way longer to go back because we were stuck in a traffic jam. We left Supe at around 3 pm and I think by the time we arrived in Miraflores, it was about 10 pm. Hopefully, you’re luckier than me and don’t have to spend as many hours sitting on a bus.

I hope you found this guide useful. As I said, one of the most frustrating things about planning a trip to Caral was the lack of information online, so I tried to compile everything I know online. If I’m missing anything, please let me know.

Did you enjoy Caral? Or are you still planning on going there? Make sure not to miss this site next time you travel to Peru! It would be a shame. Also, if you are staying in Lima, check out our guide about top things to do in Peru’s capital. 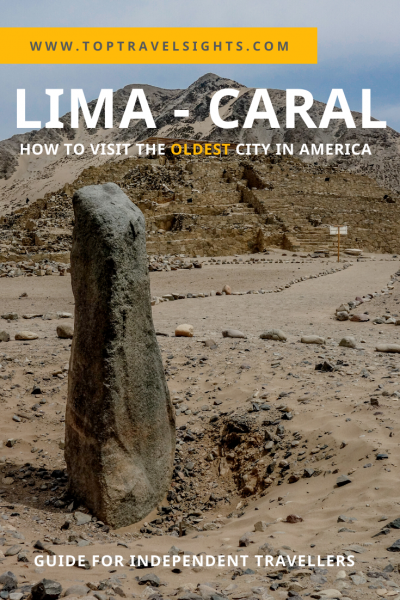