Bern is one of the most beautiful cities I’ve had the pleasure to visit. I still remember being amazed at the landscape while peeking from the window of my train. The city itself is also gorgeous, with beautiful buildings, cobbled streets and lovely gardens.

In retrospect, I have no idea why it took me so long to visit Bern. I had been thinking about coming here for many years but it was never feasible. The closest airport was too far away, I didn’t have time or I just decided to go elsewhere. But from Frankfurt, my new home, it was so easy to get to Bern by bus that there was no reason to go anymore.

I absolutely loved Bern! If you haven’t been, I highly recommend that you go. It is expensive (like everywhere in Switzerland) but it is totally worth it.

#1 Walk around the Old Town of Bern 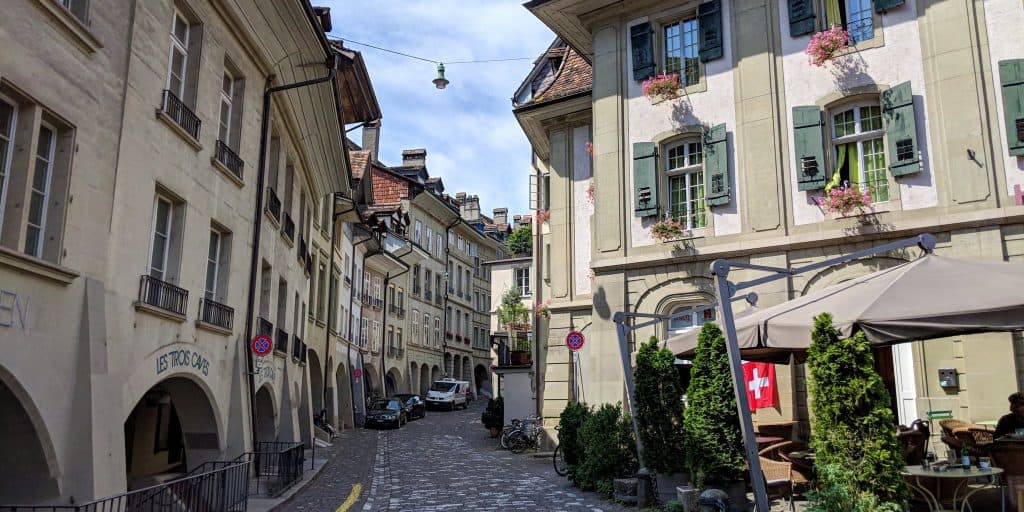 There is no doubt that Bern´s Old Town is one of the highlights of the city. It is so pretty that we spent most of our day just wandering up and down the beautiful streets. Did you know that there are over 100 fountains in Bern? You can find some of the most impressive ones while walking along Kramgasse, but you should also explore the backstreets to discover more hidden places.

If you come on a Tuesday or Saturday, check out the markets on Bundesplatz and Münsterplatz where you can get lots of local produce. The Swiss produce awesome cheese so if you want to buy some, this is your chance.

Talking about shopping. If you like shopping (and have the money as Switzerland is not cheap), you will love Bern. The city is known for its six kilometres of arcades which allow you to go window shopping even on rainy days.

Another thing that you won’t see elsewhere are the cellar shops. In the middle ages, the cellars underneath each house were used for storage. These days, the locals have turned them into cafes and shops and I loved climbing down and discovering them.

#2 Try to understand the Zytglogge 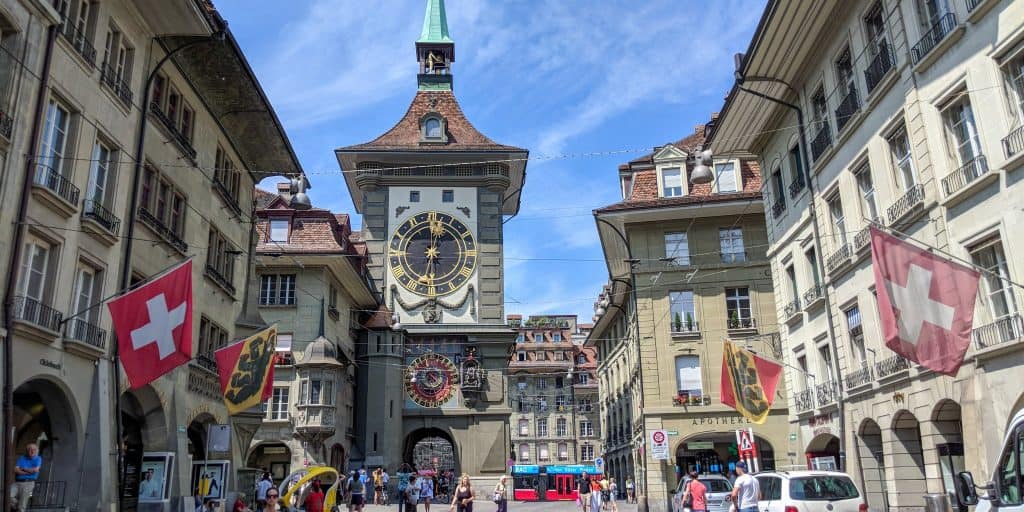 You might need a guide to explain the Zytglogge to you because I still don’t understand how to read it. The big clock at the top is easy, but the one below it? I have no idea what it means. What I do know is that it’s a very pretty tower and that you should walk there and take a look.

These days, this astronomical clock is located right in the city centre. But when it was constructed in the 13th century, it served as a gate in the city’s western wall. It’s crazy to think about how much Bern has grown since then!

The Zytglogge, a UNESCO World Heritage Site, and dates all the way back to the 15th century.  It is so old that the clock follows the Julian calendar, which doesn’t have leap days, so it has to be manually adjusted every 29th of February!

If you want to, you can join a guided tour to see the inside of the tower. I didn’t have the chance to do it myself, but it’s a great way of discovering the complicated clockworks behind the clock. And who knows? Maybe, by the end of the tour, you will even understand how to read not just the time on the Zytglogge. 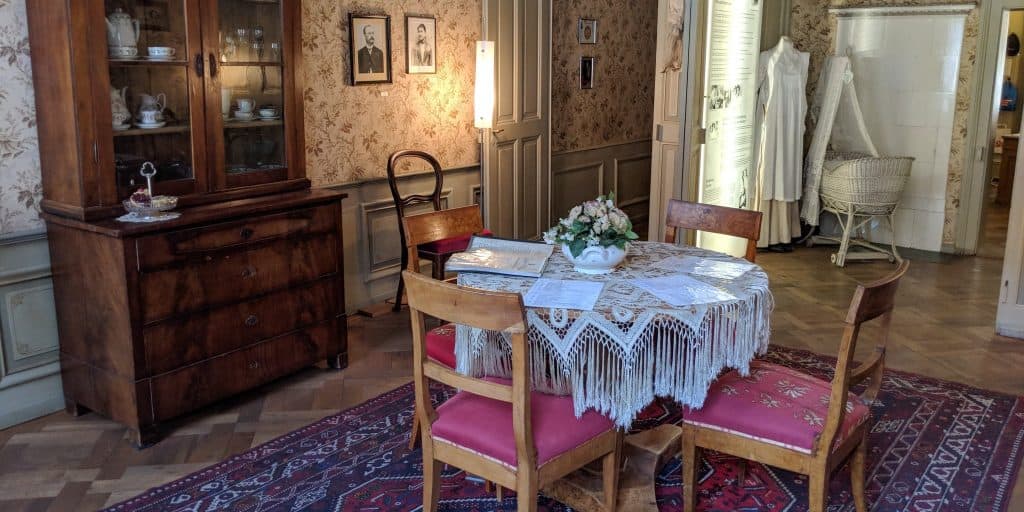 It would be a shame to come to Bern and not visit the house where Albert Einstein used to live. Born in Ulm, a city in southern Germany, he moved to Bern in 1903. He actually only lived there for two years, but it was in this apartment at Kramgasse No. 49 that he worked on his papers regarding the theory of relativity.

The apartment is decorated in the style of the early 20th century so you can see how Einstein lived together with his wife and his son. In between the old furniture, you find exhibits about Einstein’s life and his scientific work. On the upper floor, you can then read up more in detail about his biography, or even watch a video about his life. All exhibits are, of course, available in English.

#4 Watch bears at the Bärenpark 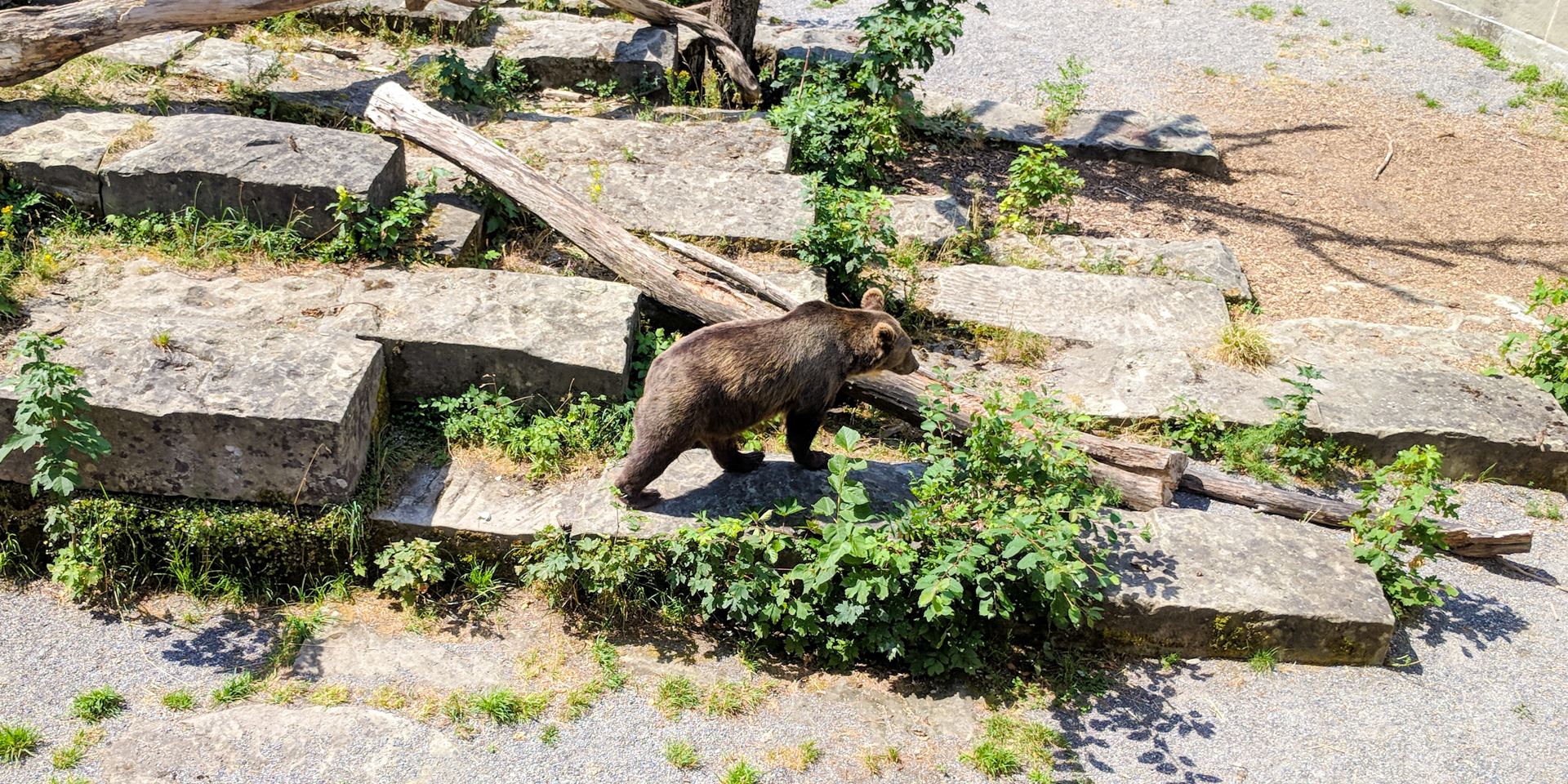 Bärenpark translates to bear park so it shouldn’t come as a surprise that you can find bears here. What did come as a surprise to me is that the first time someone mentioned bears in the bear park was in 1441. That means that they have been around for more than 500 years! Some legends say that the city of Bern was named after a bear, though there are also different theories on where the name came from.

No matter what, you should make sure to stop by the Bärenpark and watch the bears here. Plus, if you walk down towards the river a little bit, you have a nice view of the Aare and the city. I enjoyed sitting there for a while and watching the water flow by. 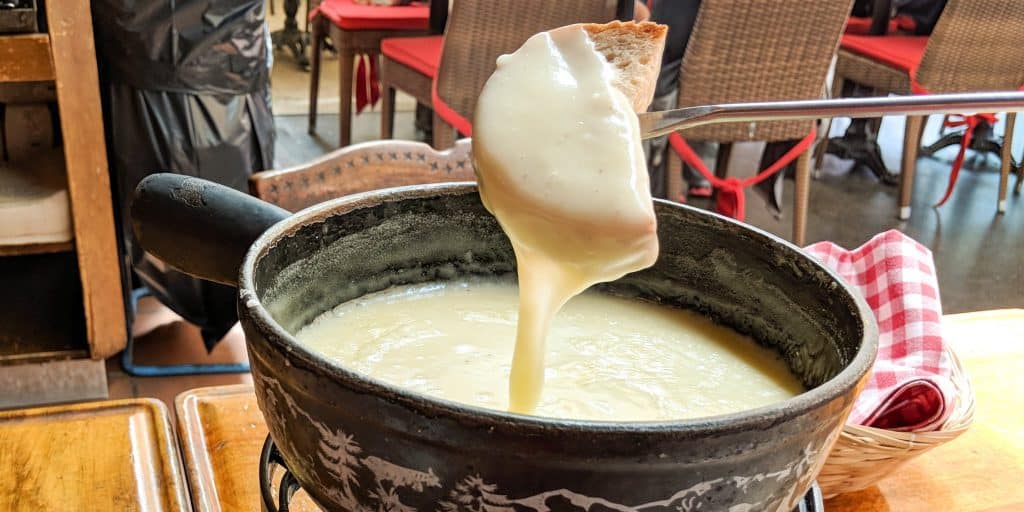 While in Bern, you should not miss out on the many amazing Swiss dishes that you can try in this country. A typical dish from Bern is the “Berner Platte”, which is a plate full of various kinds of meats and sausages. I never tried it as there were too many other amazing dishes that I wanted to eat. Cheese fondue, for example. What could be better than dipping chunks of bread into molten cheese?

Another dish that you should try is rösti. I was familiar with the idea from home. My mum would sometimes make small cakes out of grated potatoes and fry them in a pan. We would then eat them either with apple sauce or carrot salad. The Swiss rösti is like a super version of that dish.

While in principle, it is still a flat cake made out of grated potatoes, I have seen them with all kind of other ingredients added. Bacon works very well. Same with fresh herbs or cheese. Even vegetables go very well with a rösti. I urge you to go and try some of those röstis because they taste absolutely amazing!

Of course, there are many more Swiss dishes that you should try one day. Raclette, for example. There’s so much to discover in Switzerland and I hope you enjoy the food here.

How quickly can you chew?

#7 Play a game of chess against the locals 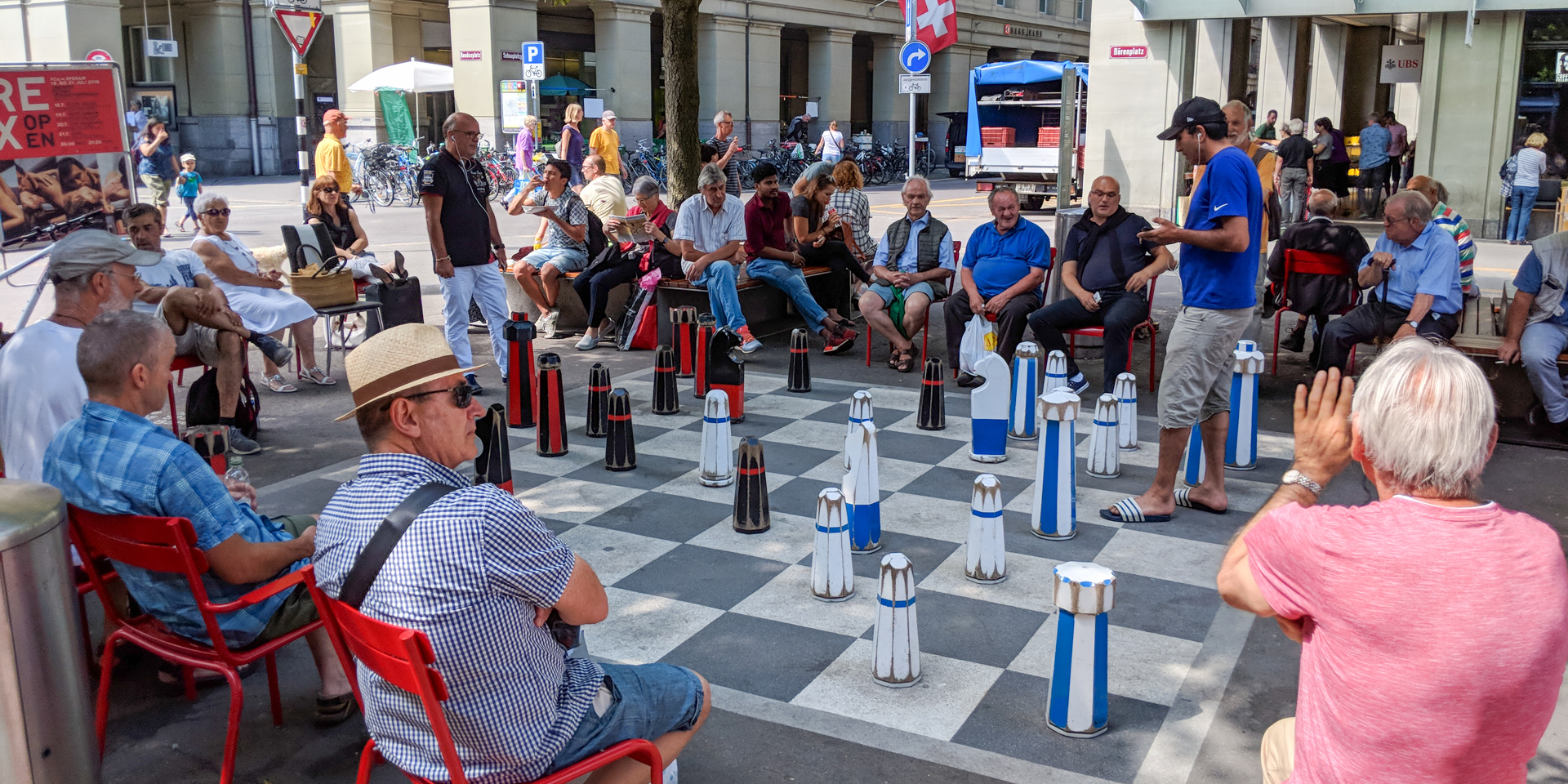 If you walk past Bärenplatz, keep your eyes open to find the giant game of chess. When we were there, we saw lots of locals hanging around, playing against each other. If you’re somewhat decent at chess, you could even challenge one of them. I didn’t since I barely even know the rules, let alone any strategies (I am much better at Chinese chess and have enjoyed losing against random strangers all over China, but that’s a story for another day).

Once you are done, take some time to explore the rest of the square. It is surrounded by beautiful buildings, especially the Parliament or Bundeshaus.

#8 Enjoy the view from Nydeggbrücke 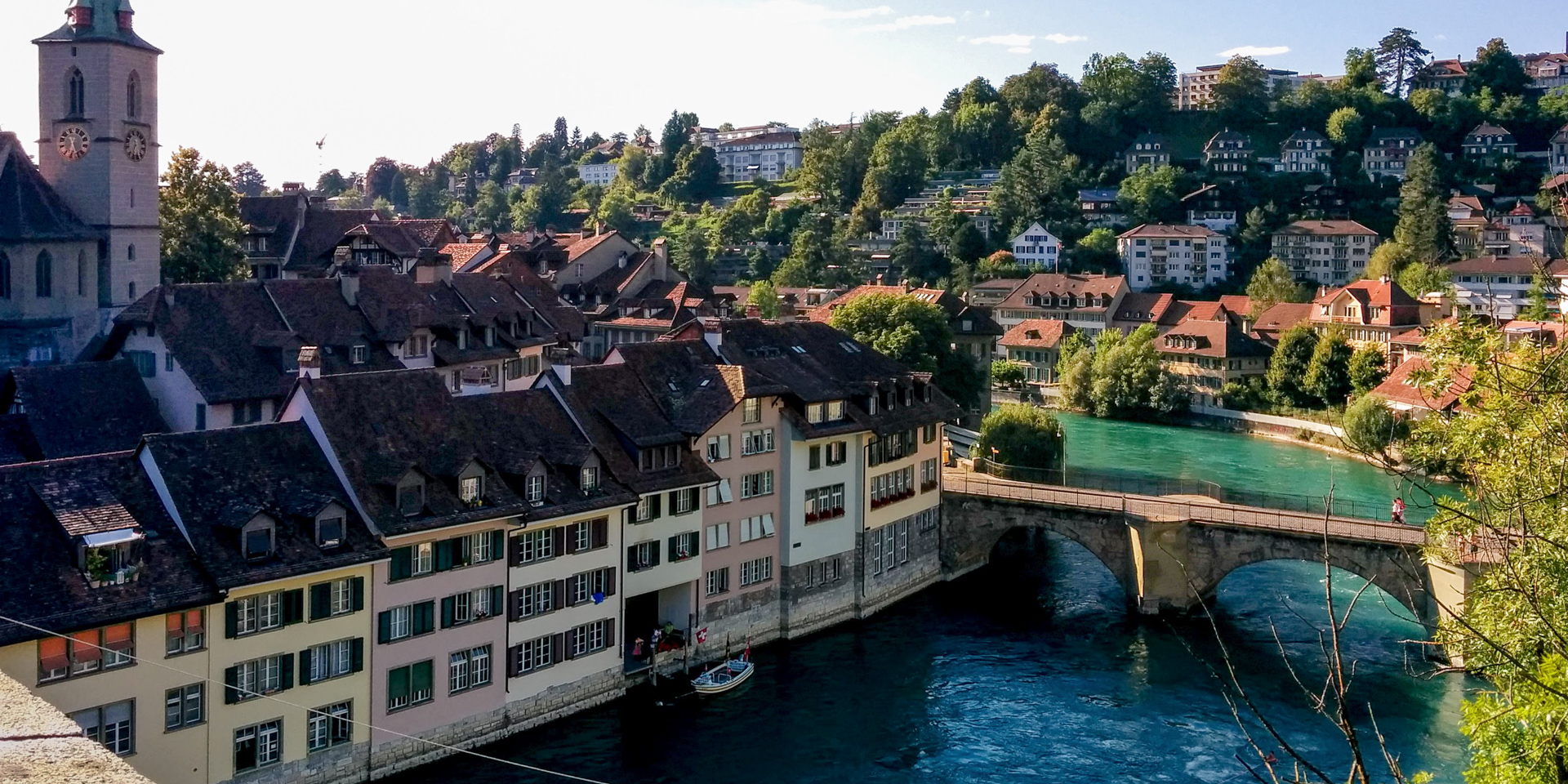 Keep walking down the street where the Einsteinhaus is and you will find a bridge over the Aare river. That is the Nydegg bridge or Nydeggbrücke. From there you get an amazing view of the city, both the old town and the new buildings.

I spent a long time there, just enjoying the fantastic view and taking a bunch of pictures. The colour of the water is almost unreal, with aquamarine tones that give the whole view a look straight out from a fairy tale.

#9 Float down the Aare River 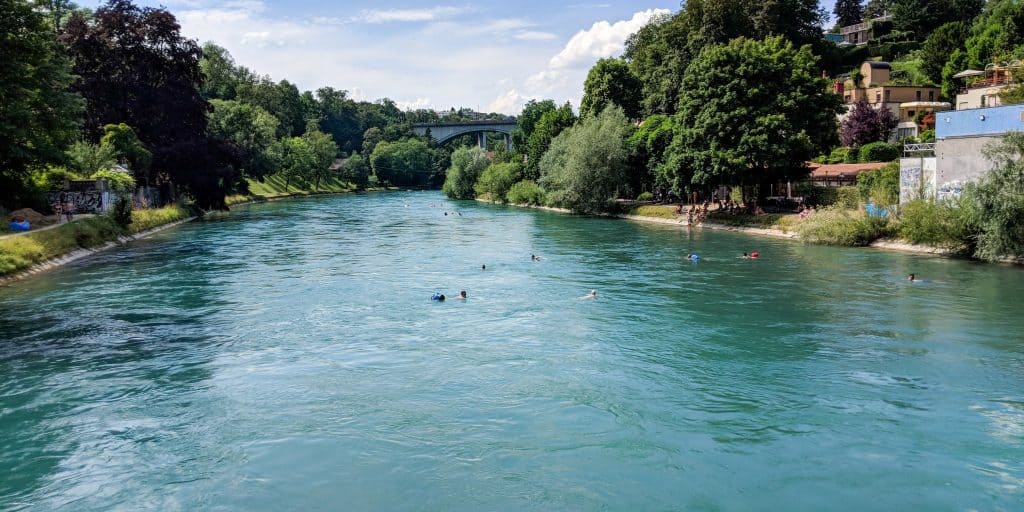 If you visit Bern in summer, bring your swimsuit! One of my biggest regrets is that I forgot mine at home. In summer, you can go swimming in the Aare River. As you can see, the river has a strong current. Locals get in somewhere upstream and then float down the river. It’s a great way of seeing Bern from a very different perspective and it looks like so much fun!

Next time I travel to Bern, I will make sure to take my swimsuit and a towel. And a waterproof bag, for my belongings. And then I will be the one floating down the Aare instead of just watching other people.

#10 Have dinner at the Rosengarten 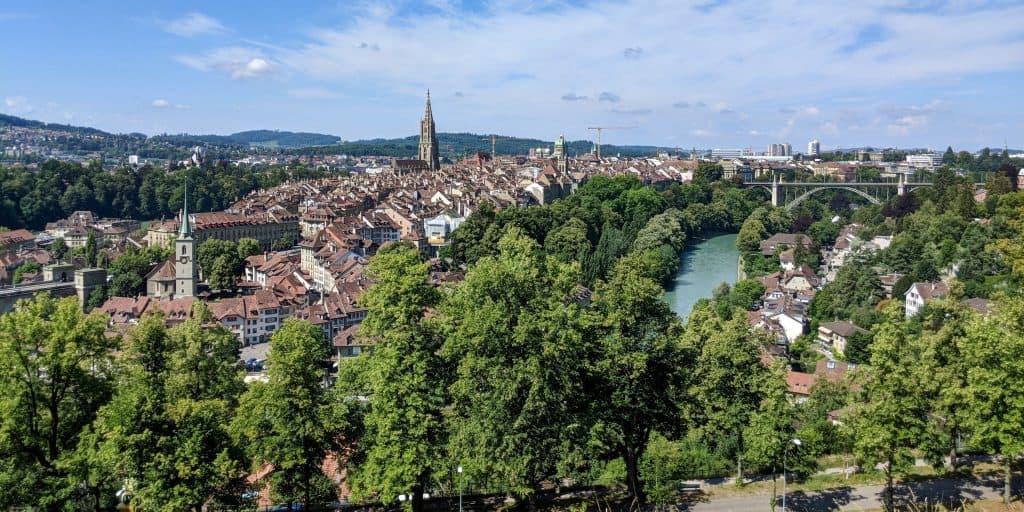 Since it was Daniel’s and my anniversary, we decided to go out for a nice dinner at the Rosengarten. The Rosengarten is located on the Eastern end of the city, on top of a hill. From there, you have an amazing view of the city. It’s the perfect place to take a picture of Bern or a selfie with the Einstein statue in a nearby bench!

Even if you decide not to eat anything, it is worth coming here for the view. On the way up, you can take a picture with a statue of Einstein sitting on a bench. From the top, you can then take beautiful pictures of the city of Bern.

The garden itself is nice as well, especially if you come in summer when all the roses are blossoming. And I enjoyed our dinner here, even if it was very expensive. But then again, sometimes, you have to spoil yourself, right?

1h if you just want to enjoy the view, 1 evening if you stay for dinner

Getting there and away

Bern is not the most accessible city in Europe, but there are plenty of ways to get there. The easiest one if you are close enough is the train. It is connected with Zurich, Basel and Lucerne. It has a small international airport only 30 minutes away from the city, but it doesn’t offer too many connections. Another good way of reaching the city is by bus.

You can find more information on all possible ways to reach Bern here.

The old town of Bern is small enough you can just walk everywhere. If you need to go further away, the public transportation system is excellent. And visitors can actually use it for free! Just ask in your accommodation and they will provide you with a transport card. Find more information here.

When to go there

The city is beautiful no matter the season. We went to Bern in summer twice, and the weather was perfect. Mild temperature, beautiful green lush views and ideal for swimming. Winter can also be a very good option. Sometimes it even snows! Not much, but if you visit between November and February you might actually get one or two days of snow.

There you have it, my favourite things to do in Bern. Have you been there? What did you enjoy doing? What are your favourite parts of the city and which food did you like most? I’d love to hear from you! 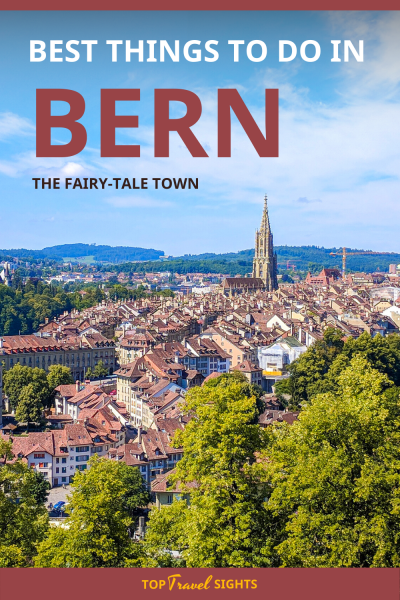