When I thought of Costa Rica, delicious food wasn’t the first highlight that came to my mind. I was expecting wildlife, cloud forests and waterfalls, but I never thought about Costa Rican dishes. Maybe because their cuisine isn’t well-known worldwide, or perhaps because I was too excited about the chance of seeing sloths.

But it turns out that food in Costa Rica is quite tasty. We tried a variety of dishes while travelling through the country, served at food stalls, in small cafes or excellent restaurants. And we are not the only ones who enjoyed eating out in Costa Rica. Below, you can find eight foods you should try, recommended by fellow travel bloggers. 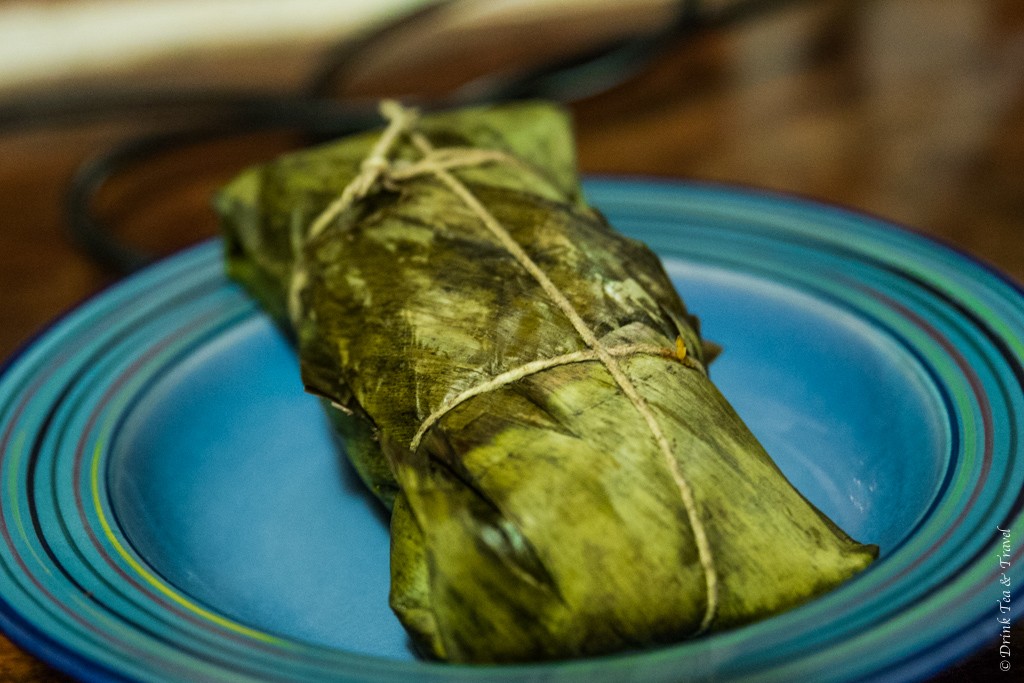 You can find Tamales in countries all around Latin America, but in Costa Rica, they do Tamales a little differently. They are much more than a road side snack. For Costa Ricans, Tamales are a holiday dish eaten during the Christmas season.

Tamales originated from the Aztecs in Mexico where they wrap the dish in corn husks. However, in Costa Rica, they are wrapped in banana leaves. Over the years, Spanish elements have been added to Tamales like rice or pork, which is characteristic of Costa Rica’s unique blending of cultures.

A lot of work is required to make this savoury dish. So during the holidays, families tend to come together to make the filling from scratch and prepare the banana leaves.

Masa is a starchy corn-based dough, and for Tamales, cheese, vegetables or meats are typically mixed in. The masa is wrapped in a perfectly cut and pressed banana leaf then steamed or boiled.

You can find this dish all over the countries and done right it is one of our favourite Costan dishes! If you are visiting outside of the holiday season you can still find Tamales on the menu in speciality eateries or tourist restaurants – you just have to keep your eye out for them! 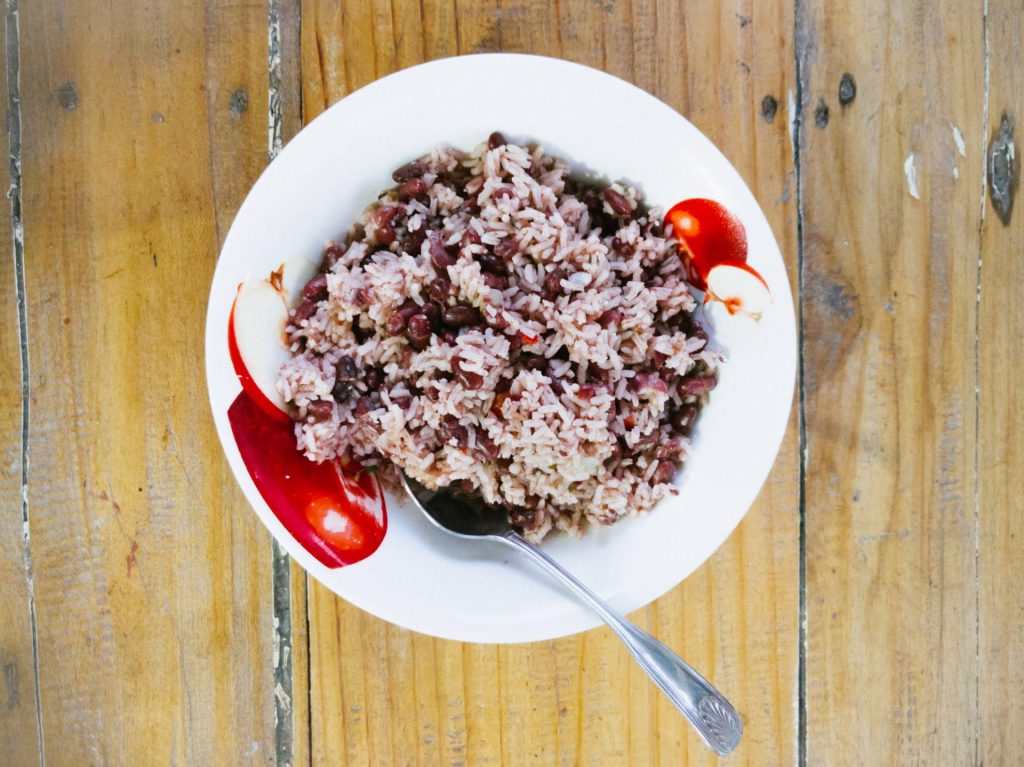 Although the national dish of Costa Rica is gallo pinto, a rice and beans dish, once you travel down south towards the coastal area in towns like Puerto Viejo, it’s not the most common rice dish.

In fact, it is more common to see rice and beans a dish that has no Spanish name. Locals who speak no English, call it rice and beans and it’s because it evolved from the traditional Jamaican food, rice and peas.

The cuisine in southern Costa Rica is a mix of both Spanish and Caribbean influences. Jamaica has such a strong influence because many Jamaicans immigrated to Costa Rica to help build the railroad. In fact, many of the Costa Rican fruit we see are originally from Jamaica, and they flourished in the country.

This is a simple dish made with white rice and red beans cooked in coconut milk and Panamanian pepper – a fruity but spicy pepper related to the scotch bonnet. Also known as aji chombo, it is not easy to find this spicy pepper in whole raw form in North America. However, substituting scotch bonnet or the milder jalapeno is perfectly acceptable.

There are variations of this dish on the coastal areas of Central America, in particular in Honduras and Belize where coconut milk is a common ingredient.

Contributed by Ayngelina from Bacon is Magic 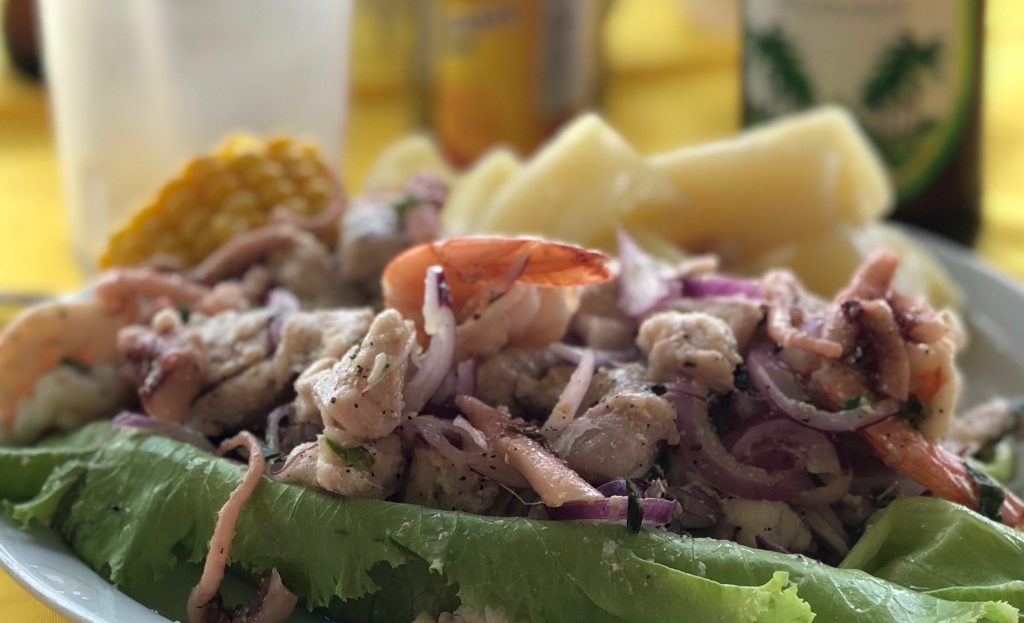 Ceviche is one of my favourite foods… and having lived in Peru for over 10 years, I have tasted a fair few different versions of this delicious raw fish dish.  However, I have to say eating ceviche in Costa Rica in the sweltering heat takes my appreciation of ceviche to a whole new level!

While Peru’s ceviche is raw fish, “cooked” in fresh lime or lemon juice, with coriander and raw onion …  Costa Rica’s ceviche adds in peppers (or chillies), and is frequently served in a cocktail class with soda crackers and lettuce. I’ve also seen the Ticos (that is a nickname for the Costa Ricans!) smother their ceviche in Tabasco or Tomato Sauce (ketchup). The Peruvians would be horrified.

The origins of ceviche, while attributed to Peru, are a little murky. Some think that possibly the practice came from Moorish Spain and was brought with the Spanish conquest. Others think that it came from one of the Pre Incan cultures of Peru.

Whatever you do, don’t miss ceviche when you are in Costa Rica!

Contributed by Ariana from World of Travels with Kids 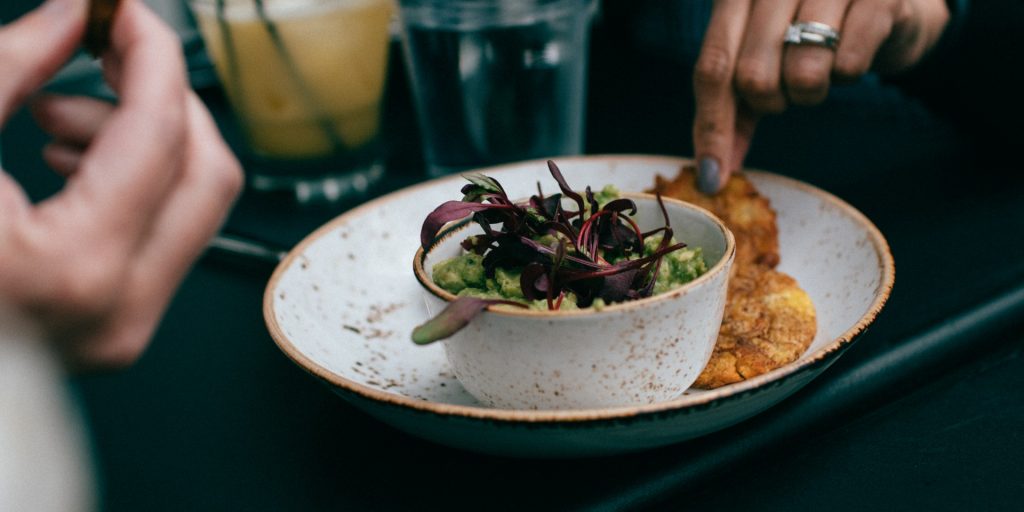 If there’s one simple snack in Costa Rica you shouldn’t miss, it has to be patacones or fried plantains. Also known as twice-fried plantains, it’s pure delight when you bite into this tasty, warm, crunchy/chewy, slightly sweet snack. But even with its sweetness, patacones can be considered a healthy snack perfect for when you want to stay in good shape while traveling.

You can eat patacones as a treat after a long day or as an appetizer. But for me, I love pairing them with a variety of dish including braised beef, refried beans, mango salsa, and even guacamole. If you want a more enjoyable experience eating this while in Costa Rica, I suggest you head to Restauranticos as they have the best patacones in the area.

Meanwhile, if you’d like to stay in and cook your own food during your travels, you’d be glad to know that patacones is a no-brainer recipe. Simply pick the best quality plantains you can find in the local market and slice them into big round pieces.

Fry them until they turn yellow and then take them out of the pan. While still warm, smash them and then fry them again until golden brown. Add that to your recipe bank and whip up some to enjoy with friends.

Contributed by Lucile from Lucile HR

Even if you can’t travel to Costa Rica right now, you can make patacones at home. Find out how in this virtual cooking class! 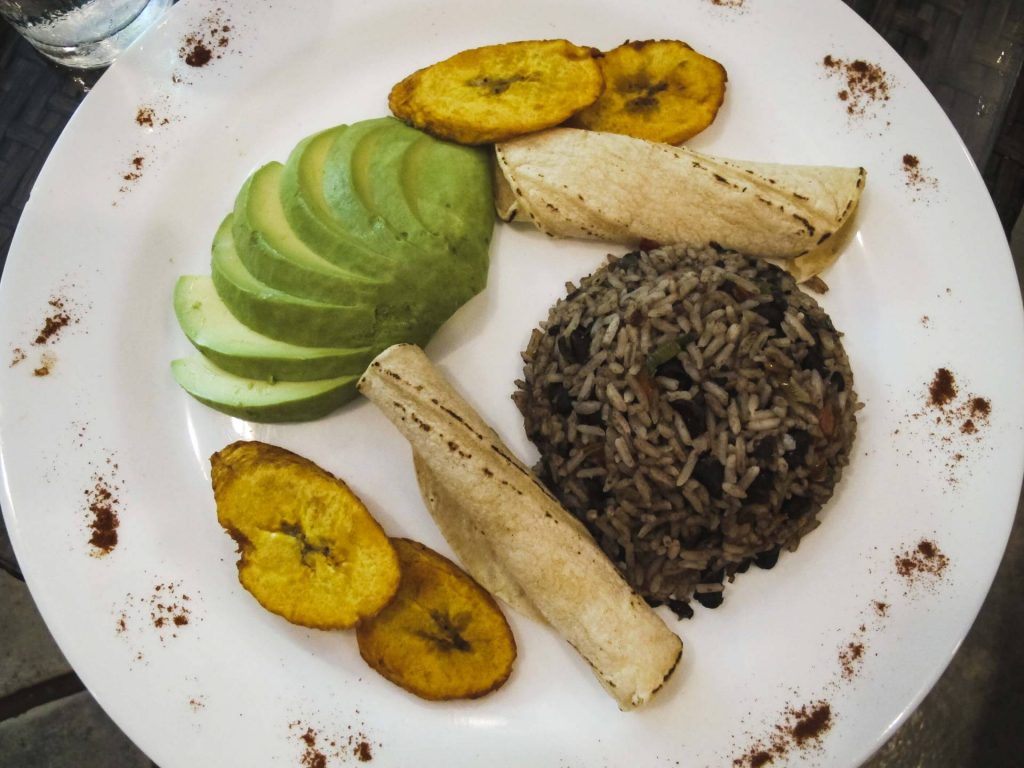 The casado is a traditional Costa Rican dish that literally translates to ‘married man’ in Spanish.  It is the most popular dish in Costa Rica currently and you can find it virtually anywhere when you’re traveling there.

It is possible to try a Casado dish in restaurants, at street vendors, and in homes.

The ingredients used to create a casado are tortillas, black beans, plantains, rice, and salad.  Sometimes, you’ll find typical meats such as beef, fish, chicken, and pork on the plate.  And sometimes you’ll find fruit like avocado, like this one in Montezuma on the Pacific Coast.

There are many stories detailing why it is called ‘married man’ and one theory states that it is the food of a married man as they consume it often.

Another story indicates that all of the ingredients in a casado dish complement one another as though they are ‘married’.  But nevertheless, no one really knows the true origins of its meaning.

For years, the casado has been a dish that provides energy for the day and it has become such a staple in the Costa Rican diet.  If you’re traveling to Costa Rica, you definitely have to add the casado to your ‘must-try’ list!

Contributed by Aram from Megan & Aram 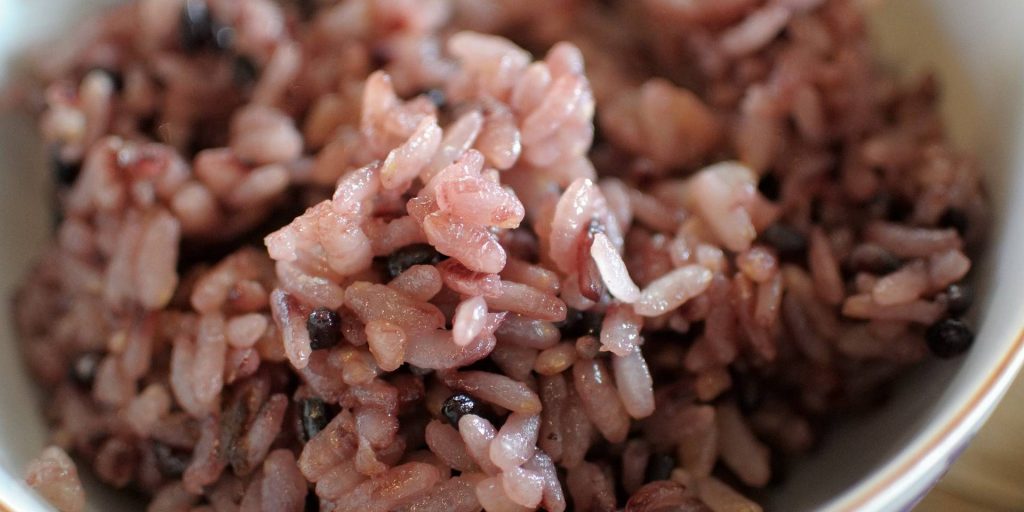 As Ayngelina already mentioned above, Gallo Pinto is Costa Rica’s national dish. You can find it pretty much everywhere you go, even though, in some areas, you will see more rice and beans.

Those two dishes are very similar, and Gallo Pinto consists of, well, rice and beans. Usually, people cook the beans first until their moisture has almost evaporated, and then add the already cooked rice. Afterwards, they season it with chillies, cilantro or onions.

Unlike rice and beans, Gallo Pinto does not include any coconut milk and therefore tastes different. You can find it all over the country, but the beans used in the dish vary. In some areas, you’ll see it with red beans, while in others, you’ll get black ones.

Gallo Pinto, by the way, means “spotted rooster”. That name refers to the speckled appearance of the dish, with rice and beans mixed together. 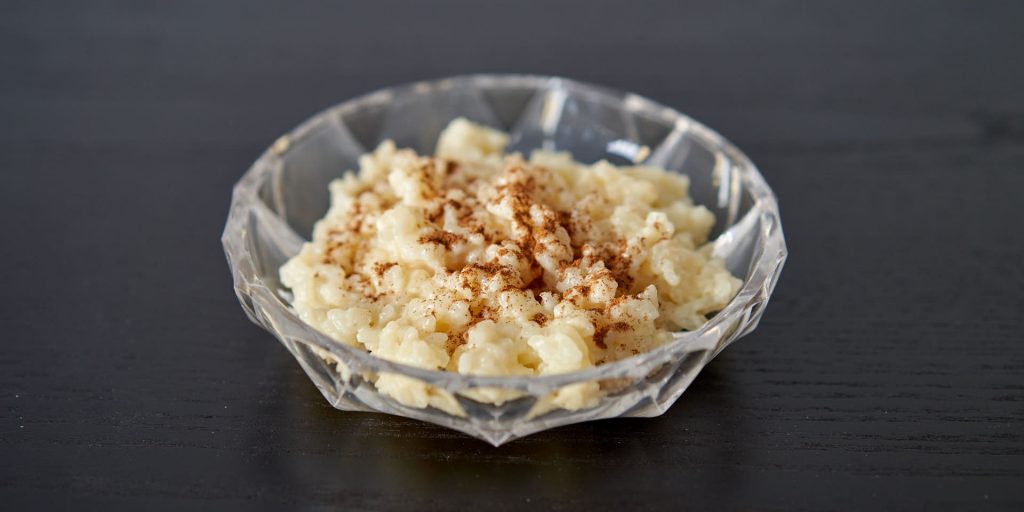 One of our favourite desserts to eat all over Latin America is arroz con leche. So it shouldn’t come as a surprise to you that this is also a dessert we recommend you to try in Costa Rica.

Arroz con leche is a very simple dish. You cook rice with milk. In Costa Rica, people will use condensed milk, evaporated milk and either regular milk or water. Cinnamon and cloves give additional flavour.

I love arroz con leche because of how sweet and sticky it is. Don’t eat this if you’re expecting a light dessert. I’d usually have a tiny cup, and even that would have been enough to replace dinner.

In Costa Rica, you will mostly find arroz con leche with cinnamon on top. Some places also add vanilla extract to the mixture, which gives it additional flavour. If you see a variation with fruit, go for it. The sweet and creamy rice blends well together with whatever fruit you use as a topping.

Or refresco or natural. In Costa Rica, fruit shakes have many names. The most universal one, that you can also use in many other countries in Central and South America, is batido.

Batido is a shake made with fruit and either ice or milk. Usually, the ones with milk cost extra, but I also find them more delicious. Nothing better than a good mango or maracuya (passion fruit) batido! Depending on the size of the serving, this is an excellent snack to get while out exploring. One of those, served with milk, would keep me full for hours.

As we already said above, you will get many opportunities to try food in Costa Rica. One of the best places, though, is at a soda. Those local restaurants will almost always have some traditional food for you to try.

Which food did you like in Costa Rica? Or do you have a favourite that we missed? 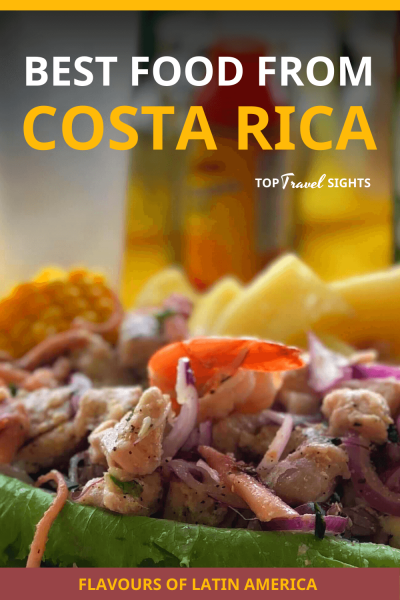