Imagine the following scenario: It is the year 2200. The world has been destroyed by us humans. Nothing is left besides the desert you are driving through. Suddenly, rising out of the ashes, white marble buildings appear at the horizon.

You have arrived in Ashgabat.

We are not living in the year 2200. The desert surrounding Ashgabat is natural and does not result from some humankind disaster. Nevertheless, while visiting the capital of Turkmenistan, I constantly felt as if I had arrived in the middle of a dystopian novel. I walked along eight-lane boulevards on which I didn’t see cars. I strolled through empty parks where I spotted only one lonely employee who cut the bushes with small scissors. From my bus window, I watched people clean the sidewalks with tiny brushes.

Ashgabat is so bizarre that you have to see it yourself. I know that Turkmenistan only gives out a few thousand tourist visas a year but if you have the chance, go and grab one of them. I promise you a unique experience that you cannot find anywhere else in the world. Plus, besides being a strange sight in itself, the city has a few attractions that you should visit and that will keep you occupied during your stay. 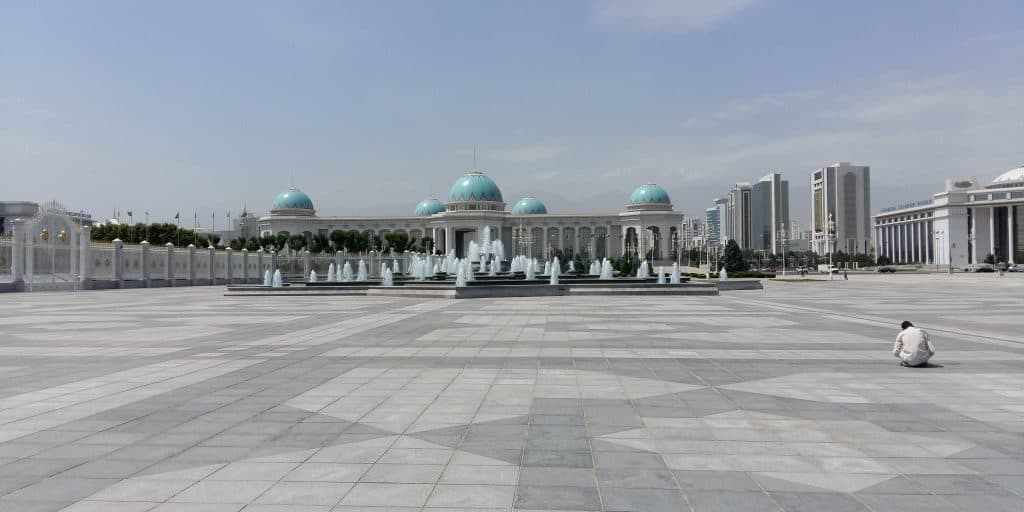 Independence Square is the centre of Ashgabat. Many government buildings are located here, as well as parks, fountains and a giant horse statue.

Walking around the deserted plazas, you will see soldiers at every street corner. You will come across gardeners trimming the lawn with tiny scissors, sprinklers distributing more water than you thought was available in this desert city and people cleaning the fountains with toothbrushes. Welcome to Ashgabat!

Talking about the white marble buildings. Be careful not to take pictures of government buildings or you will get arrested. If you’re lucky, like I was, you will get away with a policeman repeating “picture – big problem” while a soldier wipes your SD-card. But it’s best not to take a chance, especially around Independence Square.

#2 Learn about Turkmenistan at the Ashgabat National Museum of History

The National Museum of History is both informative and absurd. On the upper floor, you will find an exhibition about Turkmenistan’s history. I knew nothing about the country, so this was a great stop to gain some general knowledge of both ancient and medieval history. Let’s be honest, even if you’ve heard of the Silk Road in Turkmenistan, how much do you know about what came before? What about afterwards and what about today?

I didn’t count, but according to my research, you can see about 500,000 exhibits here. This includes cultural relics and carpets, which Turkmenistan is famous for.

On the lower floor, you will find an exhibition about the president of Turkmenistan. Don’t skip it. I am sure it was not intended this way but I found it hilarious. The exhibition includes lots of treasures like a painting of the president with white doves flying up in the background and the image of him sitting on his horse woven into a carpet. Just remember the Press Freedom and make sure not to laugh out too loud. 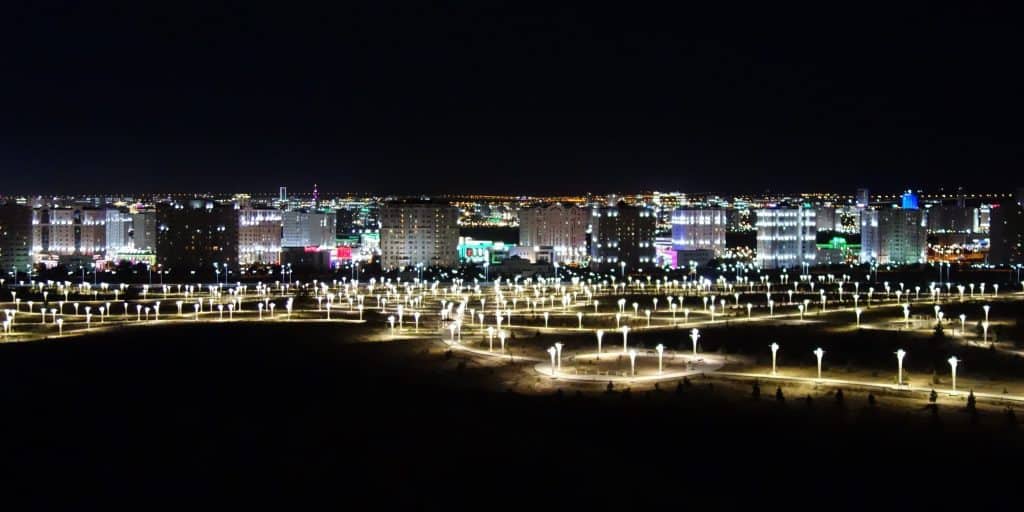 The best way to see the light show is to go on a bus tour. Ashgabat is sometimes compared to Las Vegas by night and while I remain sceptical about this comparison, the lights are spectacular – and absurd. Do you see the paths in the foreground? Who would light them up when nobody ever walks there?

The best way to see the extent of what has been lit up is to go up to the Wedding Palace, which, by the way, is illuminated in four different colours. If you don’t have the chance to go on a bus tour, just take a taxi up here. Or even walk around the city and admire the lights while thinking about the giant electricity bill that the president has to pay. 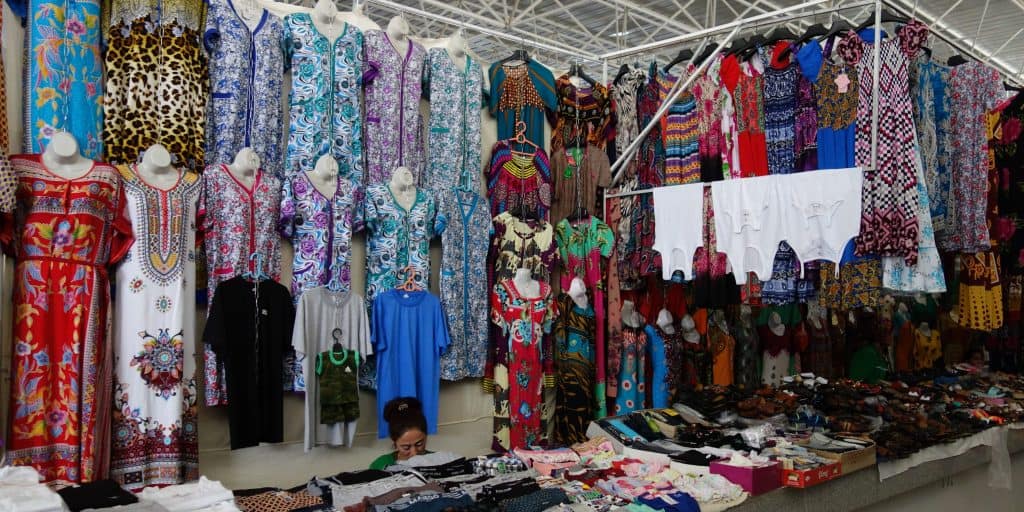 Ashgabat’s biggest bazaar, Tolkuchka Bazaar (which is also known as Altyn Asyr), has been moved to a location outside the city in 2010. You can easily get here either by taxi or marshrutka. The bazaar is spread out underneath several giant hangars. You cannot see it while at the market, but those hangars resemble a carpet pattern from a bird’s eye view. Like everything in Ashgabat, the bazaar was very empty and we saw far more vendors than clients.

Make sure to go all the way to the back to look at the carpets and furniture on sale. If you get hungry, fresh and dried fruit and nuts are available somewhere near the centre. And I bet you will get hungry while exploring the Tolkuchka market, as you can find more than 2000 shops here! It shouldn’t come as a surprise to you that this is the biggest market in Turkmenistan and one of the biggest ones in Central Asia.

Shashlik, also known as kebap, is one of the staple foods among the Silk Road. After a day of walking the empty streets of Ashgabat, sit down in a restaurant and enjoy a plate of chicken or beef shashliks. The national shashlik is made from young mountain goat but unsurprisingly, I didn’t see that anywhere.

What’s great about shashlik is that everyone will understand your order. The first restaurant where we ended up only had menus in Turkmen and we didn’t understand anything. But shashlik, that’s a word that we knew and that we could order easily.

Shashlik is traditionally eaten with bread so make sure to get some of that as well. And maybe a small salad on the side, if you manage to order one. 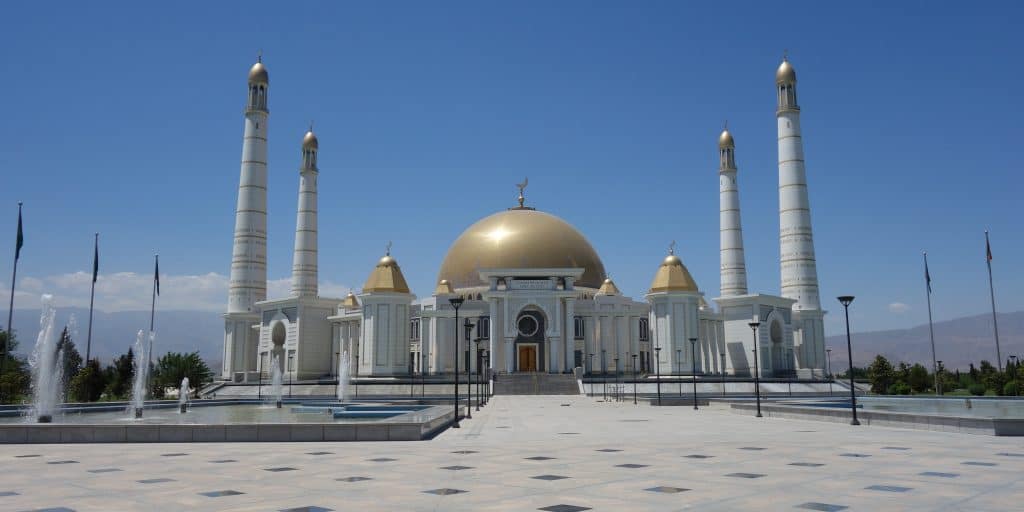 You know how everything in Ashgabat is built of white marble and adorned with gold? Ashgabat’s mosque is no exception. Located outside the city, it gives you a good idea of how Turkmenistan feels about religion. Don’t come here expecting to see people pray. While never being forbidden, religion was suppressed in all former Soviet countries. The mosque is still worth visiting for its stunning exterior and interior.

Next to it, you can find Turkmenbashi’s mausoleum, so make sure to check that out as well.

Walking past marble buildings on empty boulevards made me wonder if anyone actually lived in Ashgabat. It wasn’t until I took a public bus that I got to meet some locals. While nobody will openly stare at you, people are curious and insanely friendly and helpful once they find out that you’re a tourist.

It helps to speak a couple of words in Russian, as most locals will not speak English.

#8 The Walk of Health

Located in the mountains south of Ashgabat, the Walk of Health winds along the mountain ridges over a total length of more than 30 kilometres. The president of Turkmenistan encourages his citizens to come here at least once a year for a walk to improve their health. While the health effect of a yearly walk remains debatable, this is a nice way to get out of the city and see some mountain scenery.

Depending on the time of the year, come here early to escape the heat.

So as you can see, Ashgabat is a fascinating city which has lots of interesting corners. I think you can easily spend two or three days here without getting bored, maybe even more. This place is so bizarre that you just must visit it to believe that it really exists.

Getting a visa is mandatory and not easy as the country only gives out a few thousand every year. If you go with a tour company, they can help you arrange one. In fact, unless you apply for one of the short transit visas, you will need a tour company. You’re not allowed to travel around Turkmenistan without a guide.

But even if you get a guide, who will do most of the organizing for you, you should know what to expect from this country. So go and check out our guide with the top things to do in Turkmenistan.