It’s Christmas! Well, almost. It’s not far away anymore and when I went to the Christmas market with my co-workers last week, I felt inspired to write about the experience.

If you’re visiting Germany in December, you should visit at least one of them. That’s easy to do as every big city will have one Christmas market (or more). Here in Frankfurt, for example, it is impossible to miss. When going there, you can do a few things that will make your visit much more fun and enjoyable. Putting on very warm clothes, not going by car, returning your mugs… Some of them are very natural to me, others, I learned them the hard way. 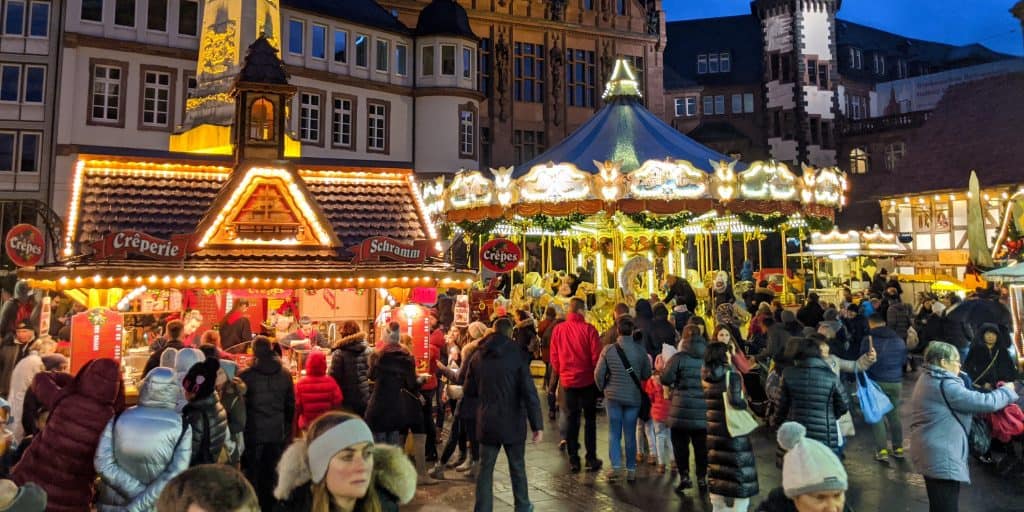 This one falls into the category of “lessons learned the hard way”. Or maybe even “lessons that I’ll never learn”. Last week, I was so proud of myself. I had taken my hat and my gloves and felt like I was prepared for everything. But after only five minutes of waiting for my co-workers to arrive, my feet had turned into icicles.

When going to a Christmas market, always wear warm clothes! That is the single most important advice I can give to you. You might spend hours outside and if you stop anywhere for a Glühwein or a snack, you will get cold. Believe me. I’ve been there far too many times to count and I keep making the same mistake. A friend even told me that she had bought toe-warmers to put inside her boots because she gets so cold at the Christmas market. While I’m not sure if that’s necessary, you should at least wear a warm coat, scarf, hat and gloves.

#2 The best way to go is by public transport 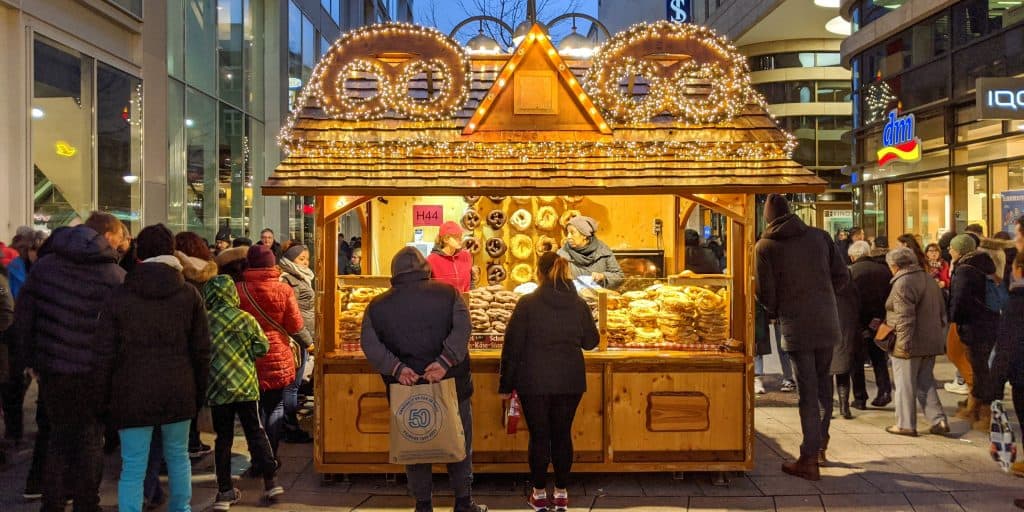 Unless you have a rental car (or came with your own), you won’t have a choice anyway. But if you do, leave the car at home. Go by public transport. Christmas markets are very busy and it’s a nightmare to try to find parking. Two of my co-workers arrived by car and they both had to park far away. On top of there being a million cars because everyone wants to go to the Christmas market, there’s also less parking available. Often, public parking areas near the city centre close because vendors set up their stalls there. 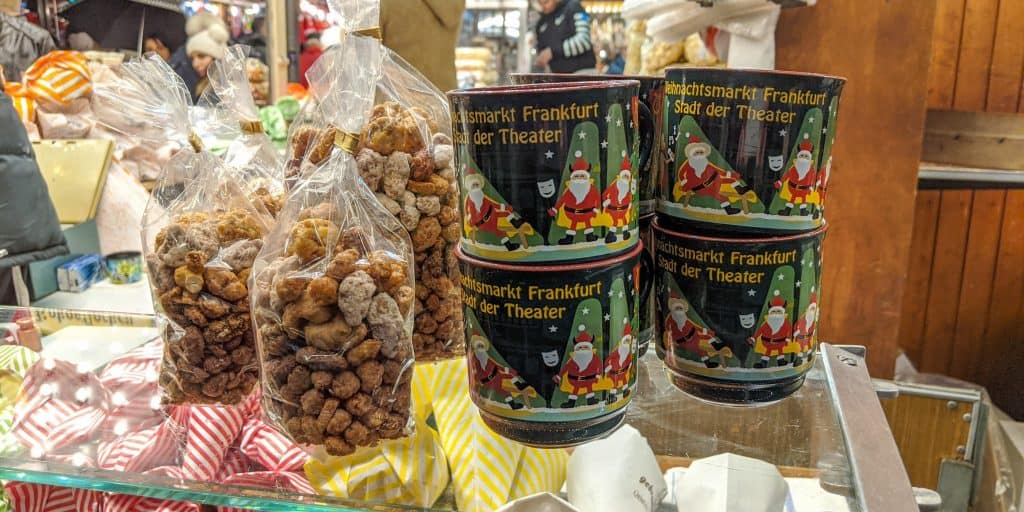 When you buy a drink at the Christmas market, you often end up paying more than you expected. Why? Because you have to pay for the mug. The deposit is called pfand and varies, but from what I’ve seen, it’s usually between 2 – 3€. You can get that money back when you return the cups, so don’t leave them just standing around.

As an alternative, if you like the cup, you can also keep it. Don’t worry, people do it all the time. Every year, most of the cities design their own Christmas market cups, so you can go and collect them. I’ve seen people here in Germany who have a collection of mugs from their hometown, with one mug from each year. If you visit multiple markets, you could also get mugs from different cities.

Talking about mugs, I think I should introduce you to the drinks that are served in them. I’ve already mentioned Glühwein, which is our most traditional Christmas drink. It’s basically hot red wine with spices and I love it. While I’m not a big fan of alcohol, Glühwein is an exception. It’s sweet, sticky and tastes like Christmas!

If you don’t like red wine, you have a few options. Some stalls offer hot white wine with spices. In Frankfurt, you can also get hot Apfelwein, which is very similar to hot cider. Or, if you don’t want alcohol, ask for Kinderpunsch. That’s a hot juice with spices, usually blueberry or cherry. Just like Glühwein, it’s sweet and sticky and it warms you up perfectly.

#4 One city can have multiple Christmas markets 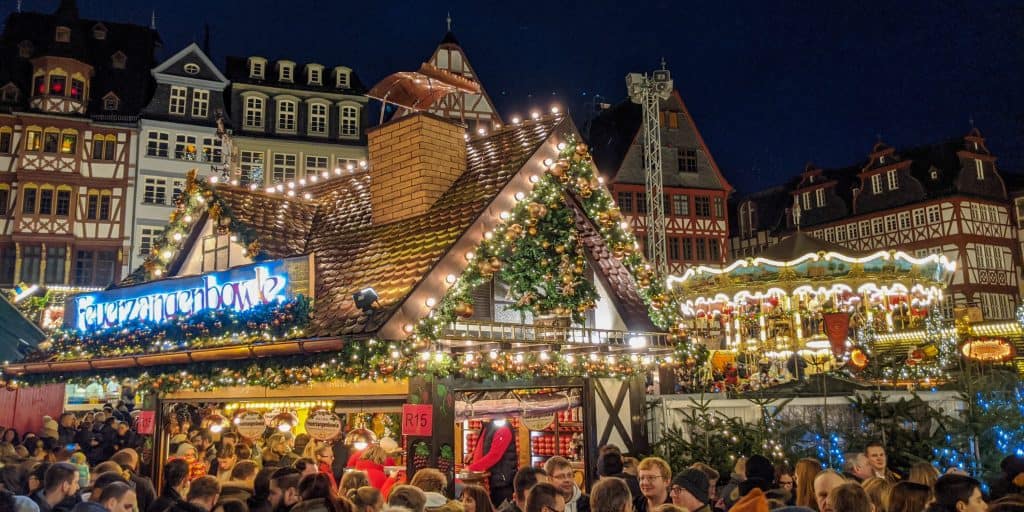 And small towns will have their own Christmas markets, but it might only be open during the weekend or for a few days in December. I highly recommend that you go away from the crowds and try to find one of the smaller markets. Back when I still lived in Rostock, up in Northern Germany, there was always a medieval Christmas market. You had to pay a small entrance fee but it was totally worth it. People there dressed up in medieval clothes, served food that you couldn’t find anywhere else at the market and had some fun activities and beautiful handicrafts.

Also, some smaller squares close to the main market are full of stalls. It’s usually fun to go there to get away from the crowds and discover something different. And as I mentioned, smaller towns have their own Christmas markets, too. When planning your trip to Germany, try not to stick only to big cities but also visit some of the smaller ones. They’re more intimate, full of beautiful architecture and totally worth a side trip. 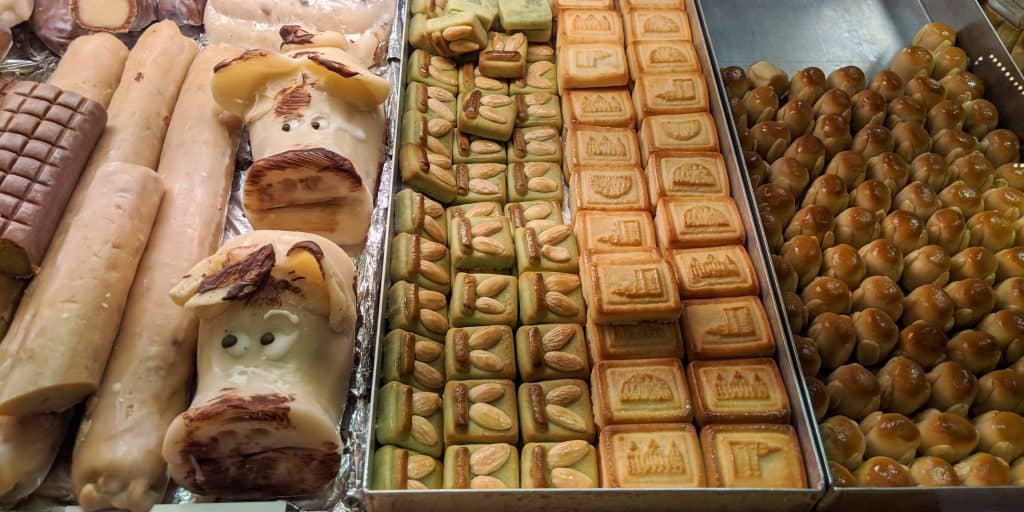 You just need to find it. There is some food that you can find at every Christmas market around Germany. Glühwein and sausages, for example. But then there are also local specialities. Here in Frankfurt, for example, that’s Bethmännchen, a Christmas cookie made from marzipan and almonds. I didn’t even know they existed until I moved here. Another thing you shouldn’t miss out on when coming to the Christmas market in Frankfurt is hot Apfelwein. It’s similar to hot cider but not quite the same.

When I lived in Rostock, I would always look forward to trying some Finnish honey. Okay, maybe that’s not a very local thing but the stand was there every year and I’ve never seen it at any other Christmas markets. More typical for the region would be any food containing fish, like bread rolls with herring (which you can also find in Hamburg if you happen to be there).

Oh, and talking about fish. Have you ever heard about Flammlachs? I had no idea that existed until my co-worker started raving about it last week. It’s salmon roasted by the fire. We went to get some and it was absolutely delicious! I know for sure that I’m going to go back there this month, to get some more.

So I urge you to walk around and ask around, to find some of the local specialities and most delicious dishes that are served at Christmas markets.

Remember how I told you to get away from the city centre? The further you go, the less crowded the market. The Christmas market here in Frankfurt gets on average 3 million visitors. You can easily imagine how crowded it gets. The best time to go, if you want to avoid the crowds, is in the early afternoon during the week. Enquire about opening hours first, but in most bigger cities, that shouldn’t be a problem. Here in Frankfurt, for example, the market opens at 10 am during the week and 11 am on Saturdays.

If you stay for a few hours, you will see more and more people arriving. That’s because we like to go to the Christmas market with our co-workers. It’s normal for departments to have a Glühwein together. Most of the time, when meeting friends for a drink in December, we will end up at the Christmas market. Why go to a bar when you can also freeze in the cold?

#7 Credit cards are not accepted 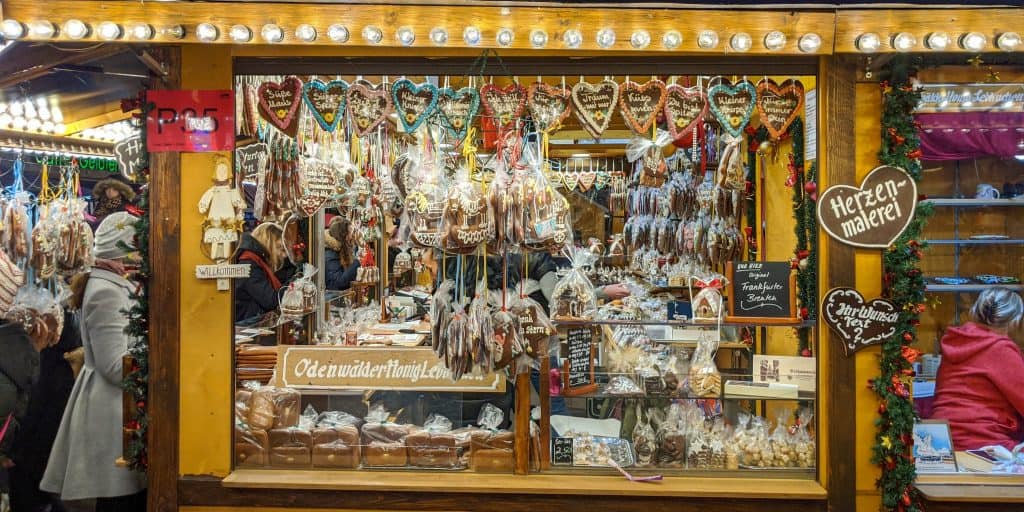 There are exceptions to that rule and some stalls will accept credit cards. But if you’re just buying a drink, you should take cash. Germany is still mostly cash-based and while acceptance of credit cards gets better, a lot of places expect you to pay with cash. Either that, or you might have to pay a credit card-fee. So stop by an ATM and withdraw some Euros to pay for your Glühwein.

And that’s it, that’s the most important things that came to my mind while I was warming my hands on a mug of Glühwein. Are you planning on visiting a Christmas market? Is there anything else you’d like to add to our list? We’d love to hear from you!

If you’re still looking for Christmas gifts, by the way, check out our guide to the best gifts from Europe! 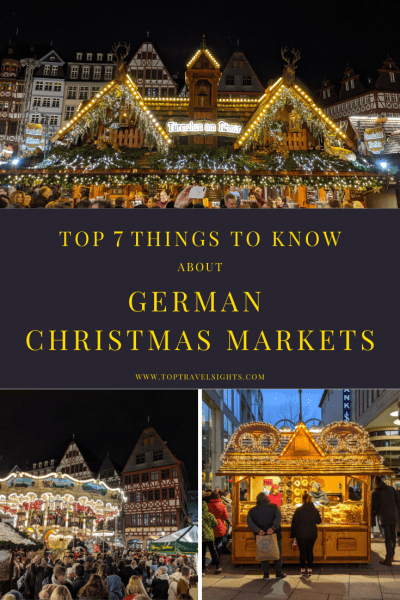