If you asked me to choose a favourite island on Galapagos, I would have a hard time. I went to three of them, San Cristobal, Santa Cruz and Isabela, and loved all of them. Each was special in its own way. But if I absolutely had to decide, I think I would go for Isabela because it was just a bit more special than the others.

Isabela is the island of marine iguanas, blue-footed boobies and pink flamingos. It has endless white beaches and a small town consisting of dirt roads. Upon arriving, we were greeted by sea lions who had taken a rest in between the mangroves.

Isabela is just perfect. And so you know how to spend your time here and make sure you don’t miss any of the highlights, here is what I recommend doing:

#1 Enjoy the beach on Isabela 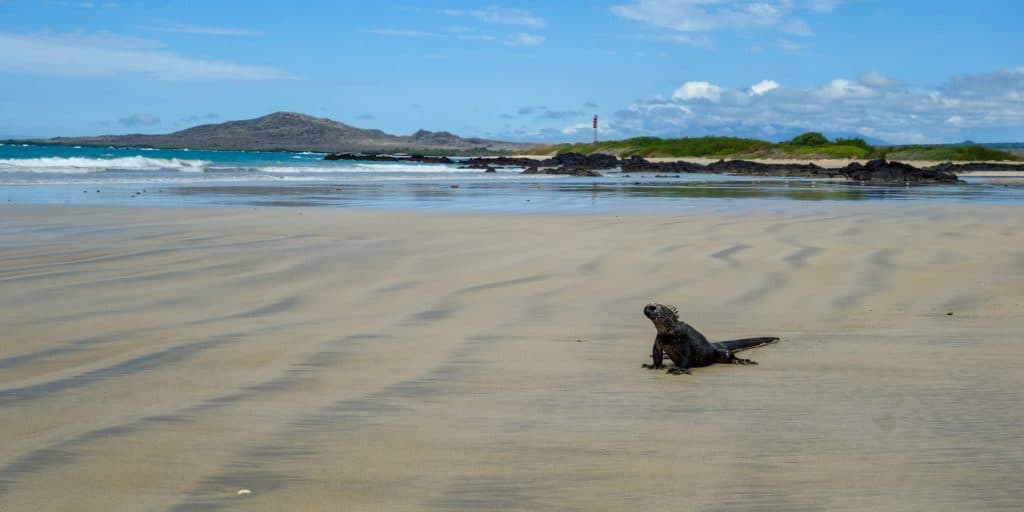 When I planned my trip to Galapagos, I didn’t know about the beautiful white beaches. My main reason for visiting was that I wanted to see all those strange animals that exist only out here in this archipelago. So imagine my surprise when I arrived on Isabela and went down to the shore, to see an endless white beach stretch out in front of me. The scene looked as if it had come straight from one of those cliche ads that want to convince you to travel to far-away places.

What I loved most about the beach, though, wasn’t even the white sand and the clear water. It was the marine iguanas. On the three islands that I visited, this was the best place to see them. They were everywhere, resting in the sun, swimming in the water, running up and down the beach on their short legs.

My friend and I had planned to hike to the Wall of Tears (more about this one further below). We had estimated that it wouldn’t take long, but that was because we hadn’t known that we would spend the next two hours taking pictures of iguanas and pelicans. Oh, and crabs. Did I mention those colourful crabs that like to rest on the rocks at the end of the beach?

The beach that stretches out from Puerto Villamil towards the West is a must-see on Isabela Island. And if you keep walking, you will come to La Playita. This is where we went for a swim on our way back from the Wall of Tears. It has benches so you can leave your stuff there and sit down after your swim and watch the iguanas that hide underneath the trees next to you.

#2 Hike to the Wall of Tears 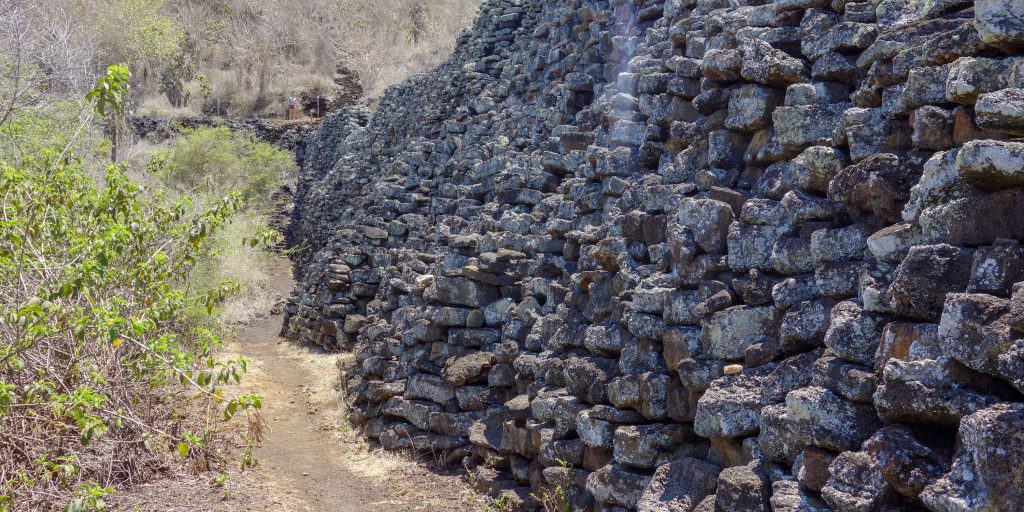 This one goes hand in hand with the beaches. If you continue walking westwards after the beach finishes, you will eventually end up at the Muro de las Lagrimas. Along the way, you have the chance of seeing birds and even giant turtles. The landscape turns more and more dry until you eventually arrive at the wall.

The Wall of Tears was constructed between 1945 and 1959 by prisoners. Before scientists developed an interest in the islands, Isabela was used as a prison colony. To keep the prisoners busy (and with no apparent other purpose), they were forced to construct a stone wall. If you have hiked to the Wall of Tears, you will have experienced the heat out there. Imagine carrying heavy stones here, without proper water supplies. The working conditions were so horrible that thousands are said to have died in the construction of this pointless wall.

These days, it serves as a memory to Isabela’s dark past. You can climb up to the very top and enjoy a view over the island. It was only from up here that I fully understood how huge and how dry Isabela is.

The total distance is about 5km one way, so make sure to take enough water. It gets very hot in the middle of the day. To make things easier, you could also rent a bike.

#3 Go on an excursion to Las Tintoreras 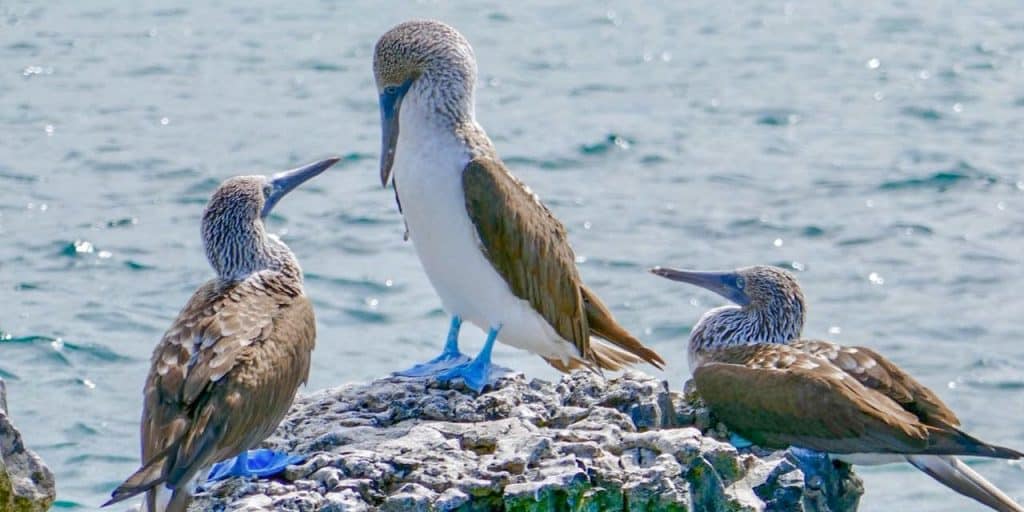 While staying on Galapagos, we found it easy to visit most places by ourselves without needing to pay for an expensive tour. Las Tintoreras was an exception and it was totally worth it. This half-day trip took us to the tiny volcanic islands just off the coast of Isabela. We started by looking for blue-footed boobies and penguins and were quickly rewarded. Perched on a tiny rocky outlet, we saw a couple of birds with bright blue feet and beaks. Why evolution turned them blue, I have no idea, but they are very funny to watch.

Our next stop took us to a snorkelling spot. I will be honest with you. Visibility wasn’t great. I did my diving license in Thailand and it was a completely different world. But snorkelling on Galapagos is still special, mainly because of the animals we got to see. Besides large parrot fish, I spotted both a manta ray and a shark swimming past. Oh, and then there were the two sea lions that playfully swam around us for a while before getting bored and continuing elsewhere with their game.

Our next and last stop was on the Tintoreras Island itself. We were greeted by a sea lion that had stretched out on a bench next to the pier. The island looked as if we had stepped on a different planet. But even though barely any plants grow on the salty, volcanic rock, it is full of crabs and marine iguanas. There were so many iguanas that they were even lying on top of each other!

Las Tintoreras might be more expensive than hiking to the Wall of Tears or spending a day at the beach, but it is money well spent. If you only do one excursion on Galapagos, make it this one. 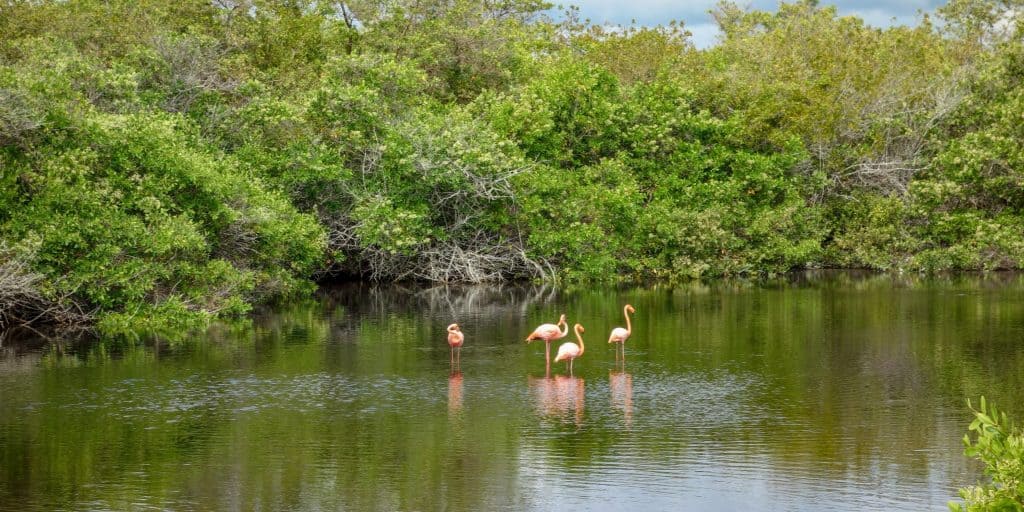 I love flamingos. And I think one of the reasons why I loved Isabela so much, besides the laid-back atmosphere and the beautiful beach filled with marine iguanas, were the flamingos. I didn’t get the chance to see those colourful birds on any other island that I visited.

According to my guidebook and a few blog posts that I had read, you can see flamingos when hiking to the Wall of Tears. So imagine my disappointment when we stopped at every single lagoon and we couldn’t find a single bird there! It wasn’t until two days later, when we walked to the Tortoise Breeding Centre, that we realised we had been looking at the wrong place.

If you follow the wooden boardwalk up to the Breeding Centre, you are guaranteed to see flamingos. They live in the lagoons up there, fishing for crabs and posing for beautiful pictures. Did you know that they are not naturally pink but their pink colour comes from the crabs they eat? That means that the younger they are, the more grey they appear. It’s only after they’ve reached a certain age that they will turn more and more pink. 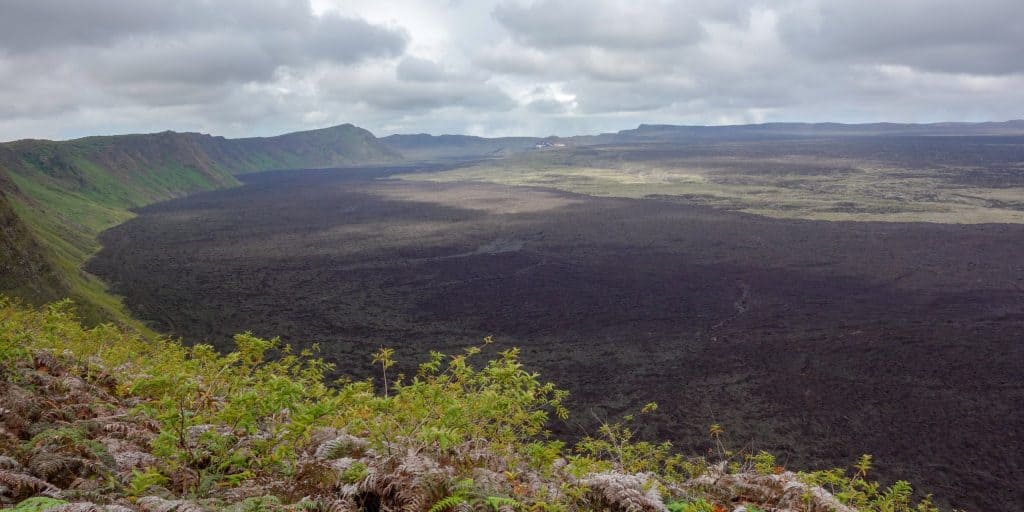 Do you want to hike to the second largest volcanic caldera in the world? Then you need to hike the Sierra Negra volcano. Isabela’s most active volcano is an impressive sight that no pictures can ever do justice. I could not even fit the crater into my photos. Imagine standing at the rim of the crater and barely being able to see the other end. All you can see is smoke rising in the distance, a sign of the volcano’s activities.

The last outbreak was in June 2018, following two strong earthquakes. Fortunately, nobody was hurt, but a couple hundred people, who live on the slopes of the volcano, had to be evacuated.

But back to the caldera. With a diameter of around 9km at its widest point, its dimensions are hard to grasp. Tours can take you to a viewpoint from where you can try to understand its enormous size. If you decide to do a half-day walk, like we did, you will have a lunch break up there before going back down again.

You also have the option of going on a longer hike that can take you into the crater. If you have enough time and money, that is what I highly recommend. It is your chance to walk on this moon-like landscape and get to know a very different world on Galapagos. 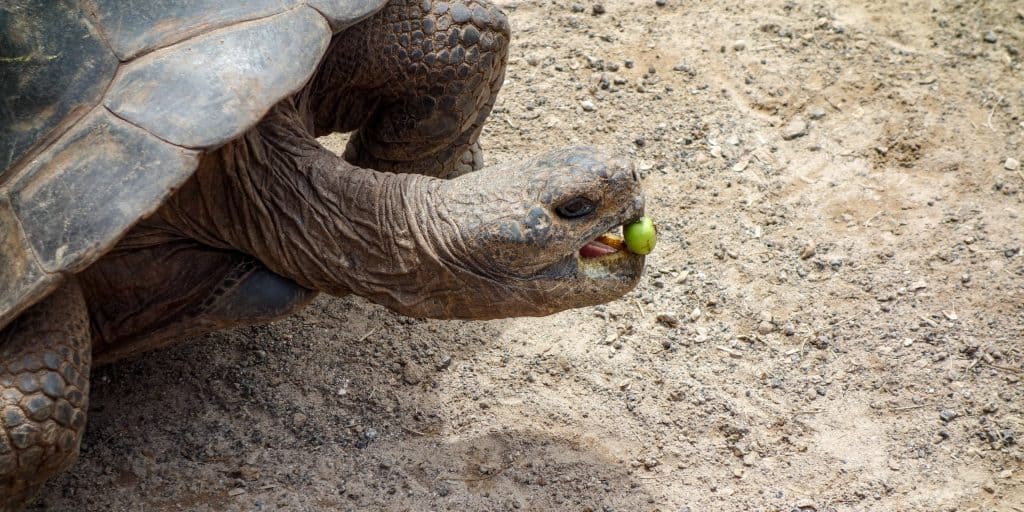 If you want to see giant tortoises, you have to stop by the Giant Tortoise Breeding Centre. While there are chances that you can see those animals in the wild (we saw a giant tortoise on our way to the Wall of Tears), the breeding centre is the only place where you are guaranteed to spot them. And not just one. Here, you will find a dozen huge tortoises, seemingly waiting for you to take pictures of them.

It is hard to believe but a few hundred years ago, a quarter million tortoises lived in the Galapagos Islands. These days, their numbers have been reduced to a few thousand, with many species having gone extinct. Back before people became aware of conservation and the need to protect our nature, sailors stopped in Galapagos to hunt tortoises. They were excellent food supplies since they could be transported alive and then killed just before being eaten.

These days, breeding centres located on the big islands try to restore the population. They look for tortoise nests, collect the eggs, hatch them and take care of the baby tortoises to increase their chance of survival, and then eventually release the tortoises into the wild.

The Giant Tortoise Breeding Centre can be reached from Puerto Villami via a boardwalk. While walking here, you also have the chance to spot flamingos and marine iguanas.

If you have not gone on the Las Tintoreras tour (or even if you have and you want another chance at spotting wildlife), you can go snorkelling at Concha de Perla. This bay is located next to the port of Puerto Villami and can be reached via a short path that takes you through mangroves. You will need to bring your own snorkelling gear since there are no rentals around here, but you can pick it up at one of the many shops in town for a couple of dollars.

I unfortunately did not have the time to check out Concha de Perla myself but I have talked to many people who have been there and they all loved it. You can see anything from sea lions to marine iguanas and manta rays. If you go a bit further out (be careful during low tide so you don’t cut yourself on the sharp volcanic rocks), you can even be lucky and see sea turtles.

I hope you found this guide useful and have gotten some ideas on what to do on Isabela Island. I’ve tried including a mixture of budget activities and more expensive tours, but as you can see, you don’t need to be rich to enjoy the Galapagos Islands. If you’re not convinced yet, check out our budget guide to visiting the Galapagos Islands. While here, I also highly recommend that you visit San Cristobal (click here to find out what to do there) and Santa Cruz.

All flights to Galapagos leave either from Quito (with a stopover in Guayaquil) or directly from Guayaquil. Both cities are worth a visit but there’s also so much more to Ecuador.

If you have been to Isabela or are planning on going, please leave a comment. I appreciate any feedback. What did you do and what did you enjoy? Did the Sierra Negra volcano change after the recent eruption in June? 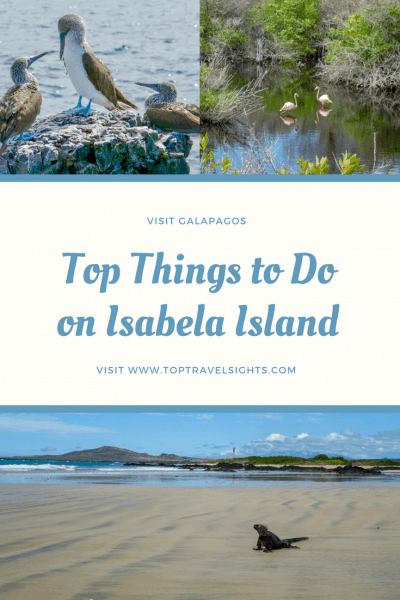