Many visitors to Estonia stay in Tallinn and skip the rest of the country. That’s a shame because the country has so much more to offer! As we were coming from Riga, we started our Estonian trip in Tartu, a cute university town where you can easily spend a day or two.

We had initially planned on spending just one night but then decided to stay for two. It was a great decision as even during the time we had, we didn’t manage to see everything we wanted. Next time we come back, I would love to go to the National Museum of Estonia. It is so big that apparently, you can easily spend 3-6 hours in there.

So if you have enough time, go and check it out. But also make sure that you don’t miss any of the following things to do in Tartu: 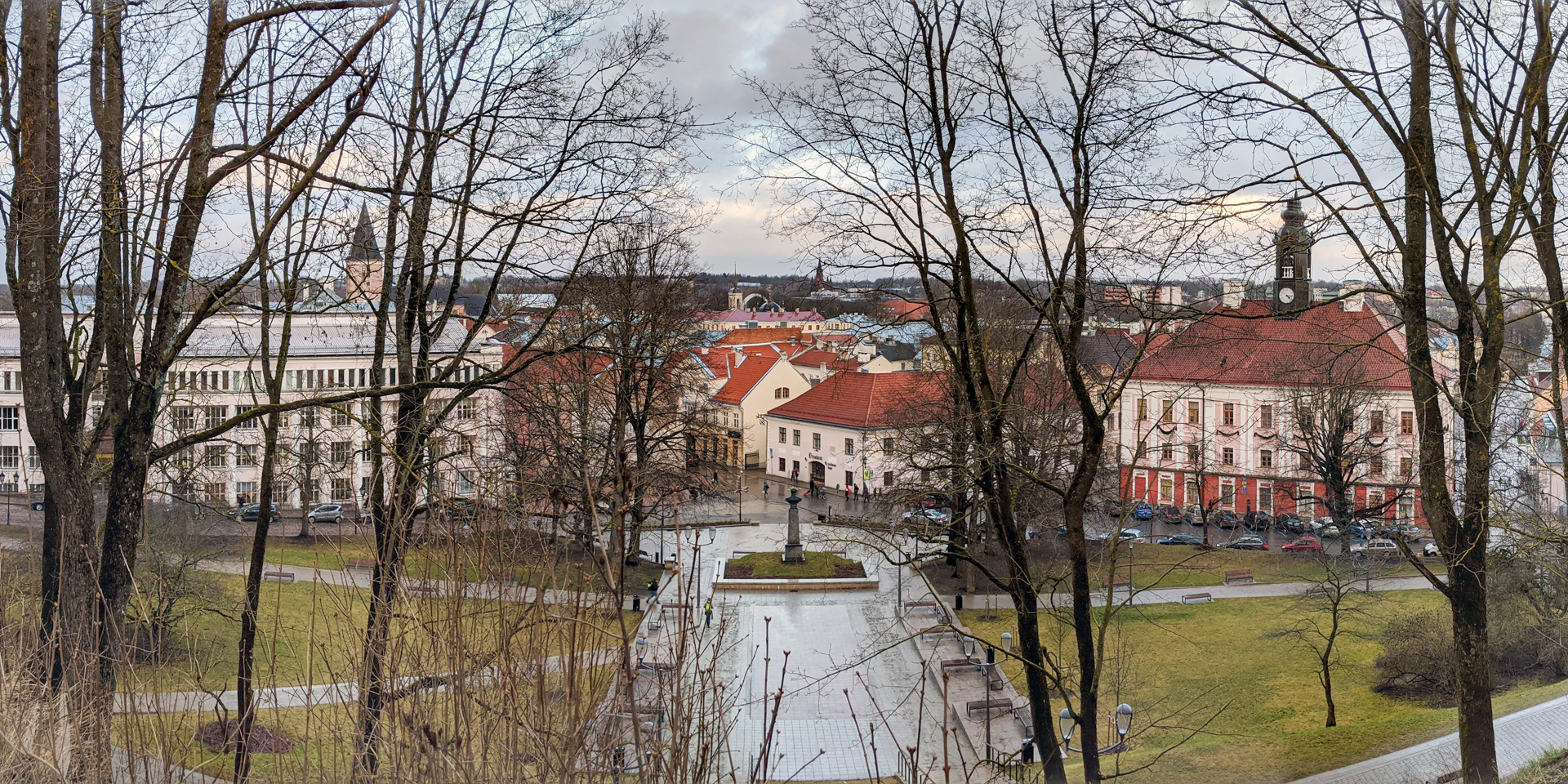 If you walk east from the city centre, you will end up on Toome Hill. Historically, this hill was used by the military, as you could see the whole surroundings from here. Nothing remains from this time period. Next, the university moved here, so when you walk up to Toome Hill, you will find university buildings as well as a park.

What’s cool about this hill is that it’s divided in two by a street and there’s a bridge you can take to cross. From its top, you have a nice view down towards Tartu. You should also go for a stroll through the park because there are more viewing platforms from which to take nice photos.

#2 Visit the University of Tartu Museum 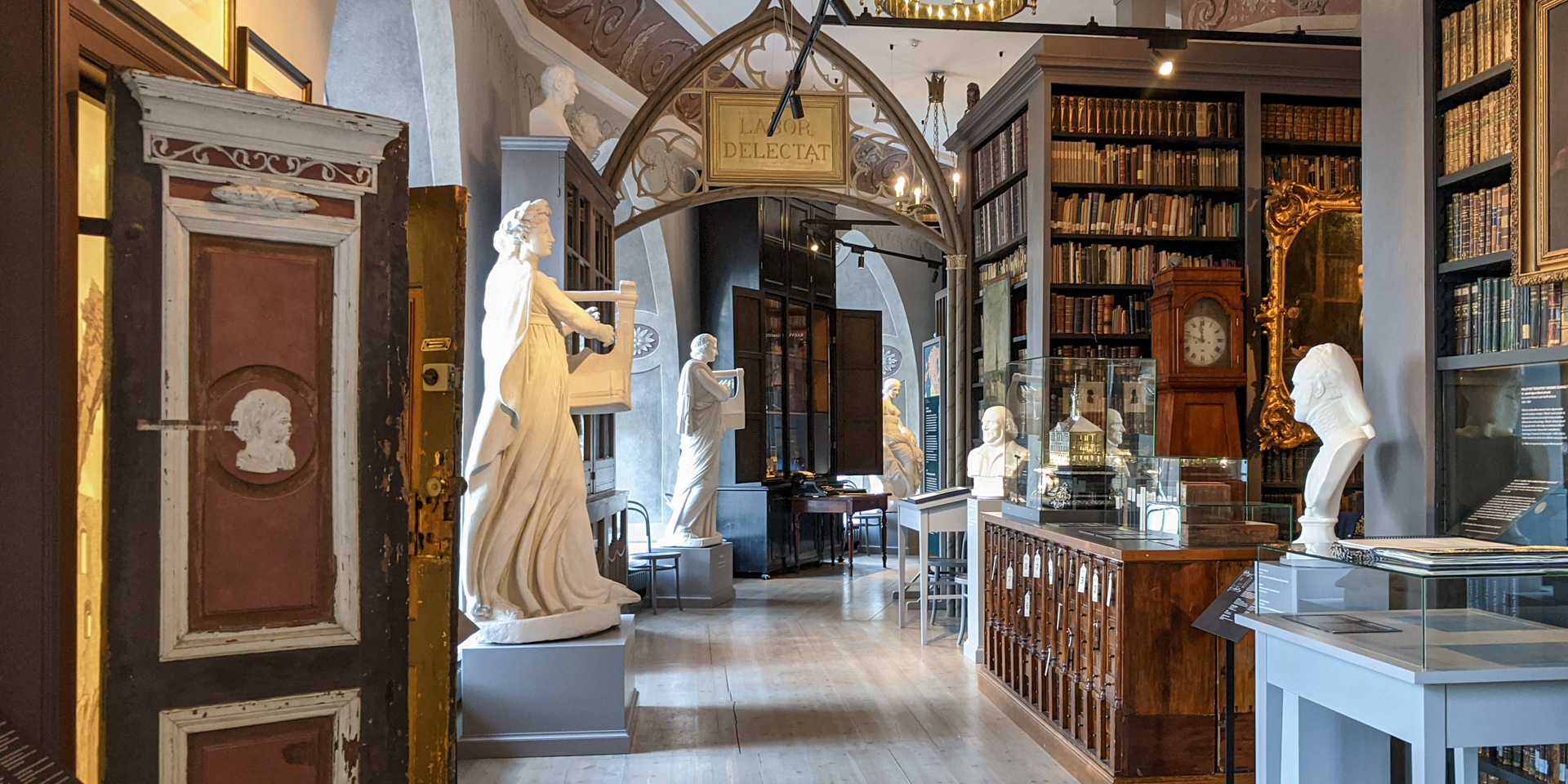 On top of Toome Hill, you can find the University of Tartu Museum. The museum was much larger than we expected, spreading out over multiple floors. On the second floor, we found a temporary exhibition that was, to be honest, a bit strange. It didn’t help that labels were only in Estonian and even though there was an English booklet at the entrance, we couldn’t quite understand what it was about.

One floor higher, we saw the treasures of the University of Tartu, which ranged from a giant bucket full of old coins to a slice of brain in a jar. It was quite interesting, but my favourite was one floor above that. The former library now houses a very large exhibition full of old books, globes and facts about the university.

Oh, and while in the museum, make sure to use the elevator. It is the oldest one in Tartu and dates back to 1928. Push the button to call it, then get inside and make sure to read the instructions to get it to work. 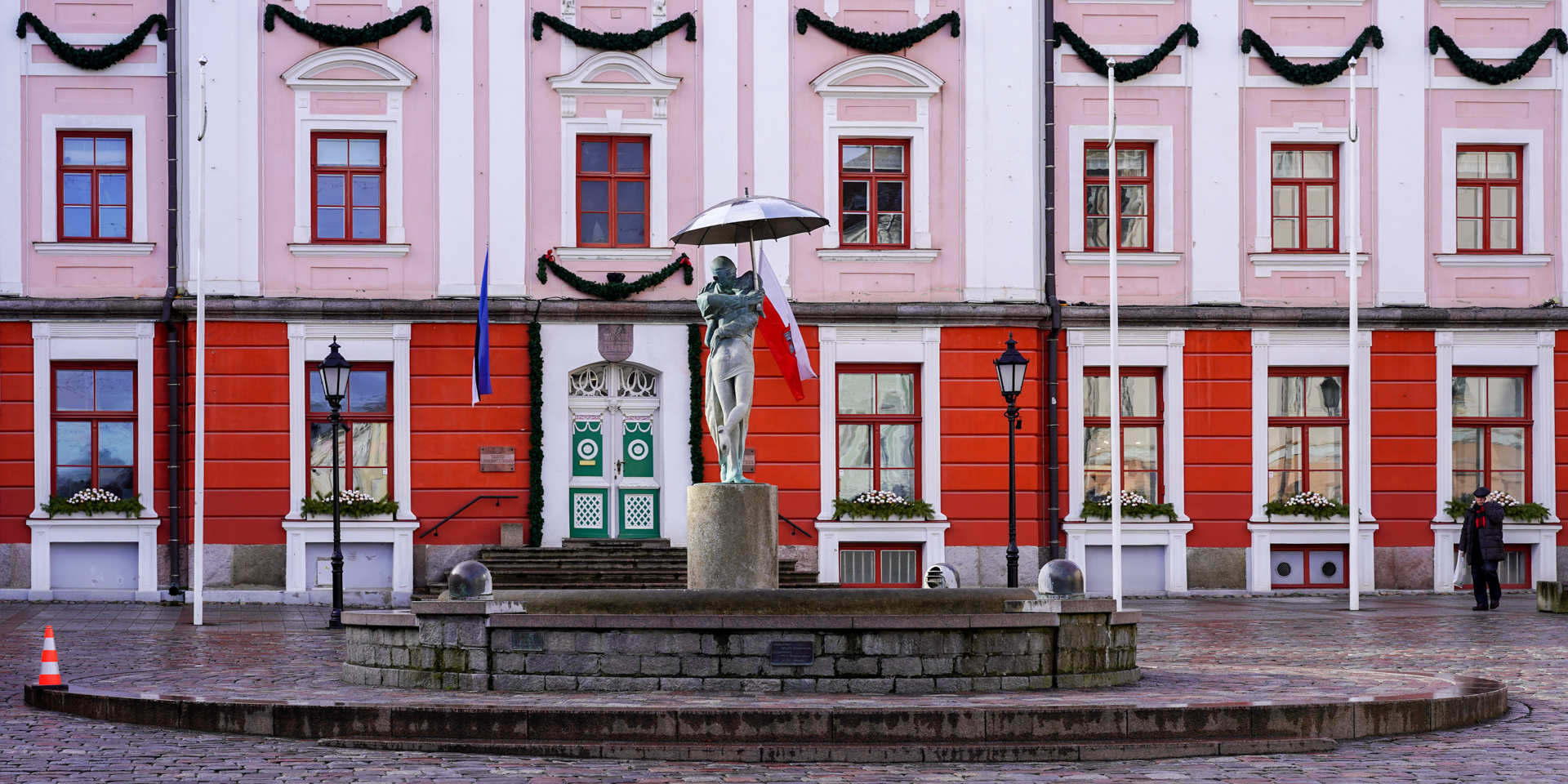 One of the most beautiful places in Tartu is the square in front of the Town Hall. Here, you can admire the architecture of the surrounding buildings or take a look at the Kissing Students fountain. There’s been a fountain here since 1948, but the statue dates from the 90s. Legend has it that it is good luck for newlyweds to visit.

Also on this square, at the opposite end of the Town Hall, you can find a giant yellow National Geographic frame. Don’t ask us why it’s here. Just use it to nicely frame the square while taking pictures.

#4 Walk through the ruins of Tartu Cathedral 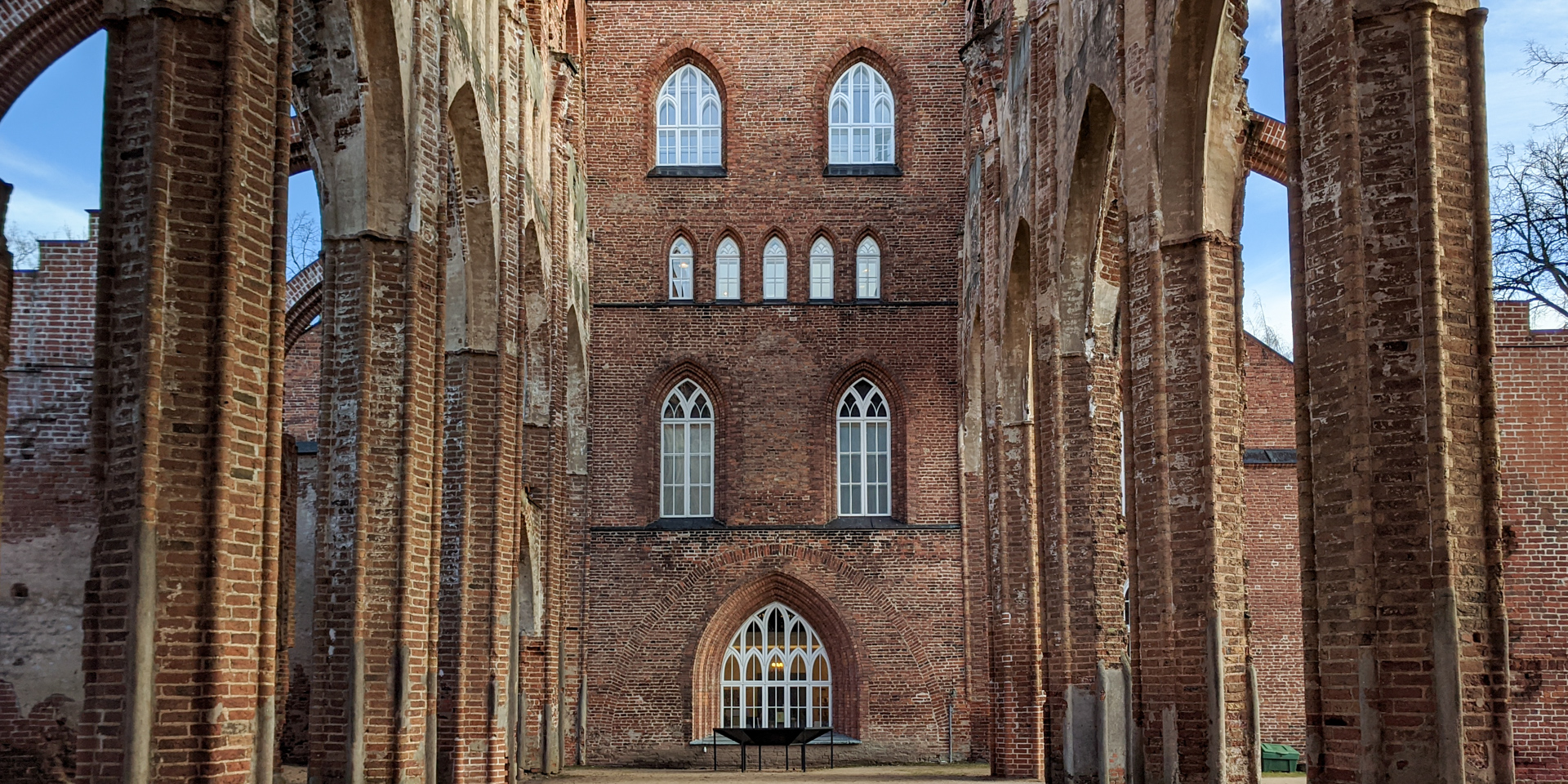 Up on Toome Hill, next to the Tartu University Museum, you can find the ruins of Tartu Cathedral. This cathedral was built in the 13th century and finished in the 15th, but it didn’t stand on top of that hill for long. In the 16th century, it got damaged during the Livonian War and was never rebuilt.

At one point, an architect had plans of incorporating the ruins of the cathedral into a new university building. However, the city never went through with his plans which is why you can still visit this place. While standing there, just imagine how big the cathedral must have been back in the day!

If you come in summer, you can climb the stairs up to the viewing platform. However, as we were here in February, it was closed and we could only look at the stairs from below. I imagine that the view from up there must be quite nice, as it is one of the highest points you can go to. 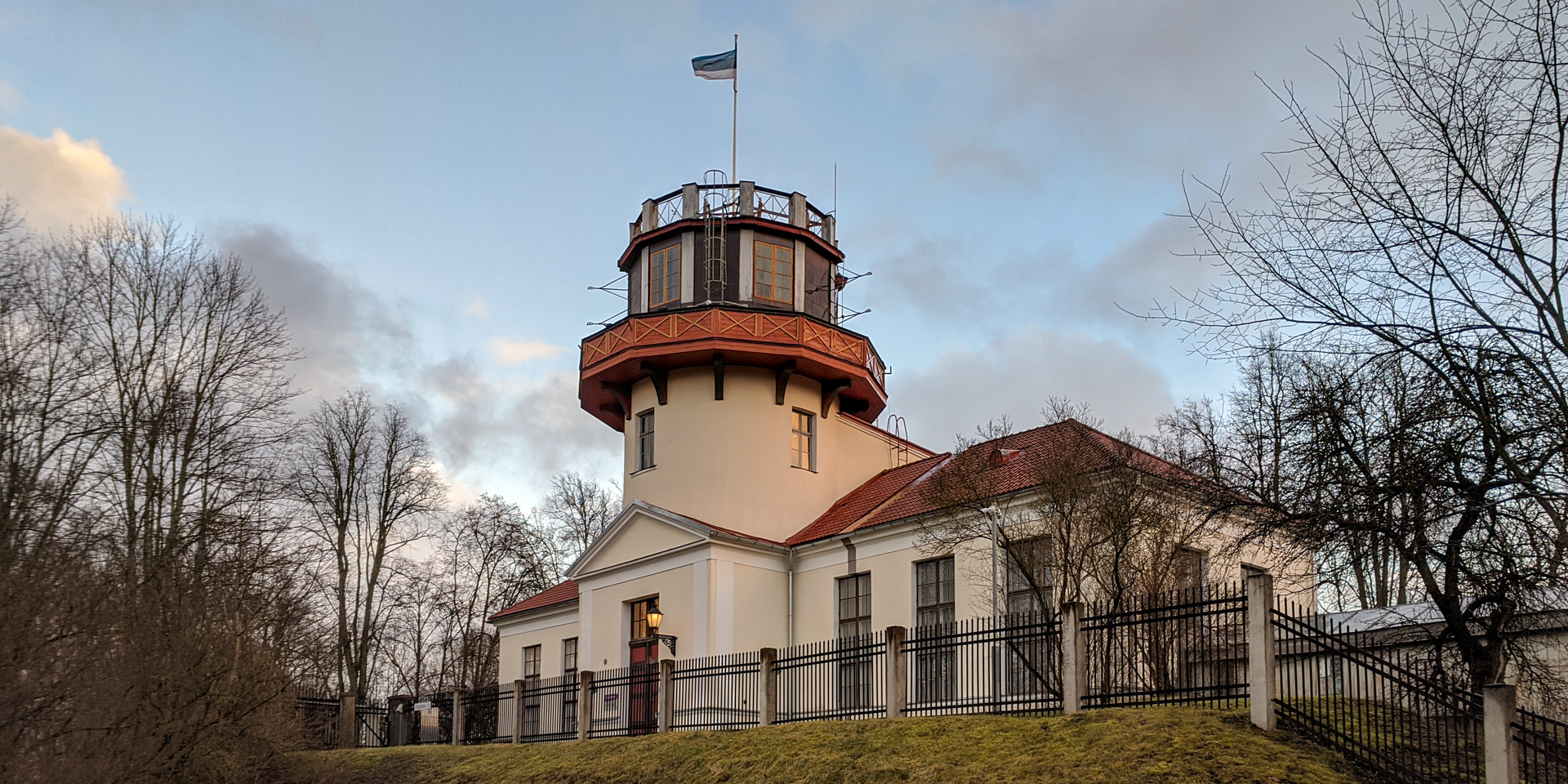 Talking about things to do on top of Toome Hill. While up here, you should totally go to the Old Observatory. This place is a UNESCO World Heritage site due to the Struve Geodetic Arc that runs through it. The arc is a chain of survey triangulations that runs from Hammerfest in Norway all the way down to the Black Sea. It is the first accurate measurement of a meridian and allowed Friedrich Georg Wilhelm von Struve to establish the exact shape and size of the Earth in the 19th century.

Struve conducted much of his research here in this observatory. If you decide to go inside, you will get to see lots of old telescopes, which were very cool. We also went up to the tower where we saw yet another telescope (this one much more giant than the other ones) and learned about the measurement of time in Estonia. 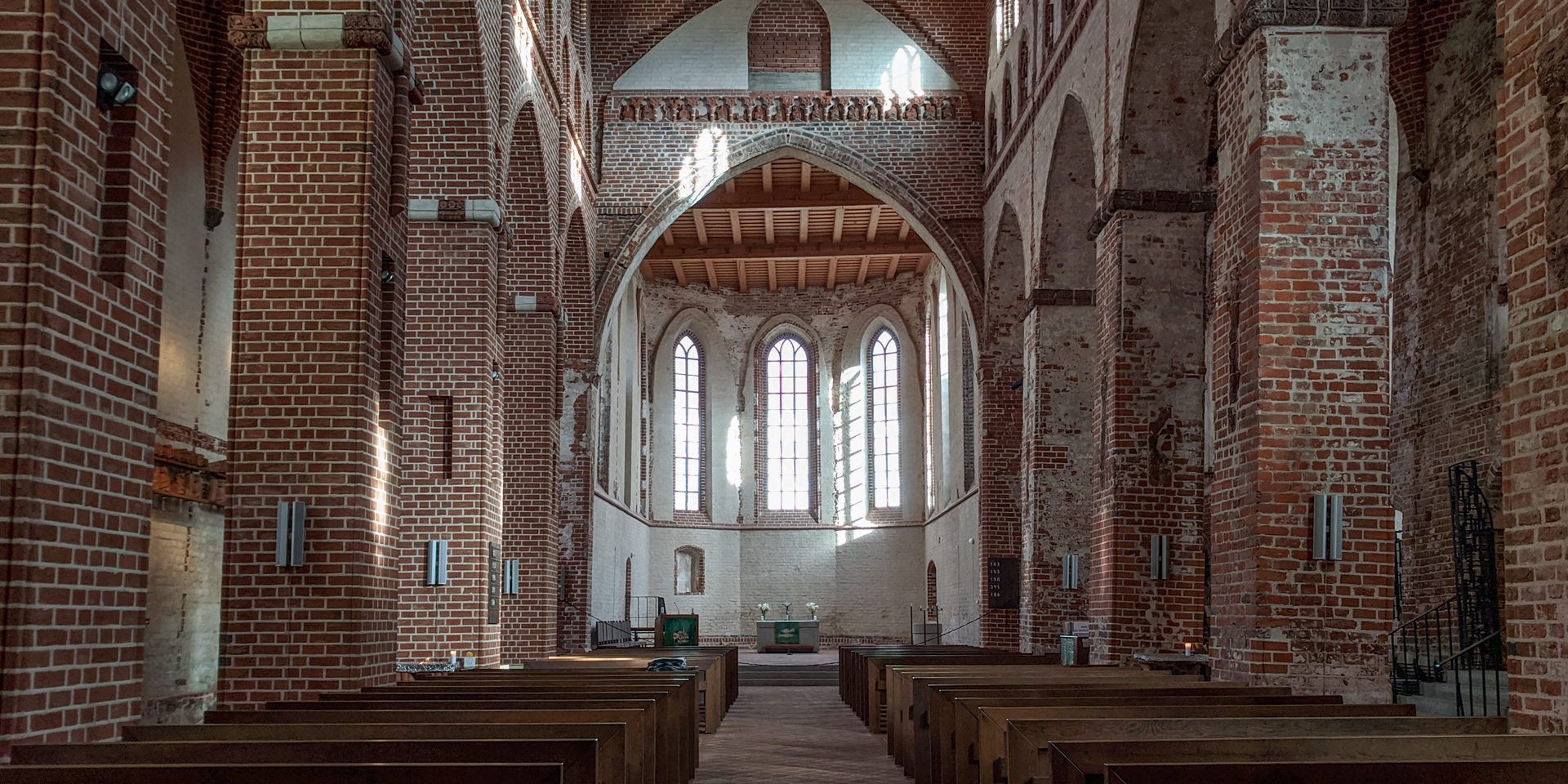 St John’s Church is a pretty cool brick church located in the Old Town. Entrance to the church itself is free, but you have to pay a small fee if you want to take pictures.

The design of the church, with its red bricks, is quite unusual. It might not be as decorated as other churches we’ve seen, but it has its special charm. Also, you can find nearly 1.000 terracotta sculptures in here.

If you want to, you can climb up to the viewing platform to enjoy a view of Tartu from above. 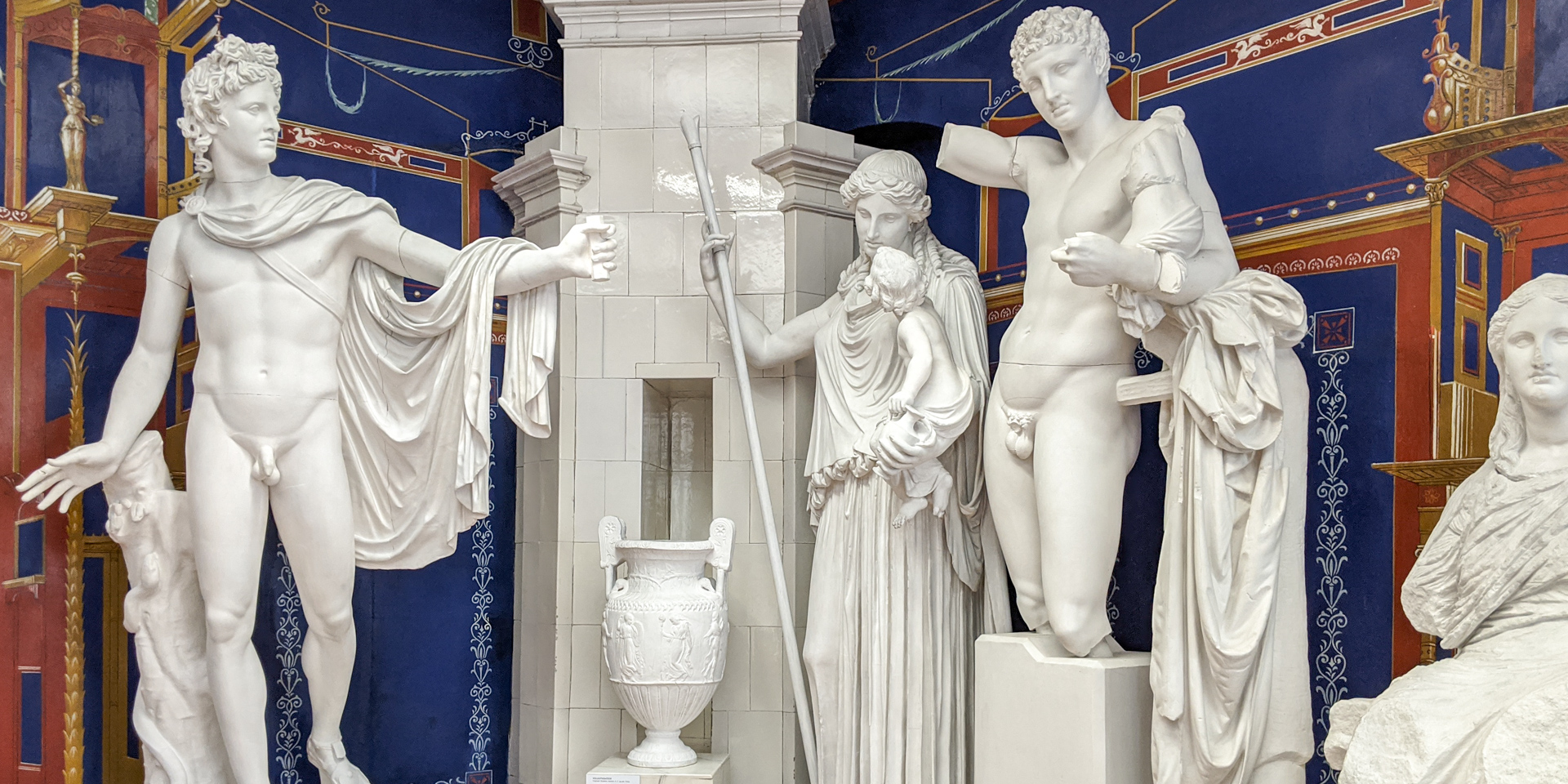 I am not sure if we would have gone into this museum if it hadn’t been included in our joint ticket. But I’m quite glad we went here because it turned out to be pretty cool. The museum is full of plaster replications of old Roman statues, so you can take some great pictures in here.

The highlight, though, is the tour up to the holding cells and into the assembly hall. The assembly hall is a beautiful room that you need to see. But my favourite was the holding cell. Back in the time, there used to be five of them but today, only one remains. These rooms were basically university prisons and you could be sent to one for anywhere from one night to three weeks. Punishable offences included not returning library books or swearing (which would give you up to about a week in one of those rooms).

Over the years, students and staff who got bored inside those rooms left their drawings on the walls of the cell. Those drawings got destroyed by a fire in 1965, but art students restored many of them and you can see photos of how they used to look.

There you have it, 7 amazing things to do in Tartu. If you’re planning on visiting the University Museum, the University of Tartu Art Museum and the Old Observatory, you should buy a combined ticket that gives you access to all three of them. You don’t have to go to all three in one day, it remains valid on the next day as well.

What we most enjoyed is that the centre of Tartu is quite small, so everything is within walking distance. Plus, the streets are pretty so it’s fun to walk around.

As we said, if you have more time, you could go and check out more things like the National Museum of Estonia or the upside-down house that’s located just next to it. If you do, or if you found the above advice useful, please let us know in the comments. 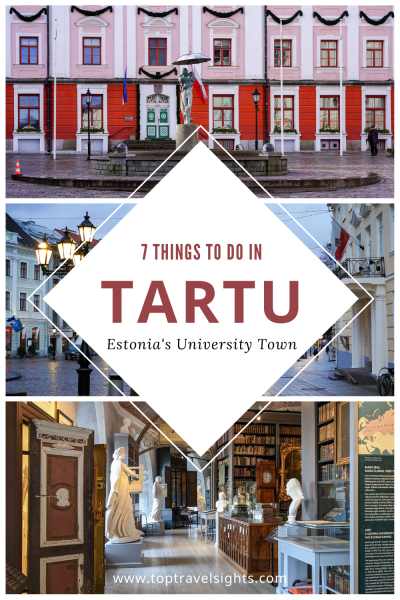 How to Visit the Northernmost Point of Africa