Have you watched Game of Thrones? I haven’t, and it wasn’t until our guide kept making Game of Thrones references that I found out it was filmed in Northern Ireland. Apparently, the TV show is one of the reasons why this region has become more and more popular with tourists. But no matter whether you’re a huge fan or not, you’re going to love this region of the Irish Isle and should visit.

Northern Ireland has so much to offer! From brilliant shades of green to stormy coastlines and bustling Belfast, you’ll find lots of great things to do and see. If you’re short on time, you are in luck because it is possible to come here on a day trip from Dublin. It’ll be a long day, a bit exhausting, but also totally amazing.

You have two options for your trip. The first one is to hire a car and drive around by yourself. This way of travelling has the advantage that you can set your own pace and your own itinerary. The second option is to go on a bus tour from Dublin. That’s what Daniel and I did because we wanted to have a guide. I like travelling around with a local, and especially on the Irish Isle, it was very interesting as he told us lots of stories about the troubles. Budget-wise, if you’re on your own, it might be cheaper to join a guided tour. Also, you’ll meet lots of people. If you’re travelling with a partner or with friends, the rental car will most likely be the more budget-friendly option.

No matter how you are going to explore Northern Ireland, here are the things you shouldn’t miss:

#1 Get blown away at the Giant’s Causeway 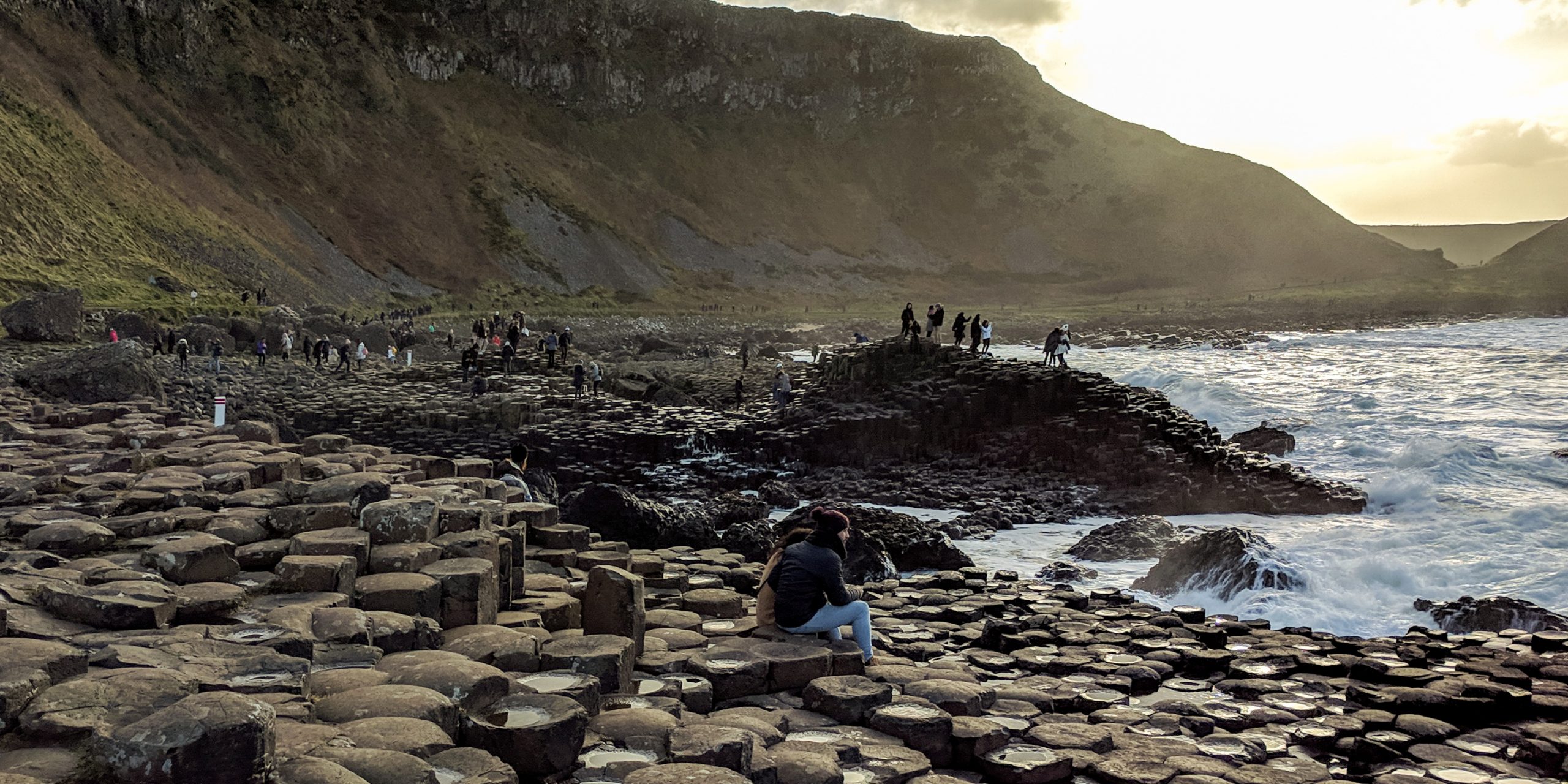 The legend goes that the Irish giant Fionn and the Scottish giant Benandonner got into a fight and built a causeway across the sea to reach each other. When Fionn saw the size of Benandonner, who was way larger than him, he quickly turned around and ran to hide in his wife’s house. Fortunately, his wife was quite clever. She dressed up Fionn as a baby and, when Benandonner appeared at the home, told him that she was alone with her son and hadn’t seen her husband in a while.

Benandonner took a look at the “baby”. If that was the offspring, how big would the father be? No way was he getting into that fight! So he ran back to Scotland, destroying most of the causeway. The remains, you can still visit them today.

There is, of course, also a scientific explanation for how the Giant’s Causeway came to be but isn’t the legend far more interesting?

You can visit the Giant’s Causeway free of charge but if you want access to the parking lot and the visitor centre, you will have to pay an entrance fee. That fee also includes an audio guide, which I highly recommend. I enjoyed walking down to the Giant’s Causeway and listening to local legends along the way.

Talking about walking. Around the Giant’s Causeway, you can find lots of hiking trails. If you have enough time, you should go on a long walk. Unfortunately, when we visited, we could only go down to the stones, listen to local legends and then take hundreds of pictures. Those stones are really photogenic!

#2 Walk the bridge to Carrick-a-Rede 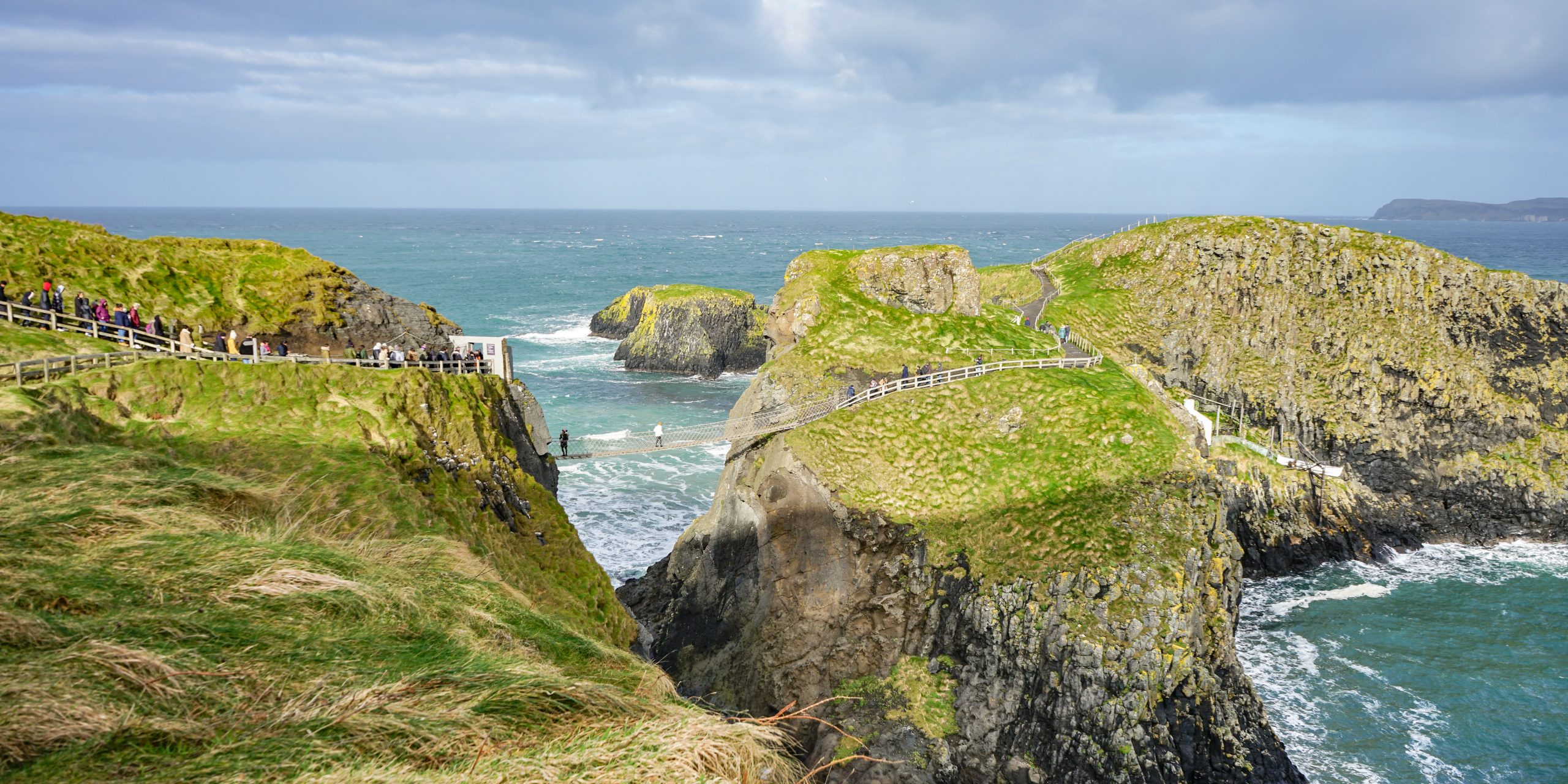 When you stand at the shore, looking at the hanging bridge leading over to Carrick-a-Rede, try to remember this place about 250 years ago. That’s when salmon fishermen built the first bridge over to the island. I am amazed by their skills and still cannot comprehend how they managed to do that. Even with today’s bridge, crossing over to Carrick-a-Rede remains a small adventure.

Back in the day, the tiny island was used by fishermen during the salmon season. These days, as the number of salmons has dwindled, it remains purely a tourist attraction. Back in the 60s, fishermen could catch up to 300 salmon a day. In the early 2000s, that number went down to 300 during the whole season.

But lucky for you, this area remains very pretty. You will first walk along the cliffs, high above the shore. Then, when you reach Carrick-a-Rede, you have to cross a hanging bridge swinging about 30m above the sea. Especially on a windy day, seeing the stormy sea below you can make this walk very challenging. In return, you will be rewarded with beautiful views of the coastline and the one tiny hut on the island.

These days, most tourists know about the beauty of this area. If you’re travelling on a tour, you’ll be fine. But if you’re on your own, I recommend that you book your ticket online in advance, to make sure you won’t miss out.

1-2h, depending on the length of the queue 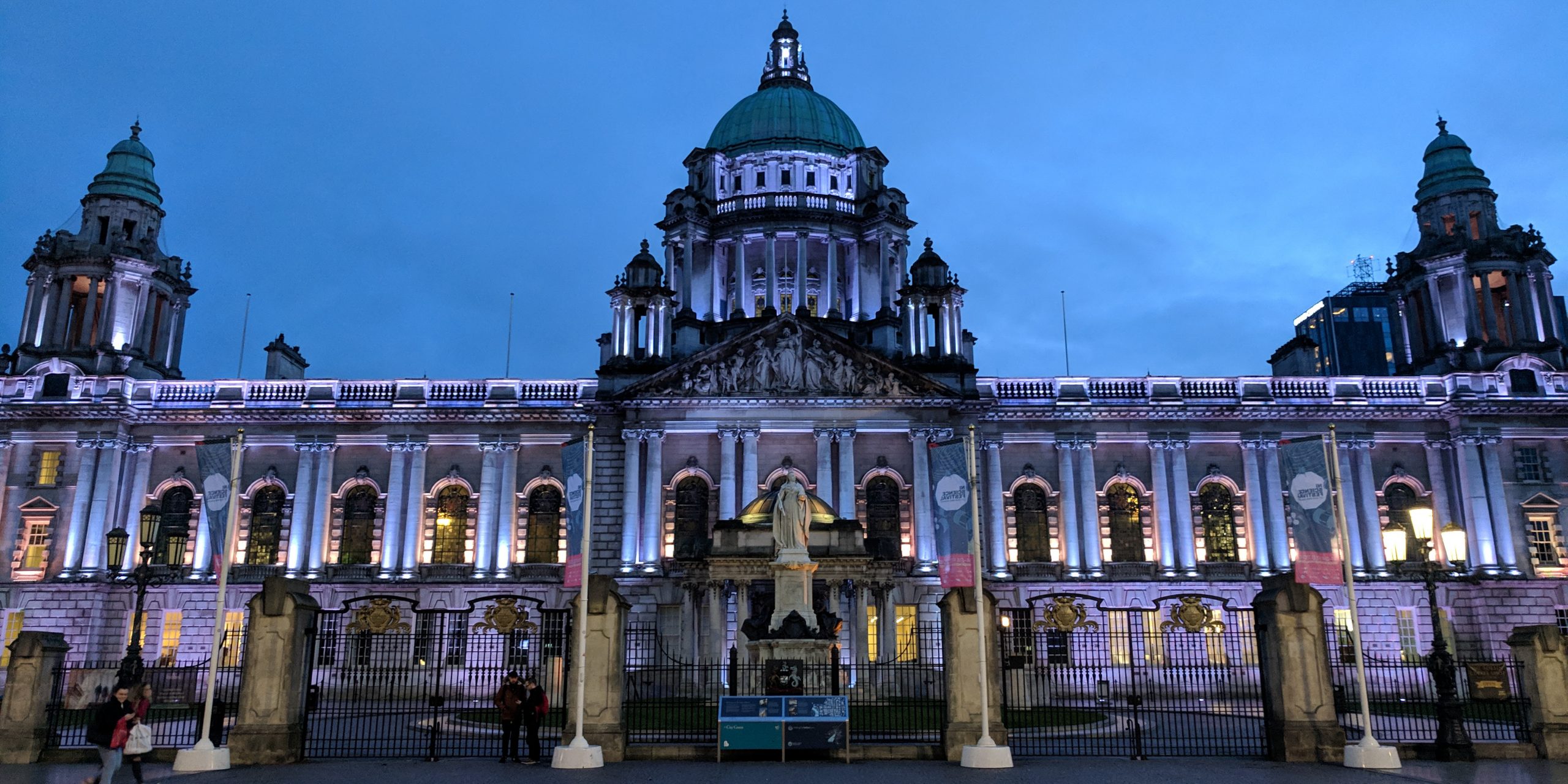 If you’re visiting Northern Ireland on a day trip from Dublin, you won’t have much time in Belfast. We stopped here on our way back, but you could also take a break in Belfast on your way to the next stop. Or, as it’s a long drive, you could break up the trip by stopping here twice.

With the limited time you have, the best thing to do is walk around the city and find either a cafe or a pub to sit down for a while. One of the places to see while going for a walk is The Europa – Europe’s most bombed hotel. Can you believe that it got attacked by bombs 28 times during the troubles?

Talking about the troubles. Belfast is a great place to learn about Northern Ireland’s past. Throughout the city, you can see peace walls, built between Protestant and Catholic neighbourhoods. You can also find political murals in the city. The best way of seeing them is with a guide who has lived through the troubles and who can tell you more about the history.

2-3h, the longer the better

#4 Walk underneath the Dark Hedges 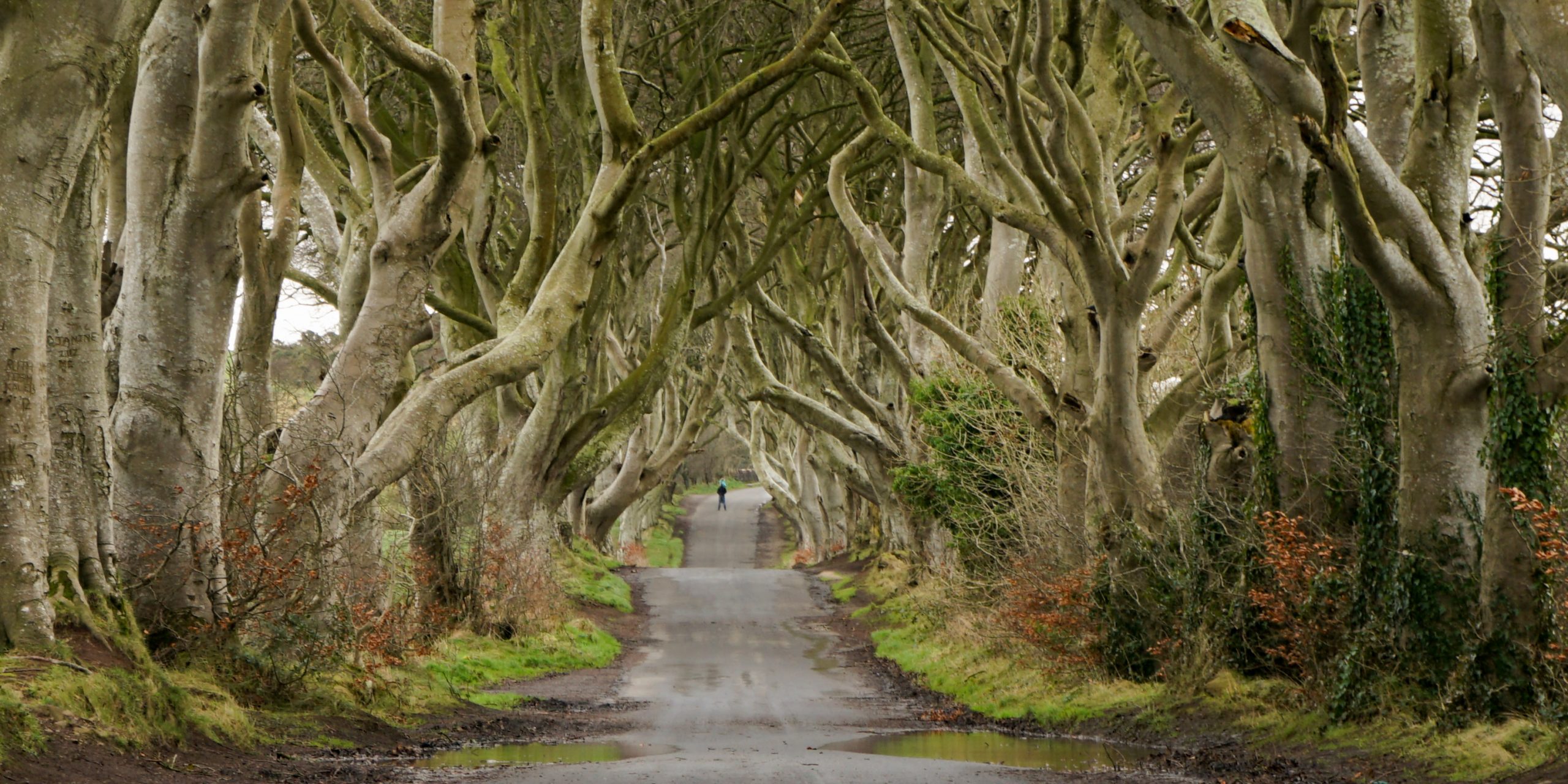 Ever since my friend sent me a postcard from Northern Ireland, I’ve wanted to see the Dark Hedges. I remember that postcard very clearly, with the road disappearing in a tunnel of trees. These days, most people know the Dark Hedges from Game of Thrones, but whether or not you like that show doesn’t really matter. The trees are a cool sight and you should come here anyway.

A guy named James Stewart created that road when he wanted to build an imposing entrance to his manor in 1775. He planted more than 150 beech trees and even though some of them have died since then, it’s a sight you shouldn’t miss. My advice is for you to leave Dublin early in the morning so you can come here before all the tour buses arrive. But be fast, or you will have to deal with huge crowds who all want to see the Dark Hedges. 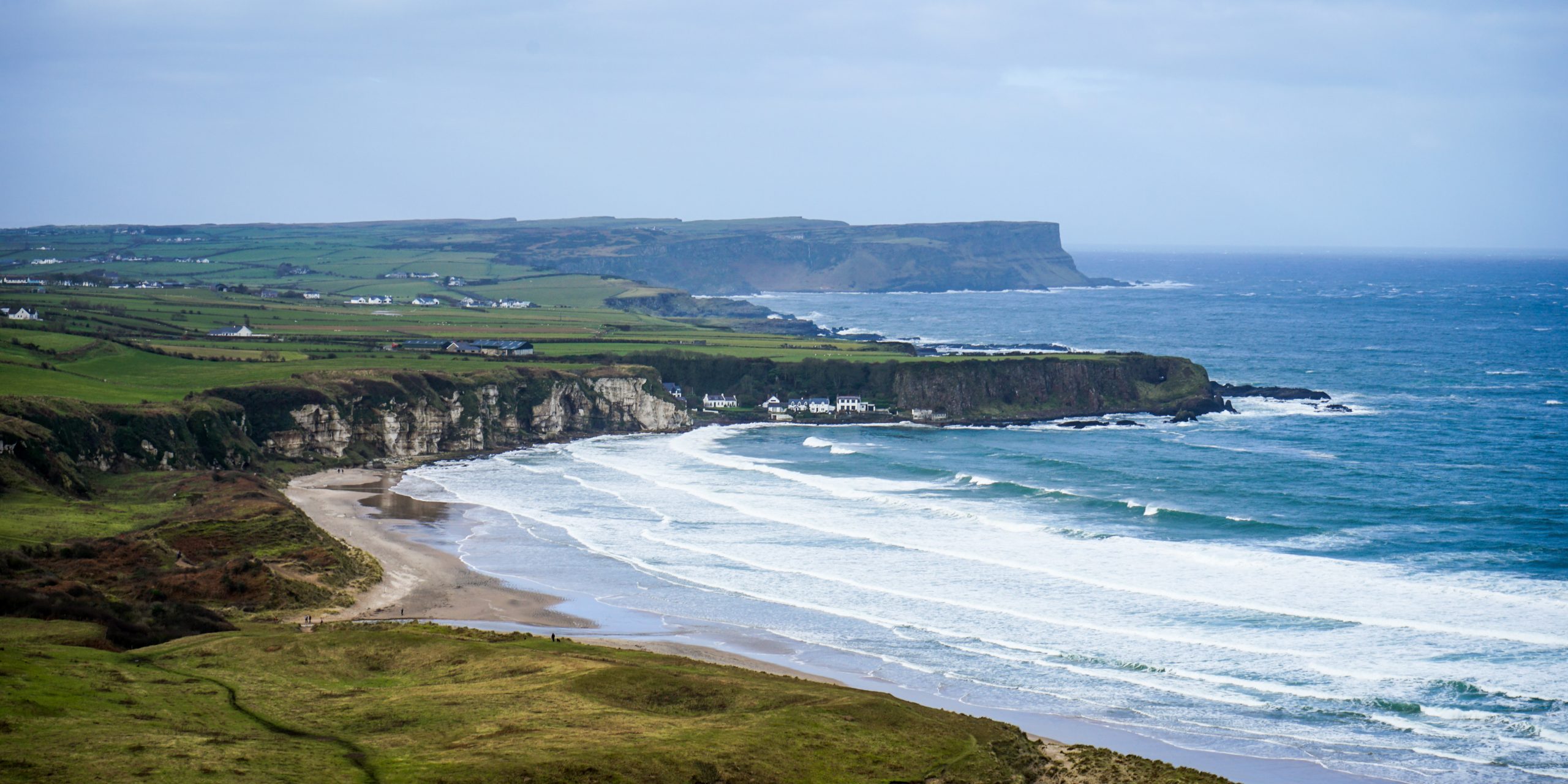 I love the coast and I love beaches, no matter whether it’s in a warm or cold climate. Northern Ireland is home to a spectacular coastline with many beautiful cliffs and beaches. We briefly stopped at White Park Bay and I would have loved to have more time to go for a long walk on the sand. The weather was windy enough that we would even have been able to fly a kite. When I was a child, my parents would take me to the stormy Dutch coast in autumn and I always loved flying kites there.

But even without kites, Northern Ireland’s beaches are stunning. Dress up in warm clothes and then go for a walk. Breath in the salty breeze and relax as you explore the coastline. 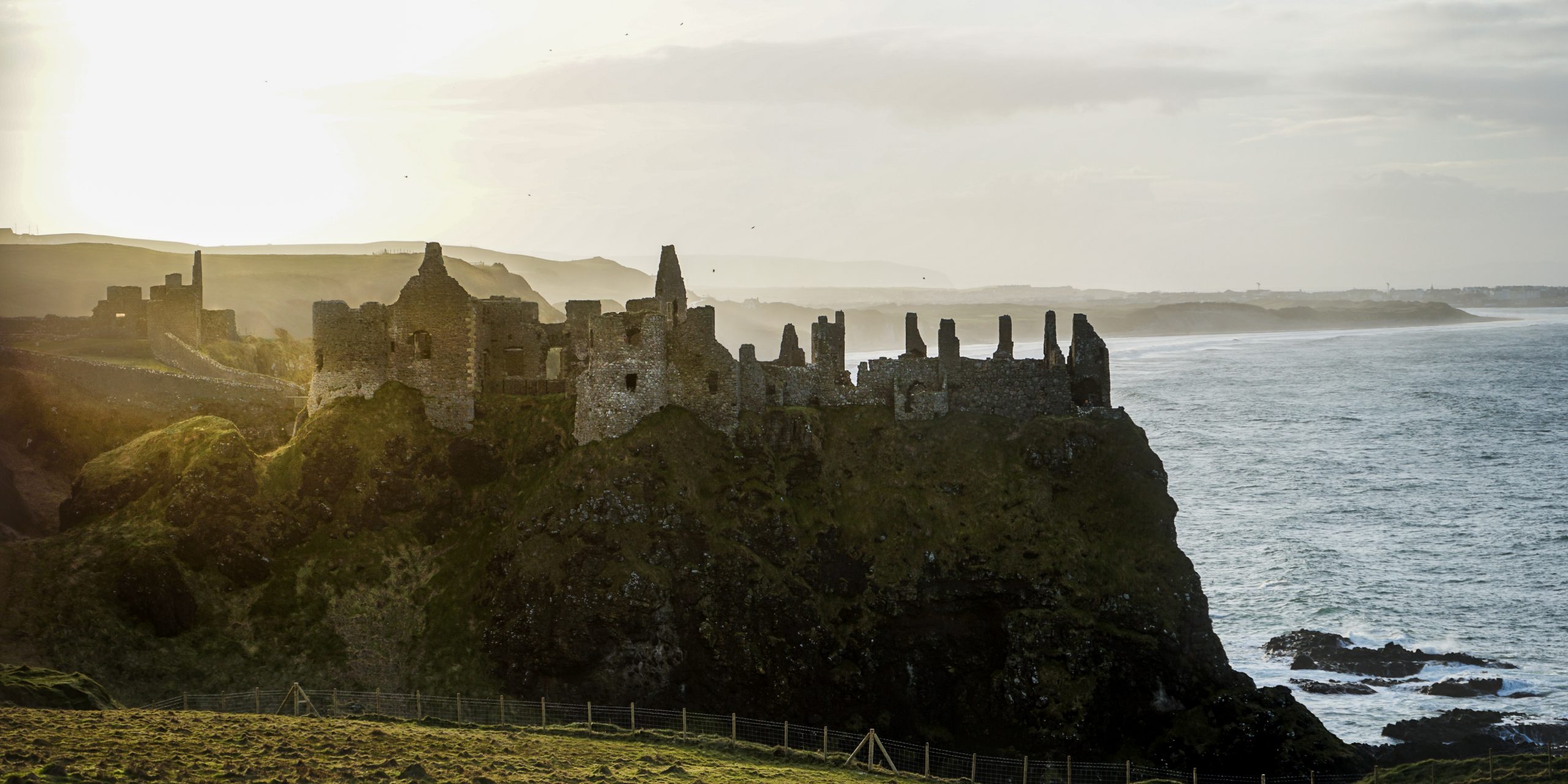 Did you know that Dunluce Castle is more than 500 years old? It was built by the MacQuillan family around 1500 and then conquered 50 years later by the MacDonnell clan. These days, the castle stands crumbling on one of the cliffs next to the sea. If you manage to come here early enough, you can go inside and visit.

Daniel and I were a bit too late, so all we could do was go to a nice viewpoint and take pictures of Dunluce castle. That’s the problem with trying to see Northern Ireland in one day – there are way too many places that you will need to squeeze in a very short timeframe.

Nevertheless, a day in Northern Ireland is better than not going there at all. If you have enough time, you could easily spread the above things to two days and stop in a few small places along the way. Also, make sure to read our blog post on the best things to do in Dublin, to be fully prepared for your trip. And leave us a comment to let us know which place you loved most in Northern Ireland!

By the way, we participated in a collaboration with other bloggers on the top places and attractions to visit in the UK, so you should check it out if you’re looking for more inspiration. 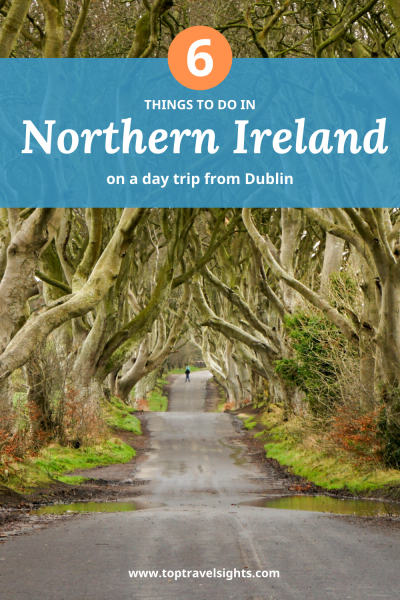