I will be honest with you. I didn’t love Caye Caulker. I’m not saying that I disliked it but it wasn’t my favourite place in Belize either.

I think it all comes down to travelling to Caye Caulker with the right expectations – and my expectations were high. My whole trip to Central America had been inspired by a young adult novel called Wanderlove. I have read that book more often than any other book (even more often than Harry Potter), and a huge part of it takes place on a Caribbean island in Belize. While the island in the book is fictional, it was inspired by Caye Caulker.

So you can imagine my expectations when I got there. I had vivid images of tropical beaches and colourful houses in my head, the kind of place where you cycle through backstreets without seeing any other tourists.

Of course, I had to be disappointed. Yes, you can find colourful houses on Caye Caulker. And yes, if you look for long enough, you will end up in a backstreet without other tourists around.

But what you will not find on Caye Caulker are the country’s most beautiful beaches. You will not arrive in a remote village that has barely had any contacts with tourism.

Instead, you find a lively island with lots of fun (and sometimes expensive) activities where you can meet up with other travellers and go out for a night of partying. If that’s what you’re after, then you’re going to love Caye Caulker. As I said, it’s all about coming with the right expectations.

Now that I’ve cleared up what to expect, let me present to you my favourite five things to do on the island. 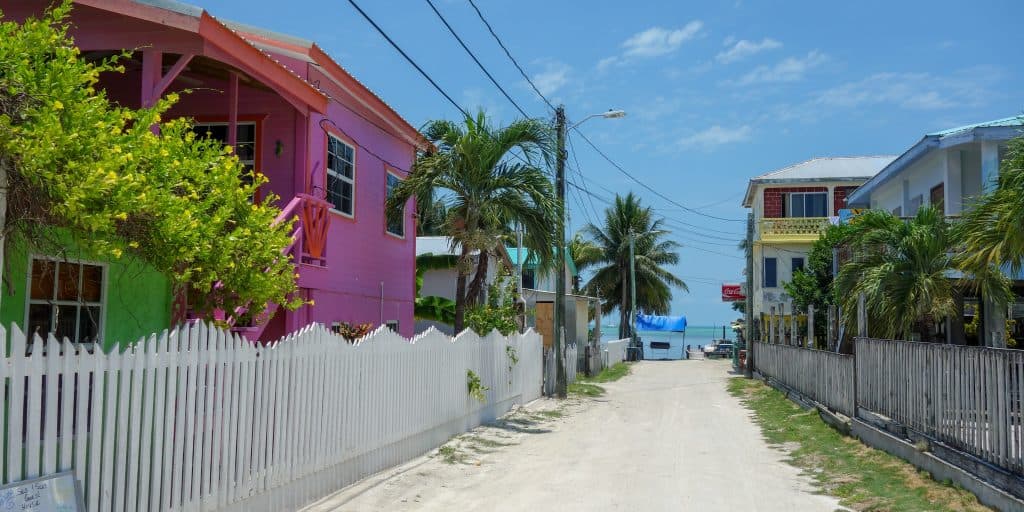 I already mentioned Caye Caulker’s colourful houses and I will mention them again. If it hadn’t been so incredibly hot during noon, I could have spent the whole day walking around the village.

It’s fun to wander through the streets and look for photo opportunities. I ended up taking far more pictures than I should have because every street corner was pretty.

And not just that. It’s not all about the houses but about the locals as well. Nowhere else have I found a population as open and friendly despite the high number of tourists. Smile and laugh with them, and don’t be shy if you want to take people’s pictures. I’ve asked a few locals and not a single of them turned me down.

When going for a walk, if you’re looking to get off the beaten track (as far as this is possible on this island), go south towards the airport. Here, you might find some quiet backstreets which have not been overrun with foreigners yet.

#2 Go on a sunset cruise 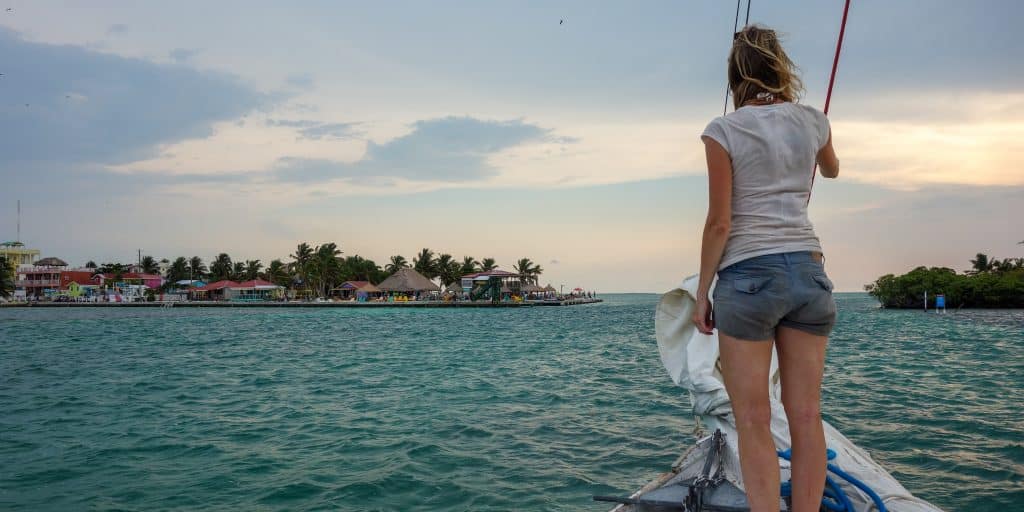 I only did one tour on Caye Caulker and it was a sunset cruise. It wasn’t cheap but it was totally worth it. We booked with Raggamuffin and went out in a sailboat in the evening. The day had been sunny but by the time we were supposed to leave, heavy clouds rolled in. Since we had already paid for the cruise and didn’t have anything else to do, we packed a rain poncho and figured we’d at least give it a try. Sometimes you get lucky sometimes you don’t.

We got lucky. After cruising past The Split, our captain turned off the engine and set sail. And just at the right moment, the clouds cleared up and we leaned back as the sun turned the sky all shades of red and orange. It was beautiful!

We surrounded the Southern part of the island and returned when it was already dark. Our tour included a rum punch, but we asked for a non-alcoholic version when we booked and they provided juice for us. We also got as much tortilla chips with sauce as we could eat.

If you have an evening and don’t know what to do, I highly recommend you book this sunset cruise. It’s very beautiful and relaxing. You have to turn up at Raggamuffin before three in the afternoon, so you can do it pretty spontaneously. 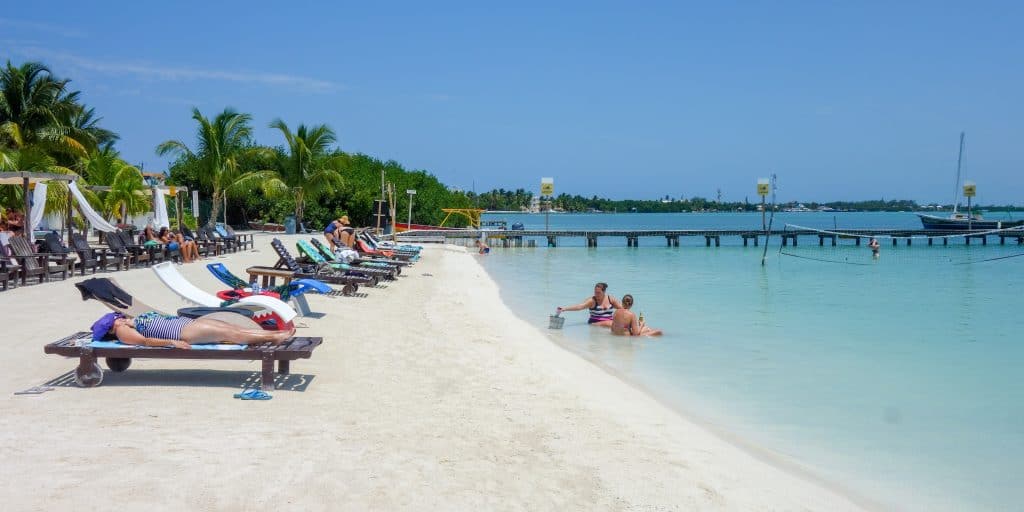 As I already mentioned, Caye Caulker is missing those tropical beaches you know from other Caribbean destinations. The closest to a beach you can find is the man-made one at Koko King.

Koko King is a resort located on the Northern side of the island, that was split off by a hurricane. There’s a shuttle boat going there that leaves at least every hour or half an hour. The service is free as long as you buy food and drink (be aware that there is a minimum spending requirement of 25$ per person). If you decide to rent shade, that also counts towards your spendings.

I have found shade very hard to come by on Caye Caulker. While I don’t mind the sun, I do mind sunburns so we decided to rent a space with shade, two beach lounges, a table, more chairs and a hammock. The hammock was, unfortunately, set up in such a way that it was always in the sun but the chairs were fine. We spent almost the whole day there, relaxing, drinking smoothies and cooling down in the sea.

The resort at Koko King does not just include a beach, they have also set up a trampoline in the water. I tried it once and more stumbled than jumped into the water but it was lots of fun. They also provided tubes for those who preferred to float on the sea instead of returning to the shade. With a cold drink in hand, that’s a good way to spend an afternoon.

While the drinks are somewhat reasonably priced, I haven’t heard anything good about the food. It wasn’t extremely expensive, compared to other places on the island, but everyone I talked to said that the quality wasn’t very good.

#4 Hang out at the Split 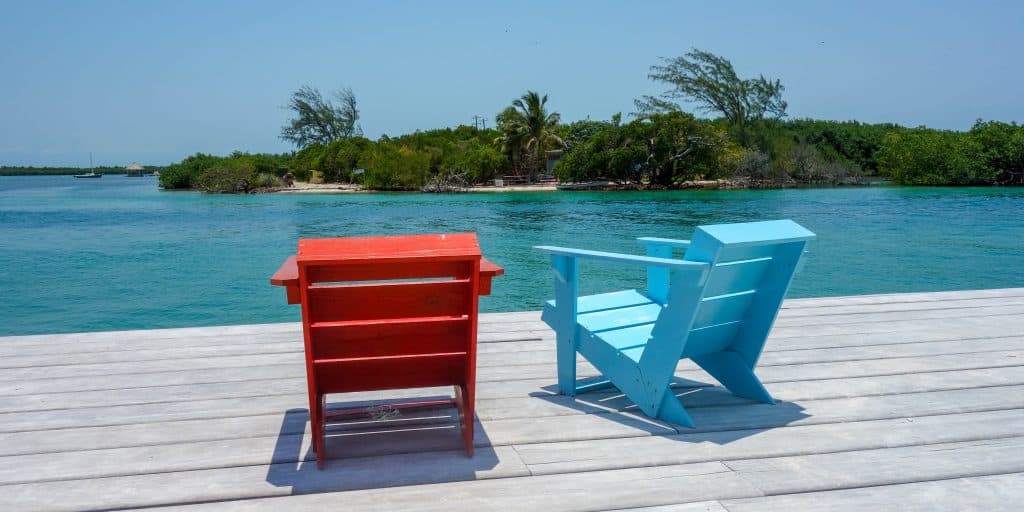 The most popular place on Caye Caulker is without a doubt the Split. This is where the island got separated into two parts. While it doesn’t have a beach, it’s as close to one as it gets without having to go to Koko King. The Lazy Lizard, a bar located there, provides beach chairs and also benches with shade. They aren’t very comfortable but they work well enough if you need a break from the sun. As I said, shade isn’t easy to come by on this island so make sure to pack plenty of sunscreen.

If you go into the water, you will find umbrellas and tables there. You can try to swim around and hopefully see some fish in the clear waters or you could climb up to the top of the jumping platform and jump into the sea. Don’t be scared. The water is surprisingly deep in the channel between the two islands.

Caye Caulker is THE place to go snorkelling.

When I came here, I was travelling with a friend who didn’t snorkel. It seemed unfair to leave her alone and go on a full-day snorkelling trip when there were also lots of activities we could enjoy together. But while I didn’t do any underwater activities myself, I have met lots of people who did.

Every single one of them loved it. I did not talk to anyone who disliked it or even just thought it was mediocre. For most, it was the highlight of their trip to Belize so I want to recommend to you to give this a try.

People found sea turtles, sharks, manta rays and even manatees in the waters surrounding Caye Caulker, not to mention all those colourful fish that live in the reef. Options range from half-day to full-day trips that include up to four snorkelling spots and lunch.

If you have a diving certification, you could even go further and dive the Blue Hole. You will need your advanced underwater license to do so, but it’s a very cool way to see Belize’s most famous sight.

I hope you have gotten an overview of what to do on Caye Caulker. As I said, it all depends on arriving with the right expectations. And if you expect to relax for a few days, meet fellow travellers and see the underwater world, you have come to the right place.

Belize is the most expensive country in Central America and Caye Caulker is even more expensive than the mainland. But fortunately, that doesn’t mean you have to spend a fortune. Don’t buy your food in any of those overpriced tourist bars. Instead, go to Chef Juan. His food is delicious (I can highly recommend the curry or the pulled pork burger) and affordable.

Or you could try one of the barbeques on the beach. I never went there since I always missed their opening hours, but the food looked so incredibly good. And it’s a pretty cool waterfront setting. If you have been to one of them, I would love to hear how you liked it.

And even if you haven’t, I would love to hear from you. Have you ever been to Caye Caulker? What did you do and what did you like? Are you planning on going? And have you ever had ridiculously high expectations about a place and then got disappointed?

If you’re looking for pretty Caribbean beaches, by the way, I can highly recommend Utila in Honduras. Just make sure to stop in Guatemala on your way. Or go northwards to Mexico, where you can also find amazing beaches all along the Yucatan peninsula.

If you’re looking for more resources about Belize, you’re in luck. We have a few other posts that you’ll find very helpful for planning your trip. 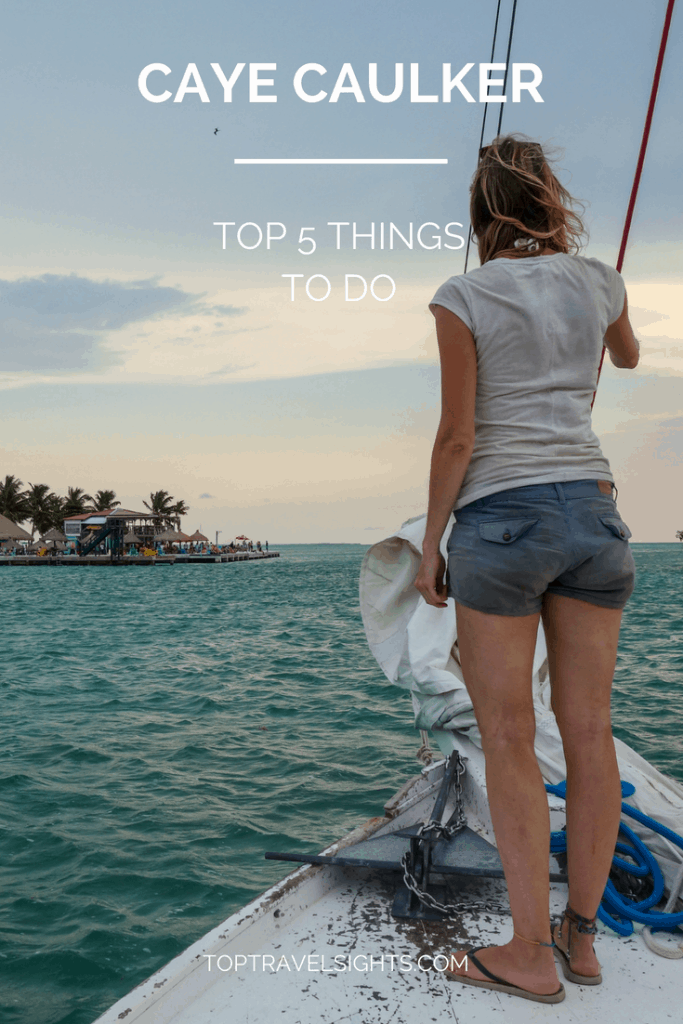