If you visit Ecuador, you will likely pass through Guayaquil. All flights to Galapagos leave from the Guayaquil airport. And if you arrive from Peru, it is a convenient stop to break up what would otherwise be an endless bus ride.

So if you have to come here anyway, why not turn this into a sightseeing stop?

With its colonial buildings, the Malecon, the hillside neighbourhoods and a mangrove island just off its coast, Ecuador’s biggest city is a great place for tourists. There are plenty of things to do in Guayaquil. If you are wondering what you shouldn’t miss, here are five of Guayaquil’s highlights:

Our favourite things to do in Guayaquil 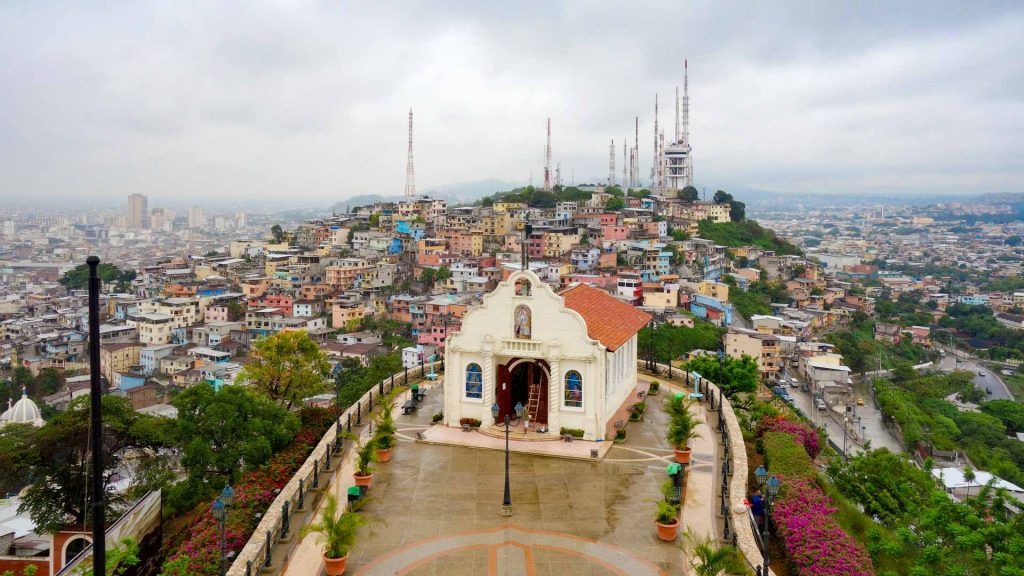 Located on top of a hill, the neighbourhood of Santa Ana is the one place you should not miss in Guayaquil. If you have limited time, make sure to at least come here.

Santa Ana received its name from a Spanish treasure hunter who climbed the hill and planted a cross on top of it. He dedicated that cross to Santa Ana, the maternal grandmother of Jesus.

Up here, you will find colourful houses, cafes, the remains of a fort from the 17th century and a lighthouse. It is entirely free to climb to the top of the lighthouse, so make sure to go up and enjoy the view.

I hope the weather is better for you than it was for me. But even on a rainy day, you get a stunning view over the river, downtown and the neighbouring hill with its colourful houses.

You will also find a reconstructed pirate ship up here which houses a bar. It wasn’t open when I came here, but if you go in there, let me know how you like it. One thing is for sure, it’s one of the most scenic bars I’ve seen in that city.

After climbing back down, you could check out the area of Santa Ana’s old port. Here, you can find three museums as well as a couple of cafes and restaurants. Depending on your budget (the restaurants here are slightly more expensive than in many other parts of town), this is a great place to go out in the evening.

Do you want to try some typical Ecuadorian food? Then check out our guide to the tastiest dishes you shouldn’t miss. 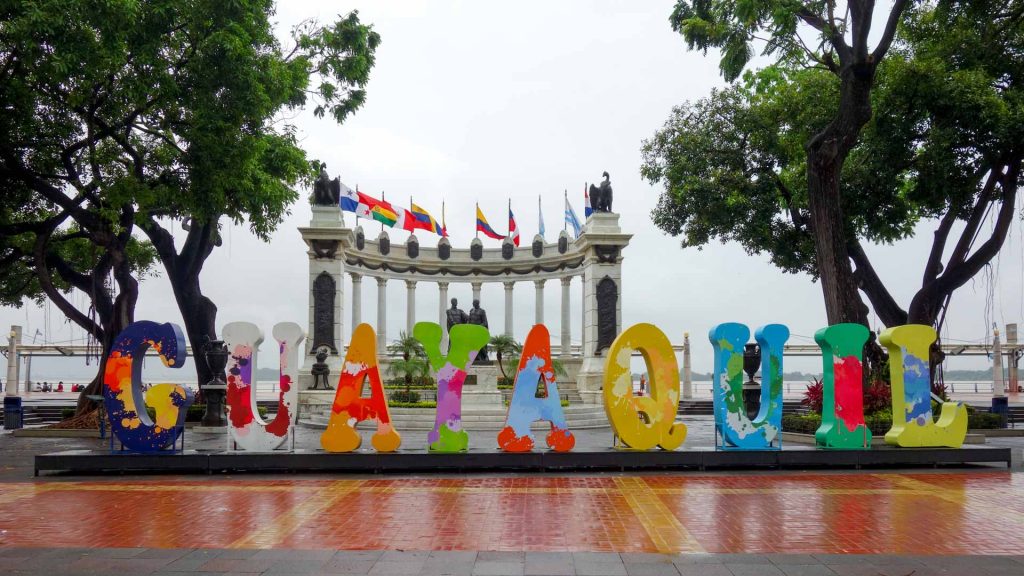 The Malecón 2000 is one of Guayaquil’s most frequently visited places. It is a pedestrian walkway along the Guayas River with a length of around 2,5km. It is here that you can find the Guayaquil sign from the photo above and it is also here that you can find lots of shops, a cinema (the first IMAX cinema of its kind in South America), a Ferris wheel and boats leaving for river tours.

The Malecón 2000 was already a popular meeting place around a hundred years ago. Locals would stroll through this park until it eventually fell into disrepair. Over the years, it became known as an unsafe place, where prostitutes and drug dealers met.

Fortunately, a restoration project brought it back to life (and reconstructed the parts that had by then fallen into the river). These days, it is perfectly safe to walk along here and enjoy the view. You can also find lots of cafes and restaurants along the Malecon, in case you need a break from sightseeing.

In the middle of the walkway, you’ll find La Rotonda. This monument shows Simón Bolívar and José de San Martín, South America’s two greatest independence fighters. They met up in Guayaquil in 1822, to plan the liberation of the continent. If you travel more around South America, you’ll hear their names over and over again, so make sure to stop here and take a look. 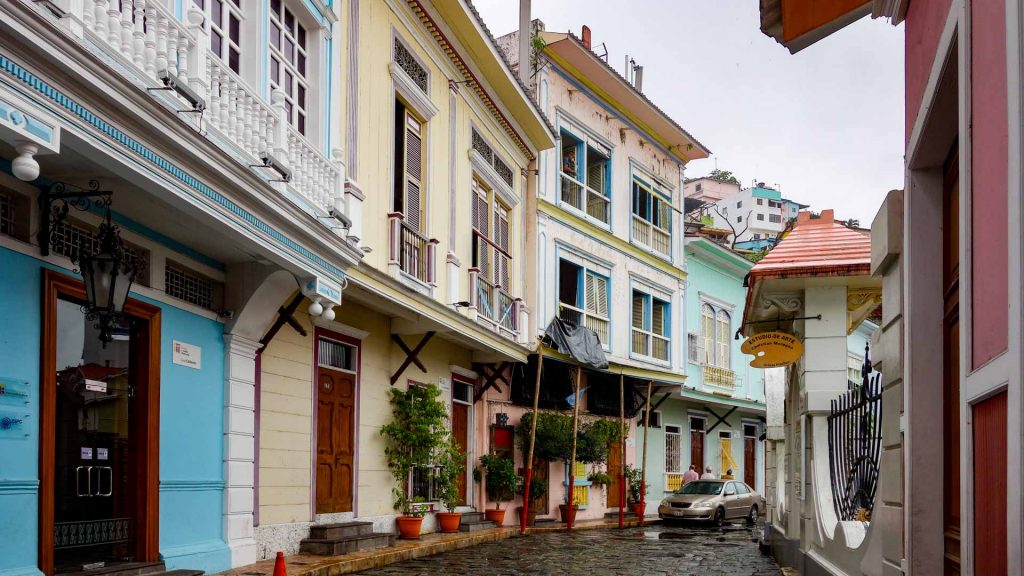 I am usually not a fan of recommendations that include art galleries, and I never thought I would make one myself. But the art galleries in Las Peñas are well worth a visit if only for the beautiful buildings they are located in.

This neighbourhood, located just below Santa Ana, is the city’s oldest, so this is where Guayaquil started. Until 1650, the town only had two streets. One of them was the Malecon, and the other one was the street going through Las Peñas. It was only in the second half of the 17th century that the mayor constructed three more roads and the city started growing.

These days in Las Peñas, you can find old restored houses housing cafes and those art galleries I mentioned. The gallery we went to did not just have nice paintings. It also had wide-open windows with a great view of the river. We even discovered giant iguanas on a nearby tree when looking out of those windows.

#4 Walk amongst mangroves on Santay Island 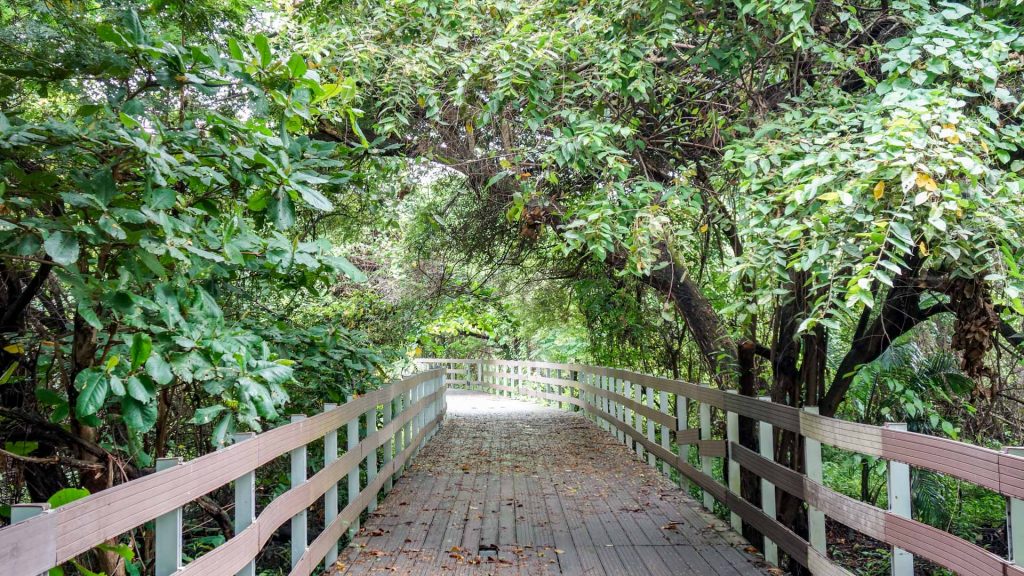 If you want to escape the city for a while, go to Santay Island. This island is home to mangroves, a variety of birds, thousands of crabs that try to scuttle away from you during low tide and even some crocodiles.

In theory, you could also spot boas, racoons, anteaters and other mammals. While we neither found crocodiles nor anteaters, we had a good time walking over the boardwalks, taking pictures of the mangrove forest and watching bright blue butterflies.

On the island, you can also find a small village, with houses on stilts and a small museum where you can learn more about the island.

As an alternative, you can take a boat or go to the bridge at the northern tip of the island. Negotiate hard when asking for a taxi driver to take you there and don’t worry about your way back. Taxis pass by often, so you will have no trouble finding one over there.

Also, don’t come too late in the afternoon. The island is way larger than it appears. Make sure you have good walking shoes so you can explore as much as possible. The boardwalks are even, but walking for several hours in horrible shoes gets uncomfortable quickly.

And last, put on mosquito repellent. All that water around Isla Santay is a perfect breeding ground for insects. 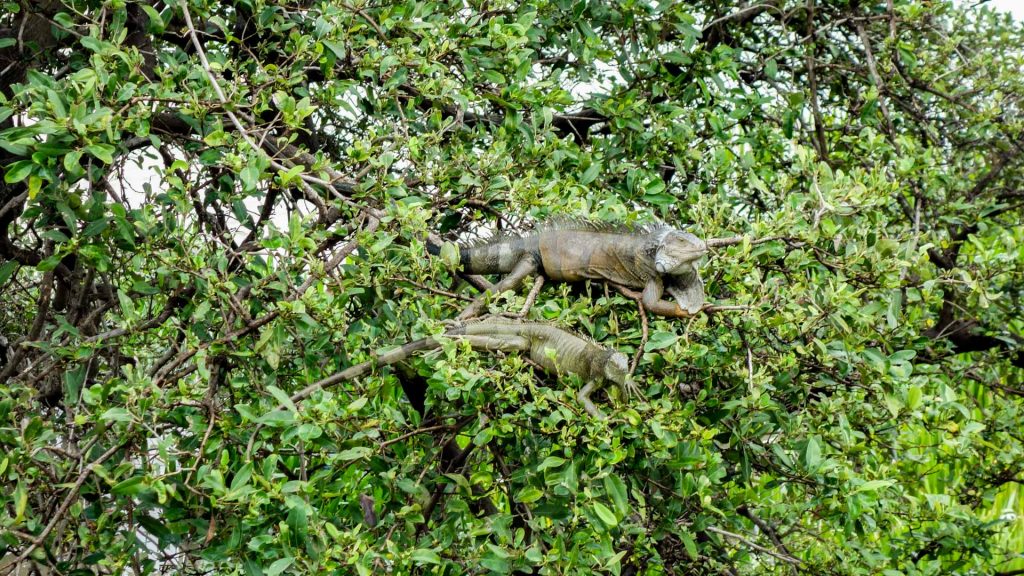 Guayaquil is known for its large iguanas, which can reach up to 1 meter in length. A good place to spot them is the Parque de las Iguanas (also known as the Parque Seminario) in the city centre. Unfortunately, when we came by, it was raining heavily and instead of iguanas, we only fund a group of tourists hiding under umbrellas.

Do you want to see more iguanas? Isabela Island in Galapagos is the perfect place for spotting them.

We got a chance to see the iguanas later when visiting the art galleries in Las Peñas. From one of the windows there, we saw a tree with at least ten iguanas sitting on its branches. There were probably way more, at least two or three times as many as we saw, hiding in between the trees. These animals are masters of camouflage and can be very hard to spot.

Just make sure to keep your eyes open while walking through Guayaquil!

depends on your animal-spotting skills

How to get to Guayaquil

You can get to Guayaquil either by bus or by plane. You’ll find flights from many cities in North and South America, and as we already mentioned above, you’ll have to go through Guayaquil if you want to fly onwards to Galapagos.

If you’re coming from Peru, you can take a bus from either Tumbes or Mancora.

For going onwards in Ecuador, take a bus to Cuenca. They leave every hour, and the journey takes four hours. You can also find frequent connections to Quito. The trip up here takes around eight hours.

Or do you want to explore more of Ecuador’s coast? Then catch a bus to Montañita where you can enjoy the beach.

How to get around Guayaquil

If you stay downtown, you can walk to most points of interest. You can also catch a taxi if you get tired. Make sure to only get into the official taxis or, better yet, call an Uber.

We used public transport to get to the Calle El Oro, the street where you can find the bridge to Santay Island. The Metrovia is a system of rapid bus lines that will allow you to get around the city for much less money than a taxi. 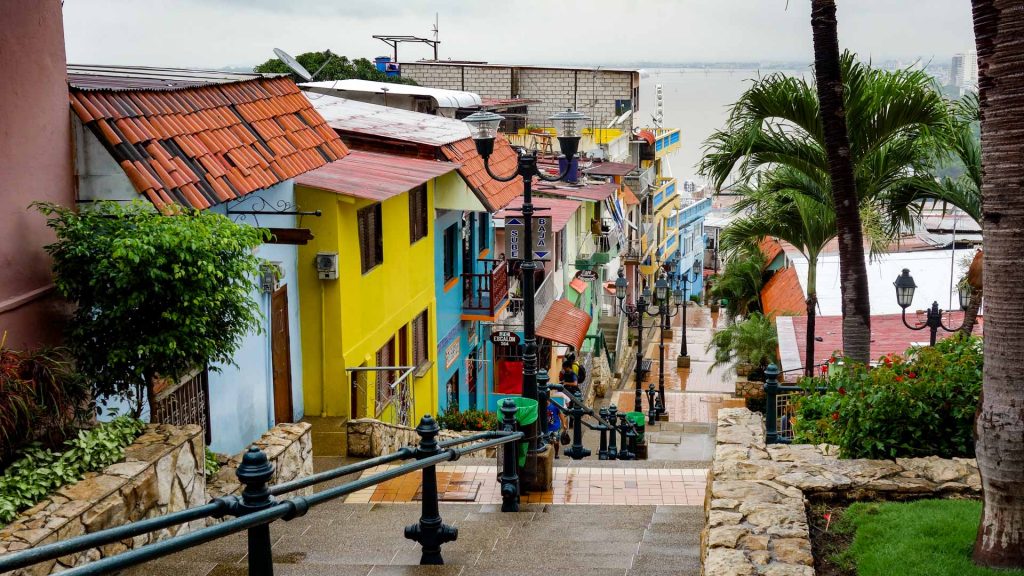 See those cloudy and rainy photos above? That’s the weather you can expect if you visit between January and April. Those are the rainy months.

We still had a fantastic time in Guayaquil, despite needing raincoats when we went out. Plus, we even had a few hours of sunshine.

But if you expect good weather, then you’re better off visiting between May and December.

Is Guayaquil safe to visit?

I have to admit, I was a bit worried before coming to Guayaquil. It has a reputation of not being a very safe place. Then again, many places in South America do, and during months of trouble, I never ran into any trouble.

As a rule of thumb, you’ll be safe as long as you stick to the touristy areas. During the day, you’ll see lots of families with kids out here, so you won’t have any problems.

Nevertheless, it is good to take a few precautions. Don’t take too many valuables with you and leave any fancy jewellery in your hotel safe (or at home – South America, in general, is not a good place to carry around lots of expensive jewels). Keep your cash close and always pay attention to your bags. Like in many big cities around the world, you might come across pickpockets.

While walking around, always take a close look at your surroundings. As I said, we never ran into any problems and felt perfectly safe. But if you stray into some of the not-so-nice neighbourhoods, you might get into trouble. Therefore, it’s best to avoid them.

Also, be careful at night. If in doubt, ask your hotel or restaurant to call you a taxi.

If you keep the above things in mind, then you shouldn’t have any problems at all during your stay in Guayaquil.

Have you ever been to Guayaquil? Or are you planning on going? We would love to hear what you did and what you enjoyed. Also, we have lots of information about Ecuador that you’ll find useful for planning your trip.

From Guayaquil, it is very easy to hop on a plane and fly to Galapagos, so check out our comprehensive articles about the archipelago:

If you prefer to stay on dry land, we also have lots of articles for you. 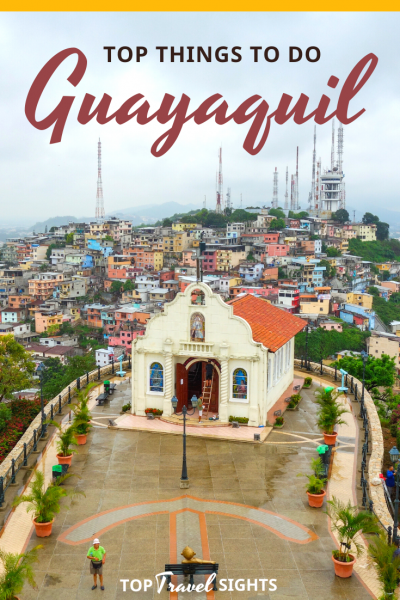 What to Pack for Peru – Your Complete Peru Packing List

Pin It
We use cookies to ensure that we give you the best experience on our website. If you continue to use this site we will assume that you are happy with it Privacy policyOkNoPrivacy policy