When I reached Cartagena after almost half a year of travelling through South America, I was tired of meat, rice and french fries. It didn’t matter where we went on this continent, it seemed as if half of the restaurants would only let you choose which kind of meat you wanted to have with your dry rice and your soggy french fries. And it didn’t matter which one we went for, the meat seemed to taste the same everywhere.

I am not saying that we didn’t have amazing food along the way. I remember that Patagonian lamb, for example. Or the delicious sopa de mani in Bolivia, a soup rich in flavours and spices. But there had also been parts where we hadn’t been able to afford anything other than the cheapest and most tasteless dishes, particularly in expensive regions like Patagonia or Galapagos.

Which is why I was excited about trying Colombian food. I had heard many great things about it, and when we read about a streetfood tour in Cartagena, we instantly signed up for it.

To share my experience with you, I have put together a list of 15 streetfood items you should not miss when travelling to Cartagena. Some of them, I discovered them on the tour. Others, I know of because I walked up to a street vendor and pointed at the delicious-looking food. Which is what I highly recommend doing. Whenever you smell something good, check it out and try it. More often than not, I promise you will love it.

I thought for a long time about what kind of street food I liked best and it was a tie between mango biche and deditos – but mango biche won. It is basically green, unripe mango, that is peeled and cut into strips and topped with lime and salt.

If you have ever eaten a green mango salad in Southeast Asia, you will have a basic idea of what it is like. It does not taste like a ripe, yellow mango at all. Instead, it is a delicious mixture of salty and sour with a hint of fruit. Depending on where you buy it, your vendor might also top it off with pepper or chilli powder, so don’t be surprised if it is slightly spicy.

I just wrote that I had a hard time choosing between mango biche and deditos as my favourite snack. They couldn’t be more different. While mango biche is fruity, salty and sour at the same time, deditos satisfy my cravings for cheese. They almost taste like the cheese bread rolls I sometimes bought at the end of a night shift.

Dedito means little finger but make no mistake. They are anything but little. Instead, when you order a dedito, you get a long roll of dough filled with cheese. Make sure to get it freshly fried so the cheese inside is still liquid.

In Cartagena, you can find three types of arepas. Arepa choclo, arepa con queso and arepa con huevo. They are all made with ground corn, and they all taste differently. As with the mango biche and the deditos, I find it hard to say which ones I liked best. I think my favourite might be the arepa choclo.

Arepa choclo is a yellow arepa made from giant corn. Unlike the other arepas, it tastes slightly sweet and it had a stronger taste of corn flour than the arepas with cheese or egg.

Out of the three arepas I tried in Cartagena, the arepa con queso is another one I really liked. You can find it everywhere, just look for the thick, white arepas being grilled at the side of the street. Arepas con queso are also made from corn flour. The flour is mixed with cheese and it is then grilled from both sides.

The arepa con cheese is so huge and filling that you will only need one. It makes for a great snack to have while walking through the streets of Cartagena. 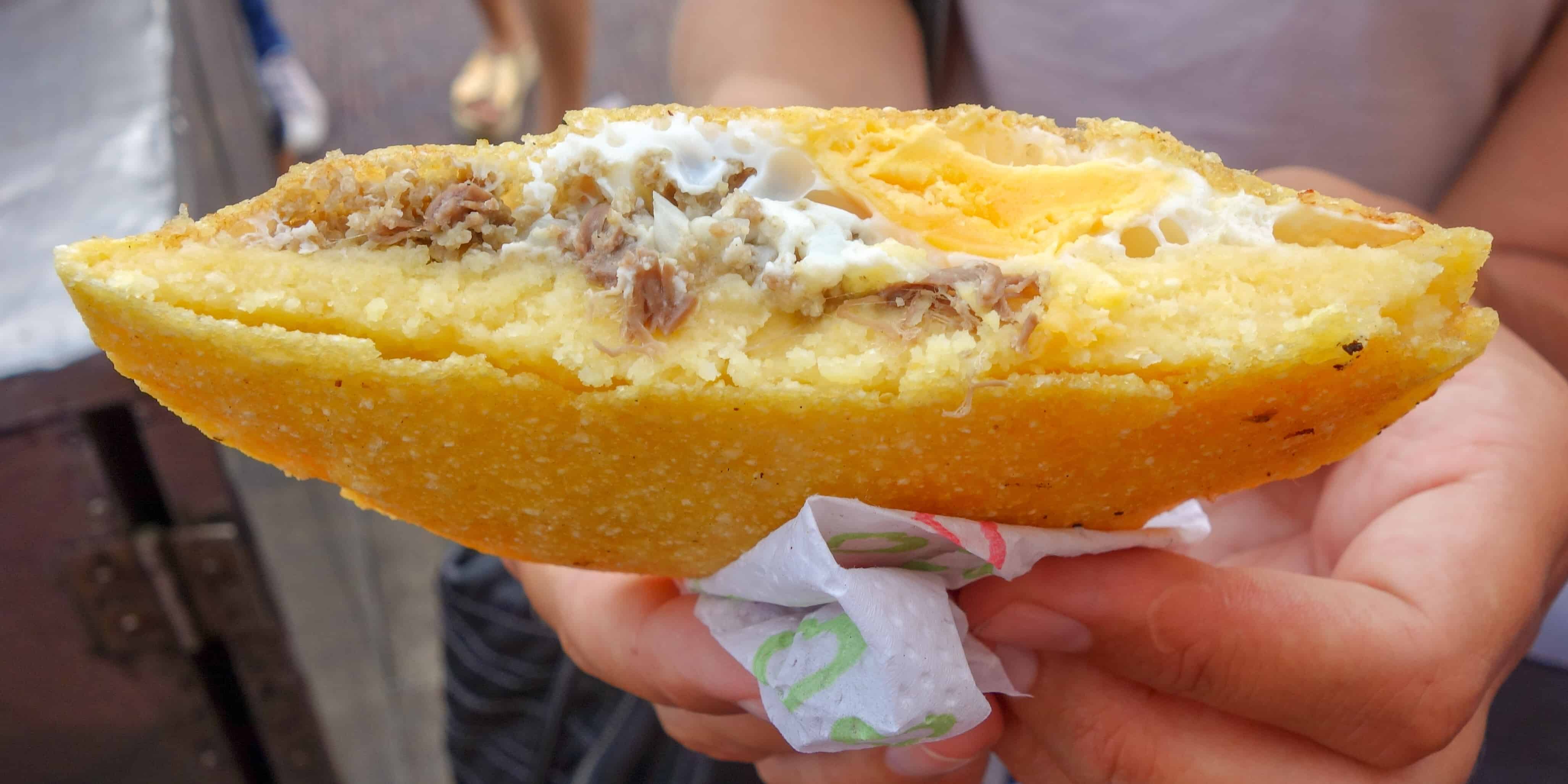 The arepa con huevo is typical for Cartagena and you can find it everywhere. It is an arepa that has been fried. Once taken out of the hot oil, it is then filled with ground beef and egg and thrown back into the frying pan to boil the egg.

I am not a huge fan of eggs. I can enjoy them from time to time, as long as it’s not too often. But since it is not my favourite kind of food, I would rather order one of the two arepas mentioned above than the arepa con huevo. Nevertheless, these egg arepas are delicious and the equivalent of a small meal. 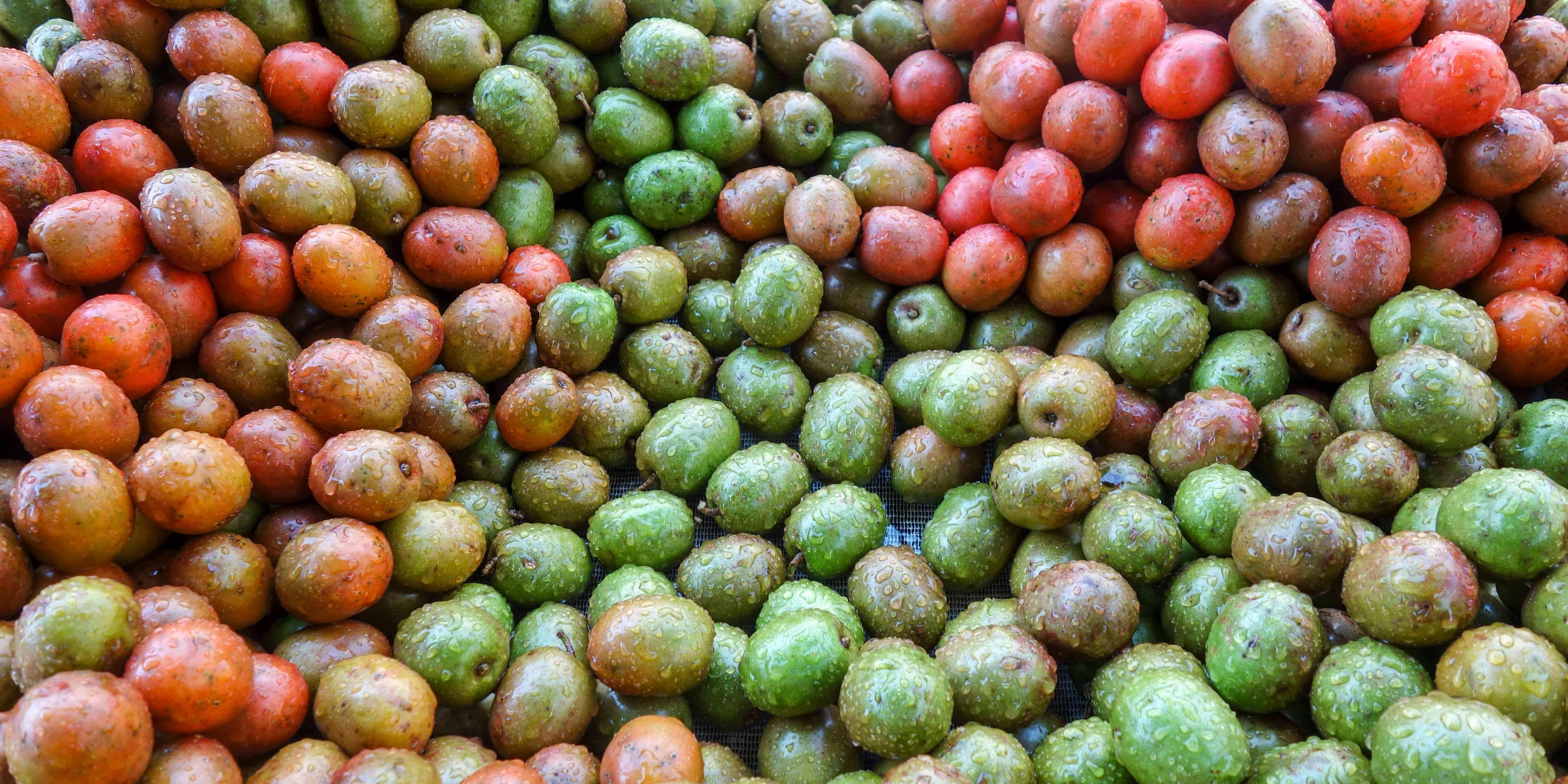 After all those fried arepas, it is time for some more fruit. When we visited Cartagena in March, we saw fruit carts everywhere. Some of them sold lots of different fruits whereas others only had one fruit. It was green, red or a shade in between, round and small enough so I could just pop it completely into my mouth.

We bought a handful. They have a stone inside and it took me a long time to figure out what they reminded me of. Plums. Those ciruelas are small, slightly sour plums. Make sure to try them while you are in Cartagena.

You will need some kind of drink to wash down all of this food. I highly recommend you stop at one of the coconut stalls to buy some coco frio. Tourists will often get the coconut water while it is still inside a coconut. If you prefer your drink cold, ask for the coco frio and have it served chilled in a bag.

Tear a corner of the bag open with your teeth and be careful when drinking it. You don’t want to end up with coco frio all over your clothes. 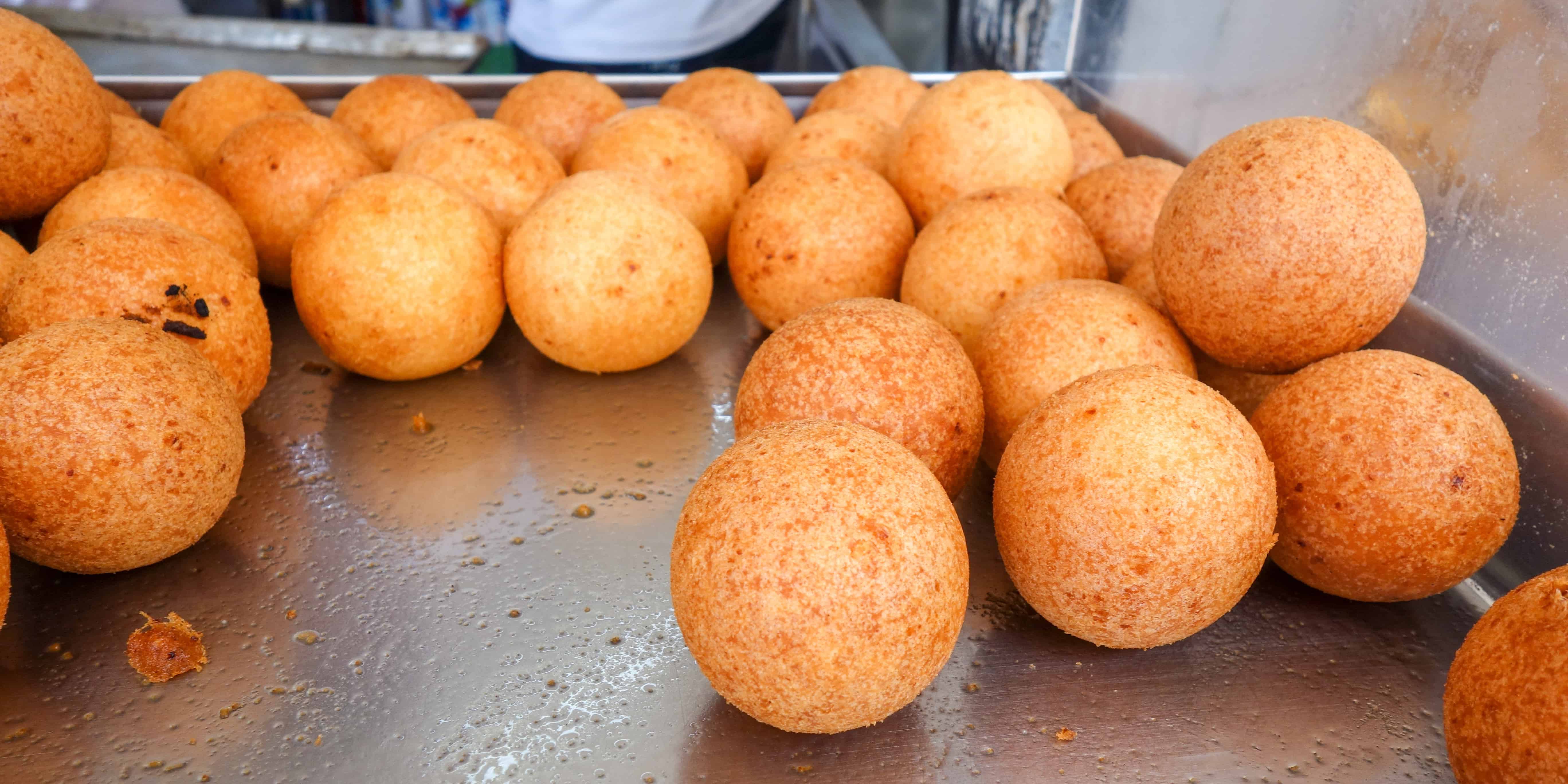 Buñuelos (not to be confused with buñuelos de frijoles) are round, fried balls. They consist of dough with a hint of cheese and are usually eaten for Christmas. On December 7th, friends and family come together to celebrate in honour of the Virgen Mary and that’s when people prepare buñuelos. But since everyone loves them, you can now find them everywhere, no matter the date.

The fried buñuelos are crispy on the outside and very soft on the inside. The dough itself does not have much taste, but you will detect a hint of cheese which makes it so delicious. 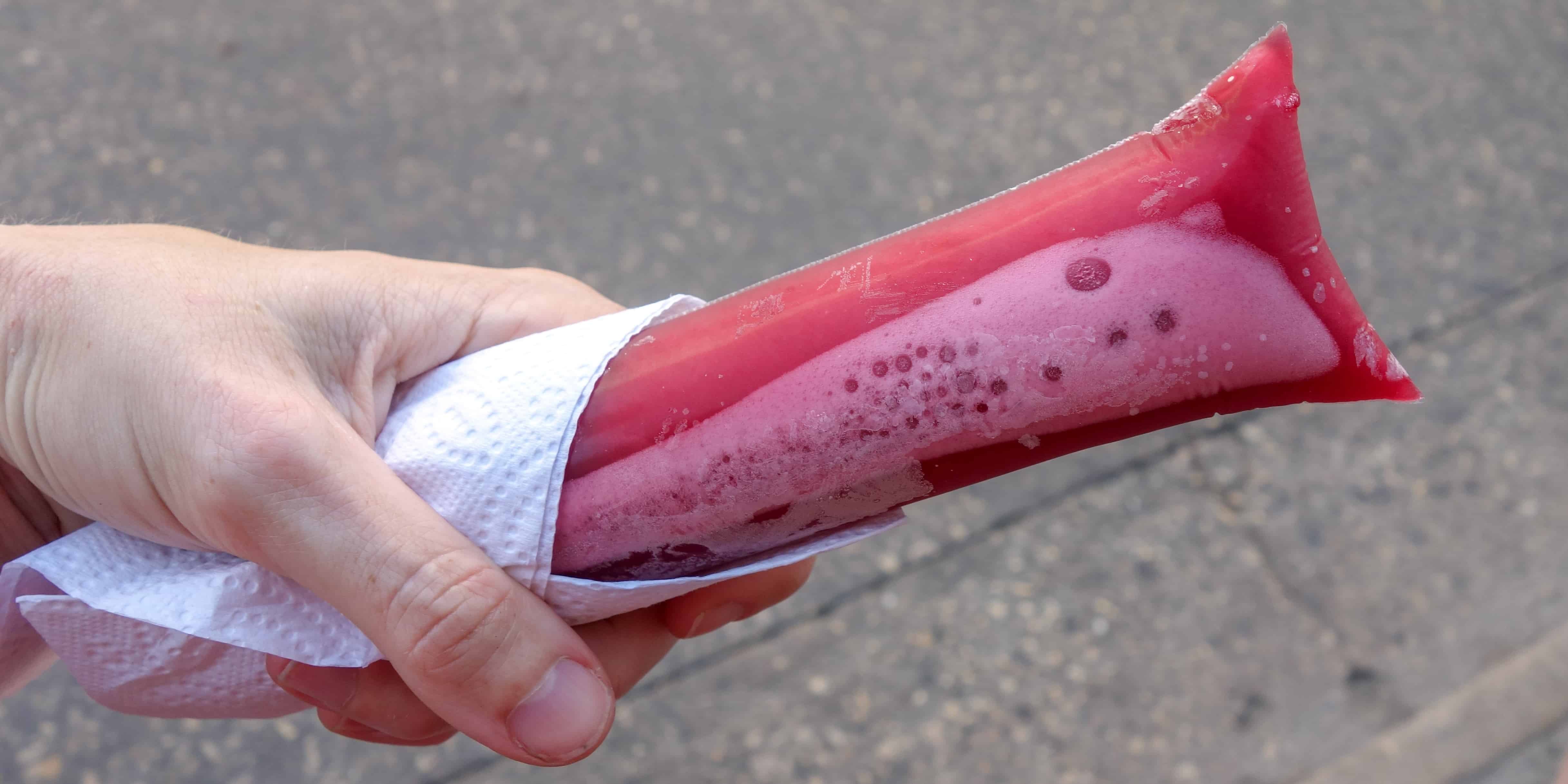 Are you ready for something sweet? Boli are a very popular treat amongst children. They are basically frozen juice. You buy them, tear open one end of the plastic bag they come in, and lick them. When you see a child walking around with one, make sure to ask them where they got it from. We bought ours at a regular house where I never would have asked for boli.

Just like juice, boli come in many different flavours. If you want to try something new, go for corozo. It is a red fruit that is boiled with sugar and water and ends up tasting like cherries. 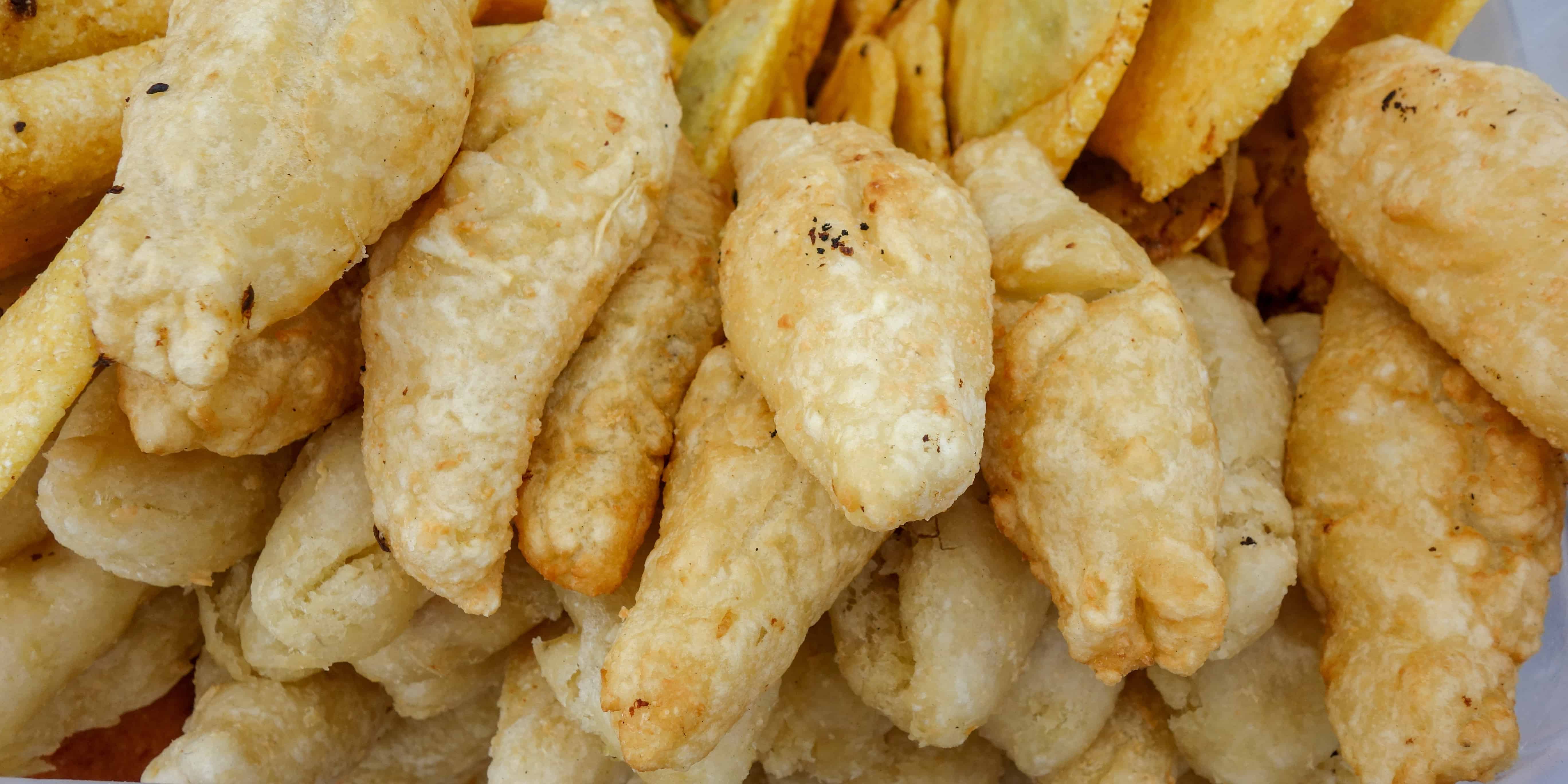 We are back to fried food. Carimañolas are prepared with either yuca or manioca dough. They come in various variations, filled with cheese or chicken, and are, of course, fried.

I absolutely loved the cheese one. My carimañola was fresh and the cheese was still liquid inside. At the cart where we bought them, the lady had lots of different sauces full of flavours, from mayonnaise-like mixtures to spicy sauces, so make sure to try them all. 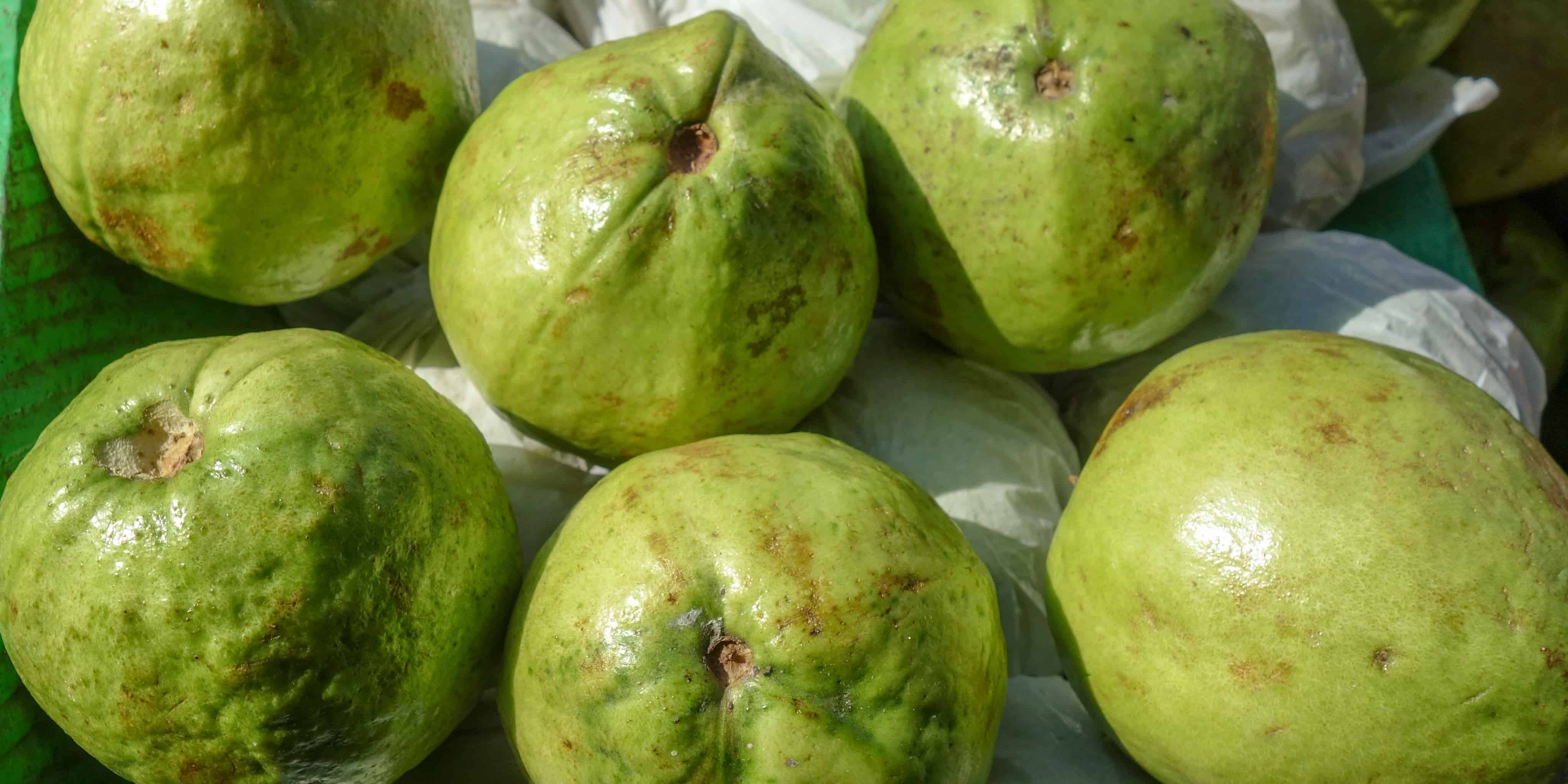 The guayaba manzana is similar to mango biche. It is a green guayaba, as crunchy as apples, which is served with lemon and salt. Just like mango biche, it results in a delicious mixture of salty and sour, with a hint of fruit.

Some vendors also have both, guayaba manzana and mango biche and you can get a bag with a mixture of both. 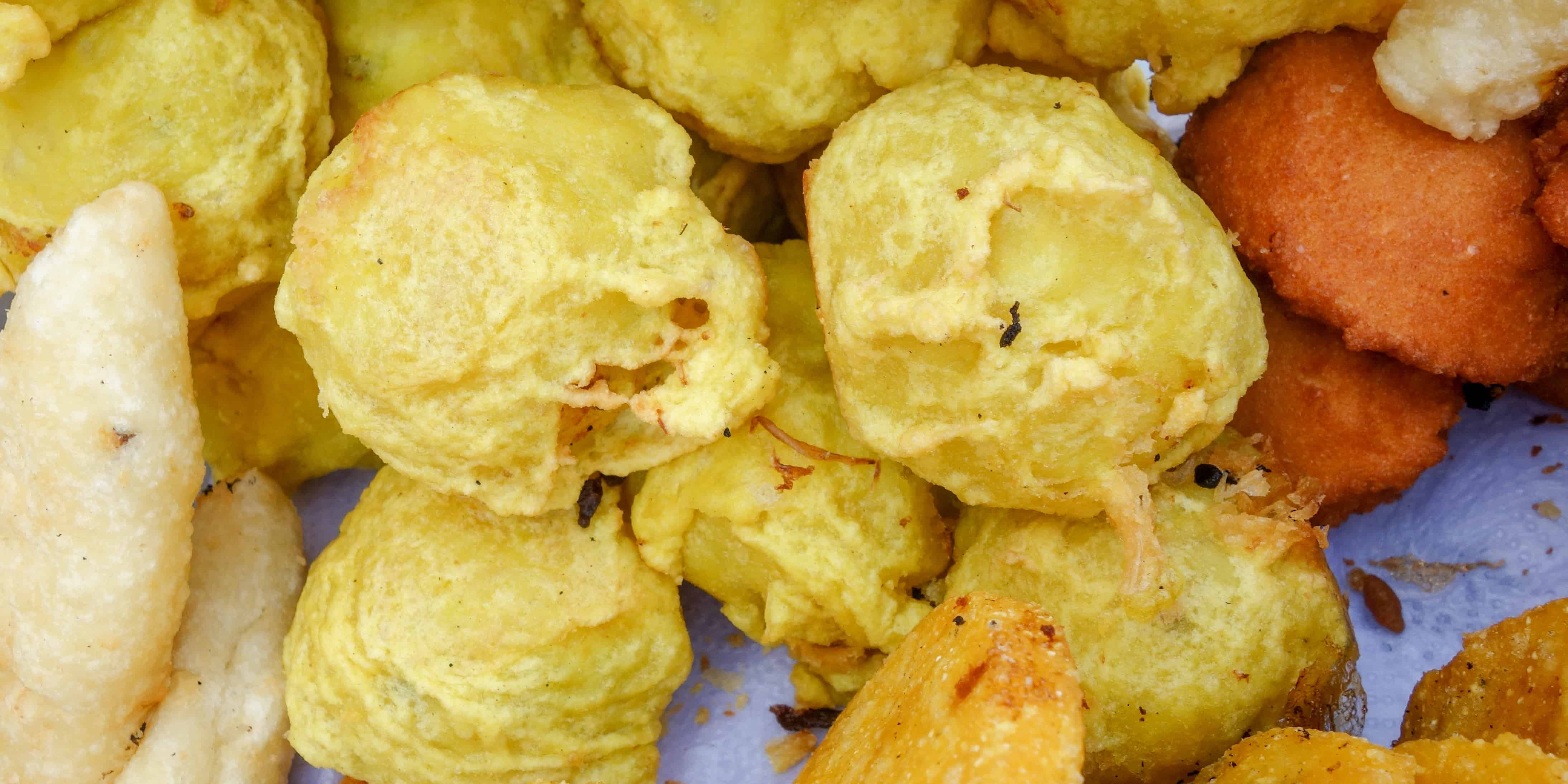 Papa rellena literally translates to stuffed potato and is a snack I have had in almost all Andean countries. And of course, I could also find it in Cartagena.

Papa rellena is made of mashed potatoes and usually filled with beef or cheese or both. It is, you guess it, fried. Be careful when eating it. I have a talent of smashing it while biting a piece off and then ending up with papa rellena all over me. 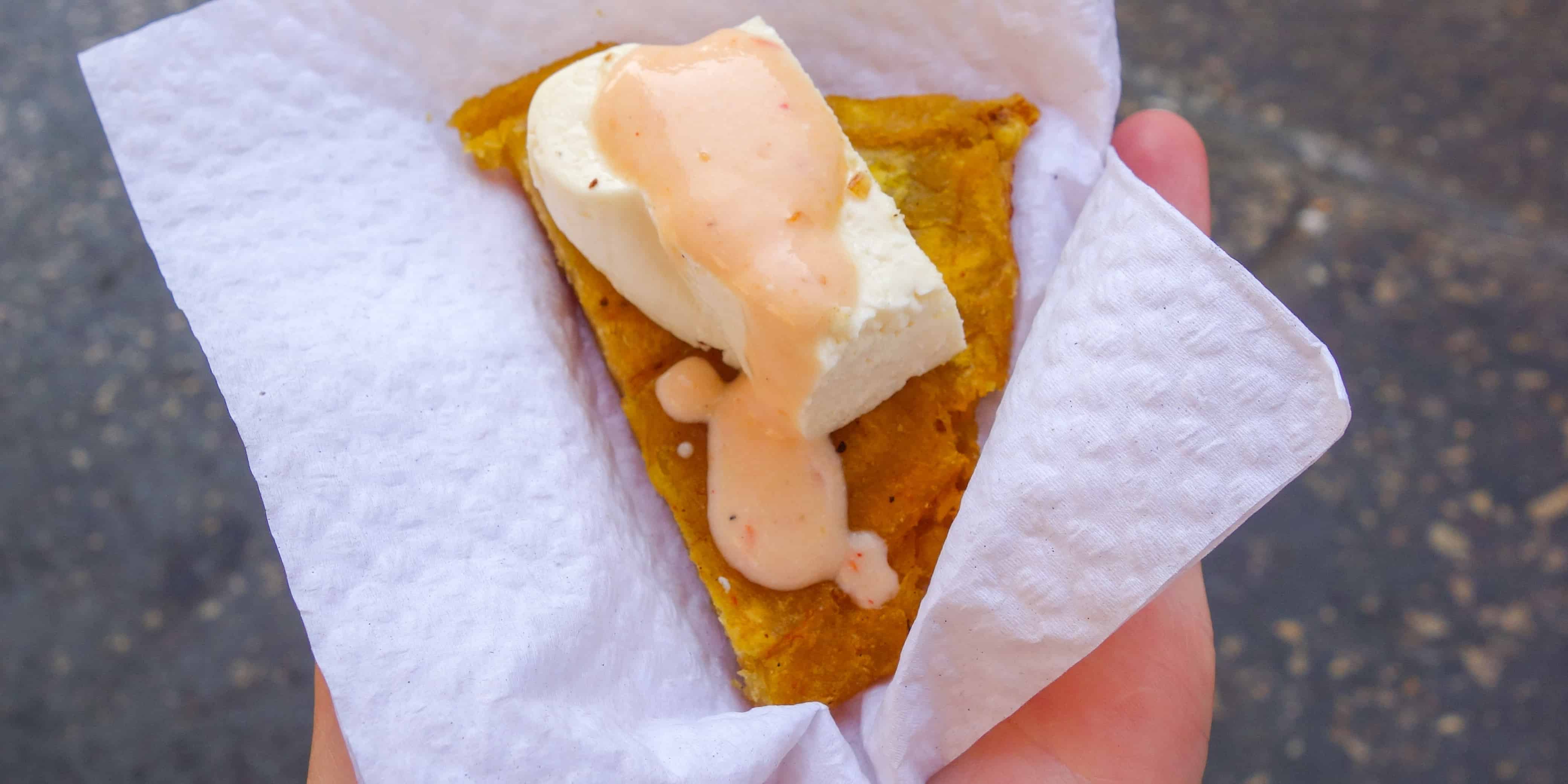 The patacon con queso was the first food we tried on our streetfood tour in Cartagena. Patacons are made of plantains that are cut into thin slices, mashed together and, like most streetfood, fried.

Since the patacon itself doesn’t taste like much, it is served with cheese. You can add sauces as you wish, but be careful. The sauce I spread all over my cheese ended up being very spicy.

Patacon, by the way, is also sometimes served as a side dish in restaurants. In Salento, for example, you will usually get a patacon when ordering trout. 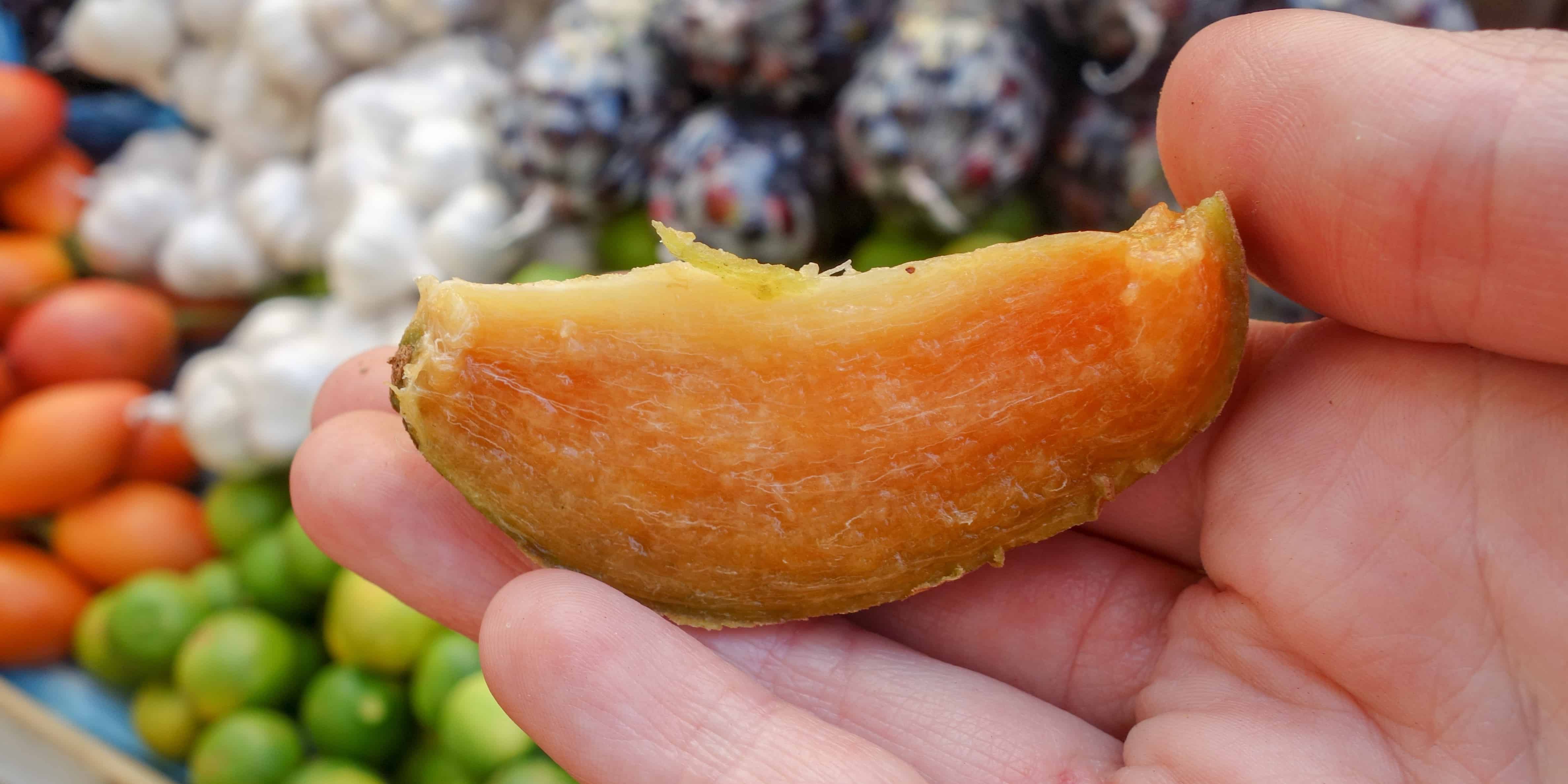 Nispero is an orange fruit that you can find at various fruit carts. It has a tough peel and black stones inside. You eat only the flesh and throw both the stone and the peel away. Nisperos have lots of fibres that will stick in between your teeth, but the fruity and sweet flesh makes it worth the effort of pulling out those fibres later on.

With Cartagena being located next to the sea, it is no surprise that the shrimps cocktail is a popular streetfood dish here. It does not necessarily contain only shrimps but can also be made of other kinds of seafood. The shrimps swim in a sauce that varies from one place to another but usually contains mayonnaise and lime and various other things.

You can get various serving sizes, depending on whether you just want a small snack or half a meal.

I hope I could help you and introduce you to some of Cartagena’s best streetfood. Let me know what you liked best and if you have any other recommendations. And if you have the chance, go on a streetfood tour. It is really worth it.

From Cartagena, you have many options of continuing your trip through Colombia. You could go to Medellin and from there to Salento. The hike to the Cocora Valley was one of my favourites in South America! Or you could take a bus to Santa Marta, which is not a super interesting city in itself but gives you the option for many cool trips in the area. And if you want to travel to Bogota, make sure to stop in San Gil along the way. 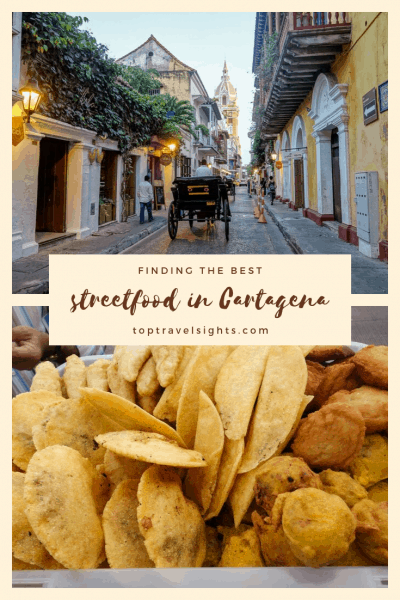