Did you know that Ireland is a great destination all year long?

Daniel and I flew to Dublin in February, not because we thought it was the best time to go there but because I had a few days of holidays that I needed to take. And, as I already mentioned in my post about top travel lessons learned in 2019, it was a great decision.

Ireland is beautiful and green all year round. And the place where you’re most likely to land, and which is also amazing all year long, is Dublin. If you’re short on time, like we were (we only had four days), I recommend you base yourself in the capital and see the country through day trips. Plus, there’s so much to do in Dublin itself that you won’t get bored. 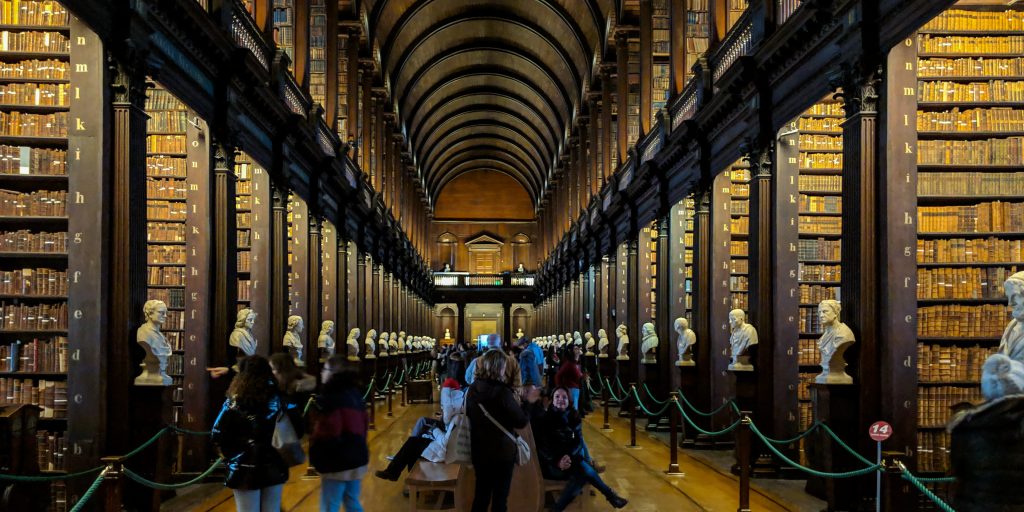 If there’s only one thing you can do in Dublin, you should visit Trinity College and the Book of Kells. The college itself is composed of beautiful buildings and worth a visit alone. Did you know that Trinity College is Ireland’s oldest university?

Daniel and I spent ages in that room. Remember that library from the Harry Potter movies? While the movies were not filmed here, as far as I know, it looks surprisingly similar. The rows are filled with ancient books and everything is insanely photogenic. Plan enough time here to take pictures before you move on to your next destination.

#2 Have dinner in the Temple Bar district 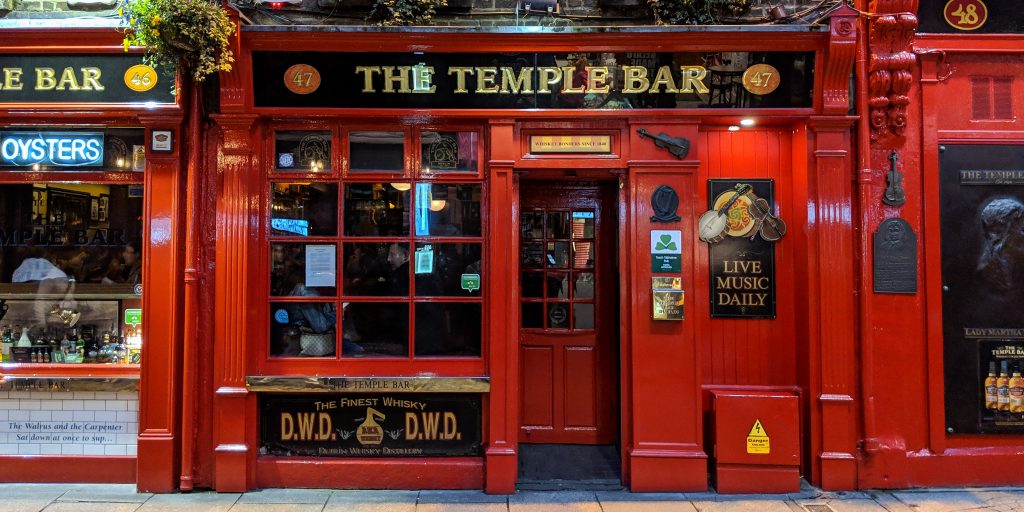 Here’s a confession: I didn’t like Temple Bar much from the inside. The bar is very pretty from the outside, but since I don’t like beer, I didn’t find the inside very interesting. But the whole area is so beautiful that I still loved it. Also, the whole neighbourhood is full of pubs serving traditional Irish food. Yes, they are very touristy. But the food is still good and you can try typical dishes there.

I can highly recommend the stews that most pubs serve. Or try the Dublin coddle, which is a dish traditionally made with leftovers like sausages, potatoes, and onions. Oh, and if you like beer, go and have one afterwards, either in Temple Bar or in one of the other many pubs.

#3 Explore the Little Museum of Dublin 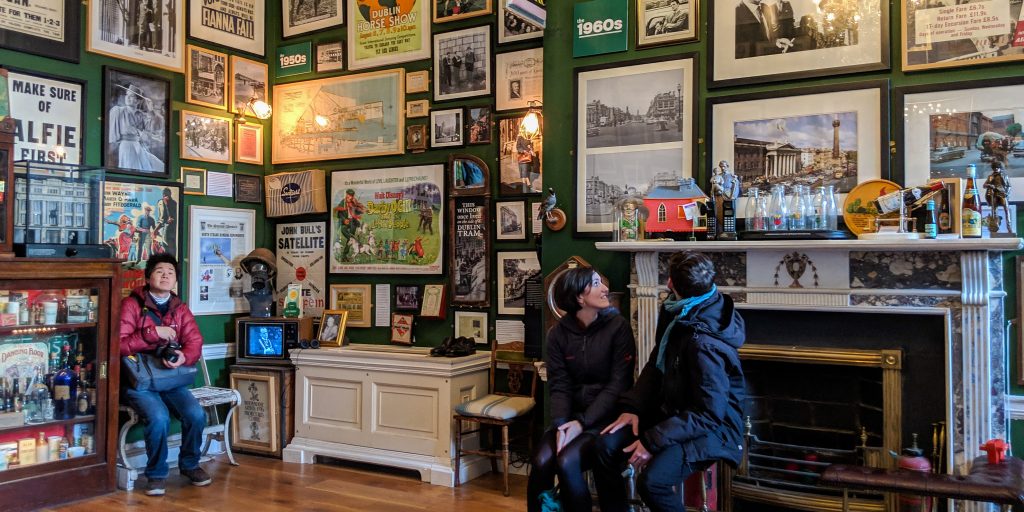 The Little Museum of Dublin was the last place we visited in Dublin and I’m so glad we went there. The museum might be tiny, but it is filled with exhibits and the tour is so much fun. I absolutely loved our guide. She was very funny but also explained the history of Dublin very well.

Since the tour is such a huge part of the museum, it is mandatory. You cannot visit without going on one, which is good, because how else are you going to learn about the history of the city in less than an hour? If you’re in Dublin in February, it shouldn’t be a problem to just show up and buy a ticket. But at any other time of the year, I suggest that you book online. The tours just take 40 minutes but they book out fast.

1h (40min for the tour, 20min for looking around by yourself) 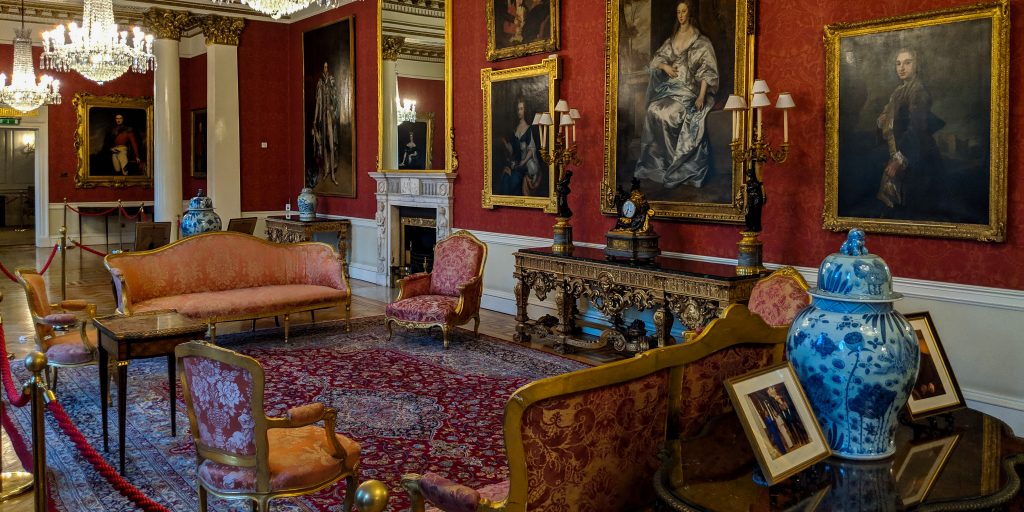 Dublin Castle is one of those attractions that completely surprised me. I hadn’t heard much about it and we came to the area more or less by chance, on our way to the Guinness Storehouse. It sounded interesting enough so we decided to quickly pop in.

That turned out to be a great idea. We joined a guided tour, which is something you absolutely should do since it gives you a lot of background information. We also got access to areas that you cannot visit without a guide. One of them included the basements, in which we could see the fortifications along the former river shore.

Yes, a river. Dublin Castle used to be situated on the confluence of two rivers. One of them was the River Liffey (it’s crazy to think how much that river has changed) and the other one is the River Poddle, which you cannot even see anymore because most of it runs underground these days.

Besides the river fortifications, you can also visit the interior rooms, which are very beautiful. You’ll see lots of old furniture and amazing decorations on display. And you get access to the Royal Chapel along the way.

The tour lasts one hour but once it’s over, you’re free to stay and explore the State Apartments on your own.

#5 Walk along the river 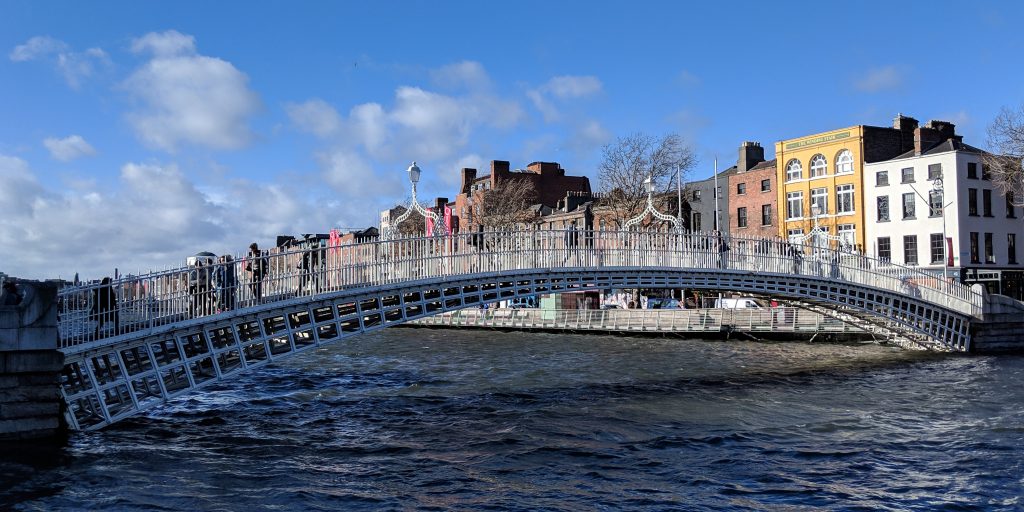 I’ve already talked about the River Liffey that runs across Dublin. It’s a great place to go for a walk and, if possible, enjoy a bit of sunshine. If you’re visiting in summer and the weather is nice, you could even go on a riverboat cruise. As we were in Dublin in February and we didn’t want to freeze to death (and there were so many other amazing things we wanted to do), we skipped the cruises.

We did, however, go for a walk to see Ha’penny bridge. This famous white bridge was the first one to cross the River Liffey. Before its opening in 1816, people always had to take a ferry. Imagine how annoying that must have been! Back in the day, when the bridge finally opened, the crossing wasn’t free. Instead, locals had to pay a ha’penny, which is where the bridge got its name from.

These days, you can freely walk over the river without any fees. And from here, you can easily get to the Temple Bar district for a nice lunch in a pub.

#6 Take the train to Howth 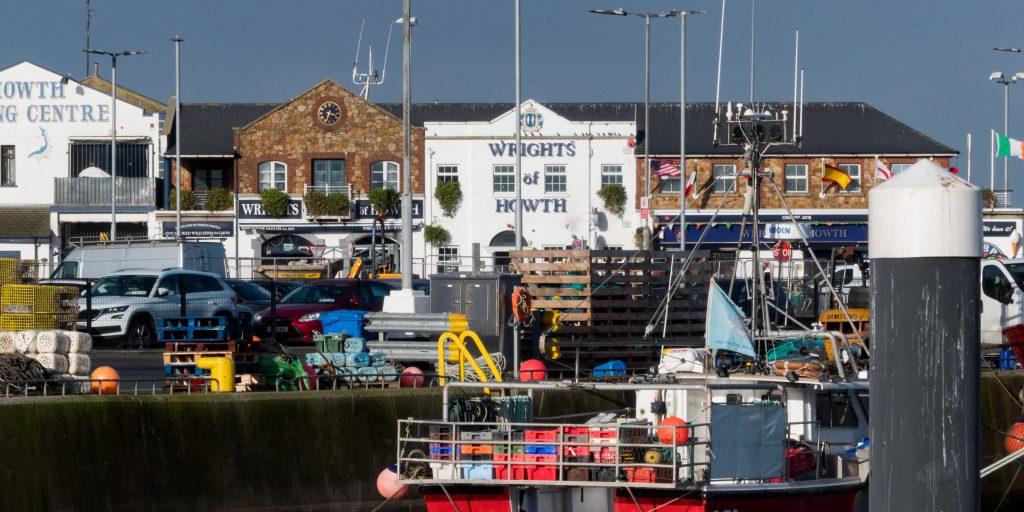 I really loved Howth. You can easily reach this little coastal village by taking a train from Dublin and it’s a great excursion for half a day. I’ve always loved the sea and the coast, so I enjoyed coming here.

We started our day with a walk along the harbour, then decided to go further and check out the lighthouse. That was very windy! If it’s already windy in the village, then be prepared to fight against storms so strong that it’ll feel like you’re pushing against a wall.

Nevertheless, the view from there is quite beautiful.

After almost getting blown away at the lighthouse, we decided to go into town. I was pleasantly surprised by how pretty the village is. The church in the centre is quite nice and we came past an old graveyard from where we had great views of the sea. Plus, in the middle of the graveyard stood some ruins from an old church, which were nice to explore.

If you’re looking for souvenirs, go down to the tiny market by the waterfront. It’s very empty in February, but you will find a few shops there. Also, if you have more time, I recommend you to go for a hike. You can find a few hiking trails in the area, from which you’ll have great views of the coast. 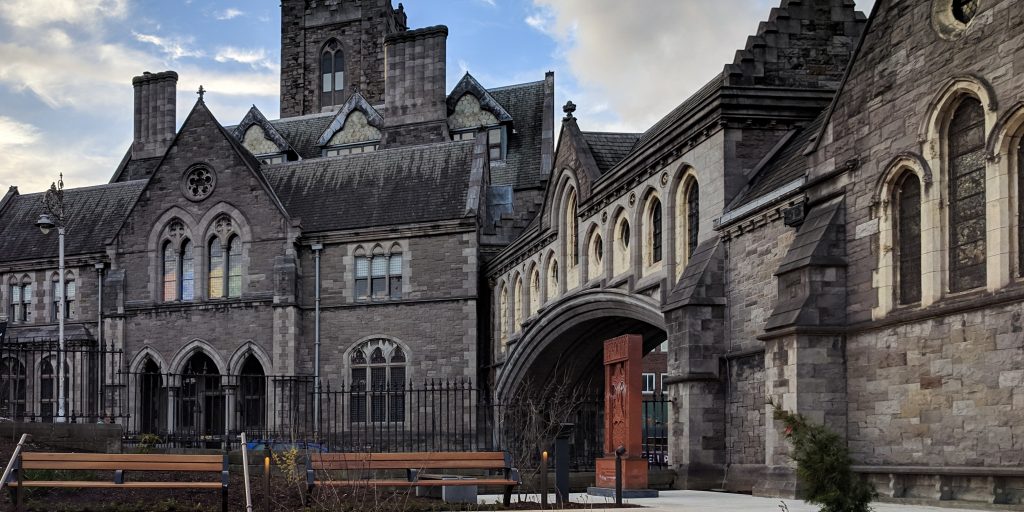 Christ Church Cathedral is one of Dublin’s most beautiful cathedrals. It is also Dublin’s oldest one and was founded almost a thousand years ago.

Unfortunately, they are very strict about their opening hours and the last admission is 45 minutes before closing time. We arrived a minute too late and they already wouldn’t let us enter anymore, so make sure to check their website for the most accurate information.

Even if you cannot go inside, the cathedral is so beautiful that you should at least drop by to see it from the outside.

#8 Drink Guinness at the Guinness Storehouse 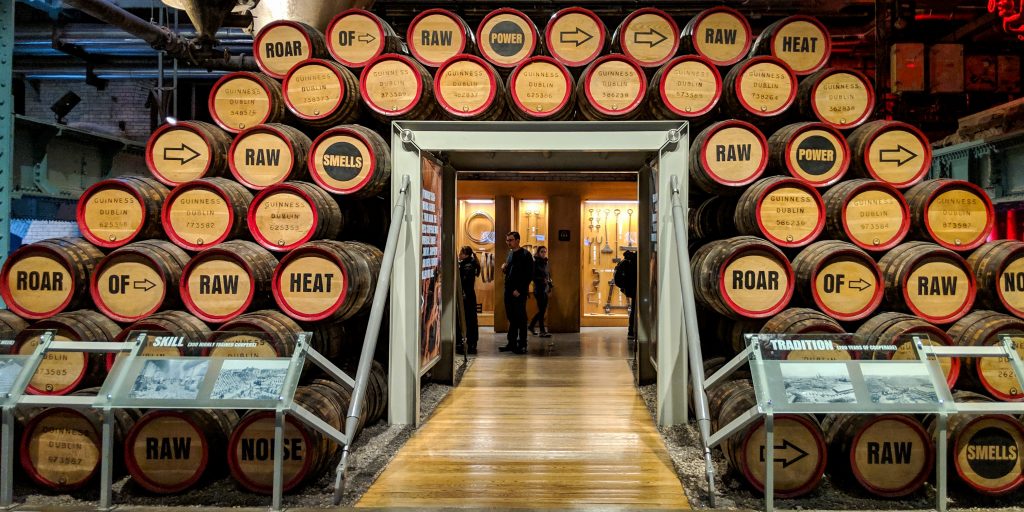 I will be honest with you. I wasn’t a big fan of the Guinness Storehouse. Maybe it’s because it was too crowded and touristy, maybe because I expected something different. The Guinness Storehouse teaches you everything you’ve ever wanted to know about Guinness. As it’s a very popular attraction, you should book your ticket in advance and arrive at the designated time slot. The tour will then take you through a giant souvenir shop and into the exhibition area.

The exhibition was quite informative, but also a bit too artsy for my taste. I would have loved for the information to be presented more clearly, to learn how Guinness is produced. Be prepared for a lot of light installations and also a lot of advertisement about how great this beer is.

Maybe my problem is that I don’t like beer much. I think I would have enjoyed it more if I did. It was still fun. We went into a tasting room, watched videos about the production of barrels and, in the end, received a free drink on the top floor, from where we also had a great view of Dublin.

So there are nice things about the storehouse, but if I came back to Dublin, I’d rather do something else than come here again. 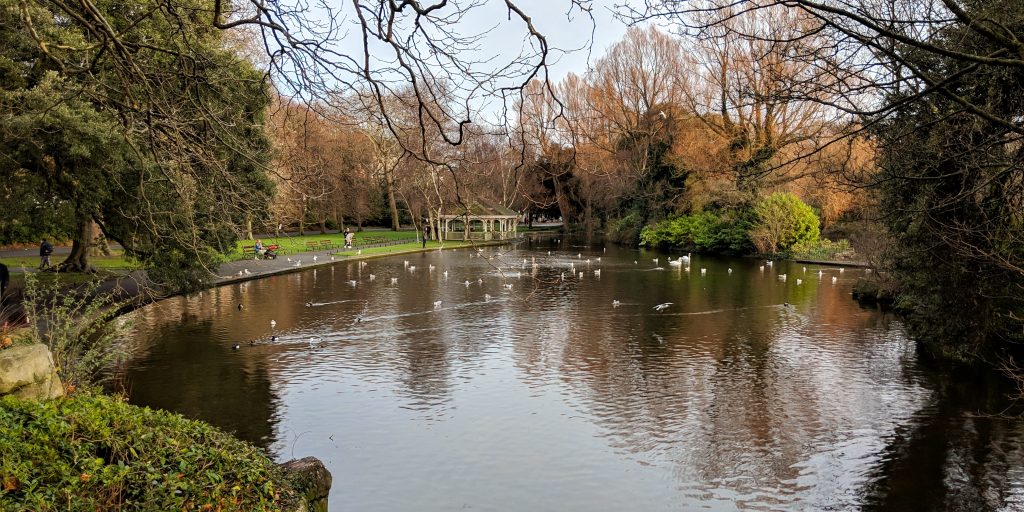 From where we stayed in Dublin, we had to walk past St Stephen’s Green every day to get to the city centre. It’s a giant park with a lake in the middle and I imagine that it’s the perfect place for a picnic in summer. Even in winter, St Stephen’s Green is great if you want to go for a walk and escape the city life for a while. 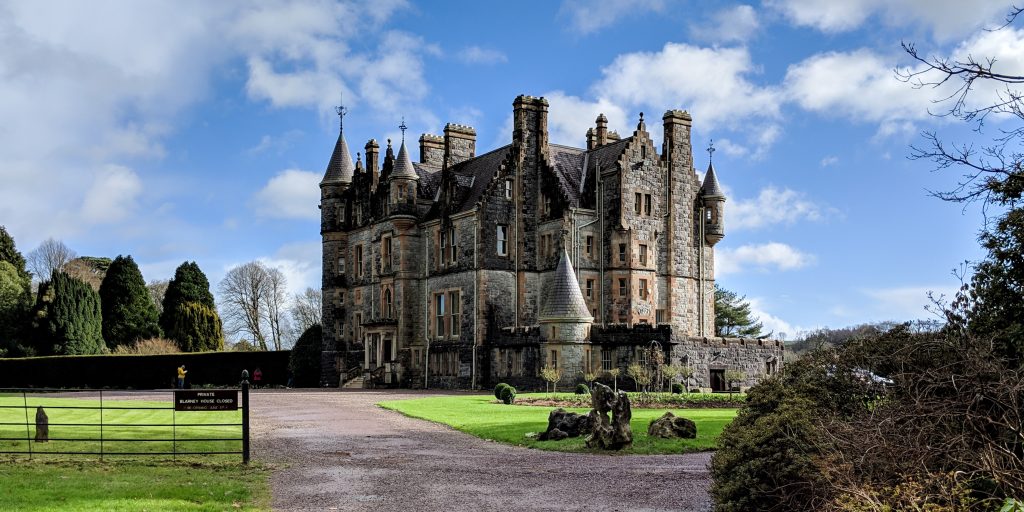 As I mentioned in my introduction, Dublin is the perfect city to base yourself if you want to explore Ireland. We did two day trips while we were here, one to Northern Ireland and one to the south that included Blarney Castle and Cork.

The nice thing about Ireland is that the country is quite small and filled with tourist attractions. I think it’s possible to see most places on day trips from Dublin. We went with Paddywagon Tours, simply because they had the best prices. The tours were great! Our guides were very knowledgeable. We had a lot of amazing stops along the way and I even kissed the Blarney Stone.

If you wanted to, you could also rent a car and drive around yourself. It gives you more freedom to stop wherever you want, which is nice. On the other hand, you won’t have a guide to tell you stories about life in Ireland, which is something that I really enjoyed.

If we’d had more time, I would have wanted to do a trip to the Cliffs of Moher. But that’s something that will have to wait for next time.

There are, of course, many more things to do in Dublin. The city is full of sites and attractions, so we could easily have spent another three or four days without getting bored.

Have you been to Dublin? Let us know in the comments below which was your favourite place. 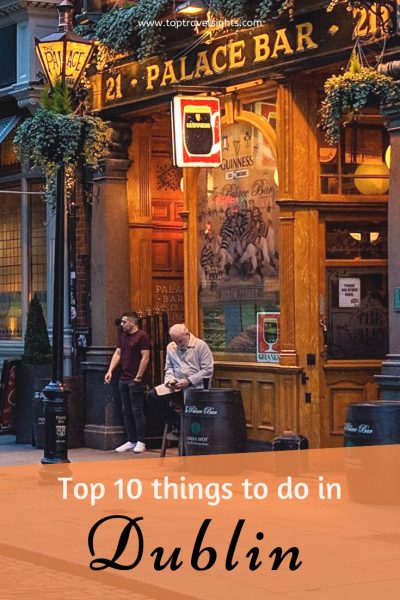