We arrived in Kuressaare on a stormy day. A storm had just flooded Pärnu and the waves were so high that I felt sick on the ferry. To be honest, I often feel sick on ferries, even when others can’t feel the movement of the ship at all. But that day was grey and stormy and when I went to the deck for a minute, the wind almost blew my hat off.

So you can imagine our first impression of Kuressaare. Rainy, windy and grey. Fortunately, we had booked a room in a spa hotel and could spend the rest of the day relaxing in a whirlpool. The next day was much better. After a bit of rain in the morning, we were left with a whole day of sunshine.

Saaremaa is Estonia’s biggest island and if you want to properly explore it, you need to come in summer and bring your own car. We went in winter and used public transport. But despite these limitations, we had an amazing time. Don’t let the season or the lack of a car scare you from going to Saaremaa, as there are plenty of things to do here.

We suggest taking a full day to explore Saaremaa’s biggest town, Kuressaare, and to follow this itinerary:

Walk Through the Old Town 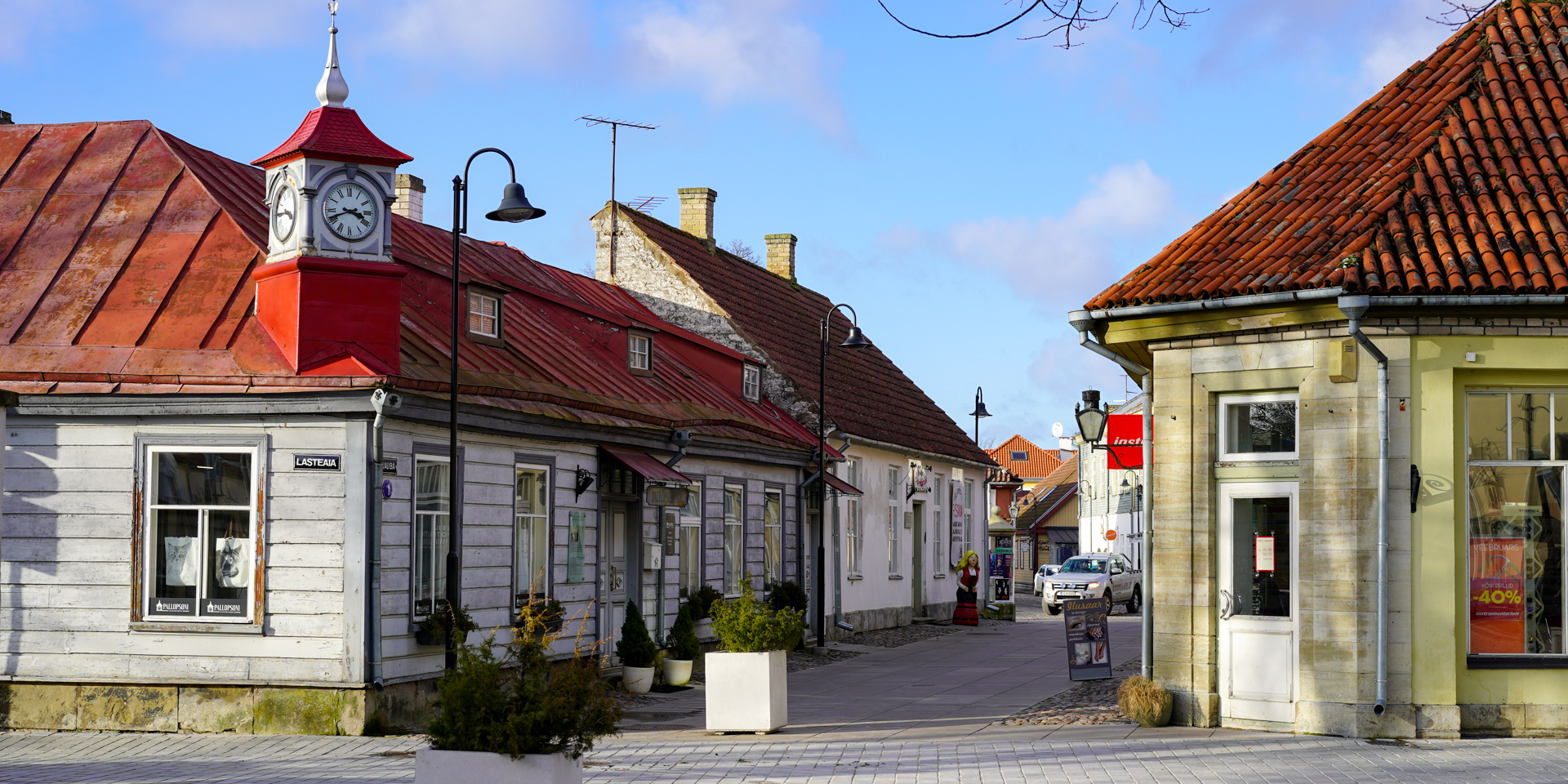 Start your day by walking through Kuressaare’s Old Town and by taking in the many wooden buildings. A good place to stop is the central square, where you will find many historical buildings. Make sure to take a proper look at the Town Hall, which dates back to 1670. These days, it houses the tourist information, so it is a good place to ask any questions you might have about Saaremaa. They also have a painted ceiling that is supposed to be pretty, although we didn’t get to see it because the tourist information closes on weekends in winter. But if you go there, please let us know how you liked it.

Pretty much opposite the Town Hall, you can find a pub inside a weigh-house from the 17th century. Go and take a look in the side streets behind the pub. With their cobblestone and wooden buildings on both sides, they are very photogenic.

Once you’re done at the central square, start walking southwards towards the castle. You will find more pretty buildings along the way until you arrive at the castle park. 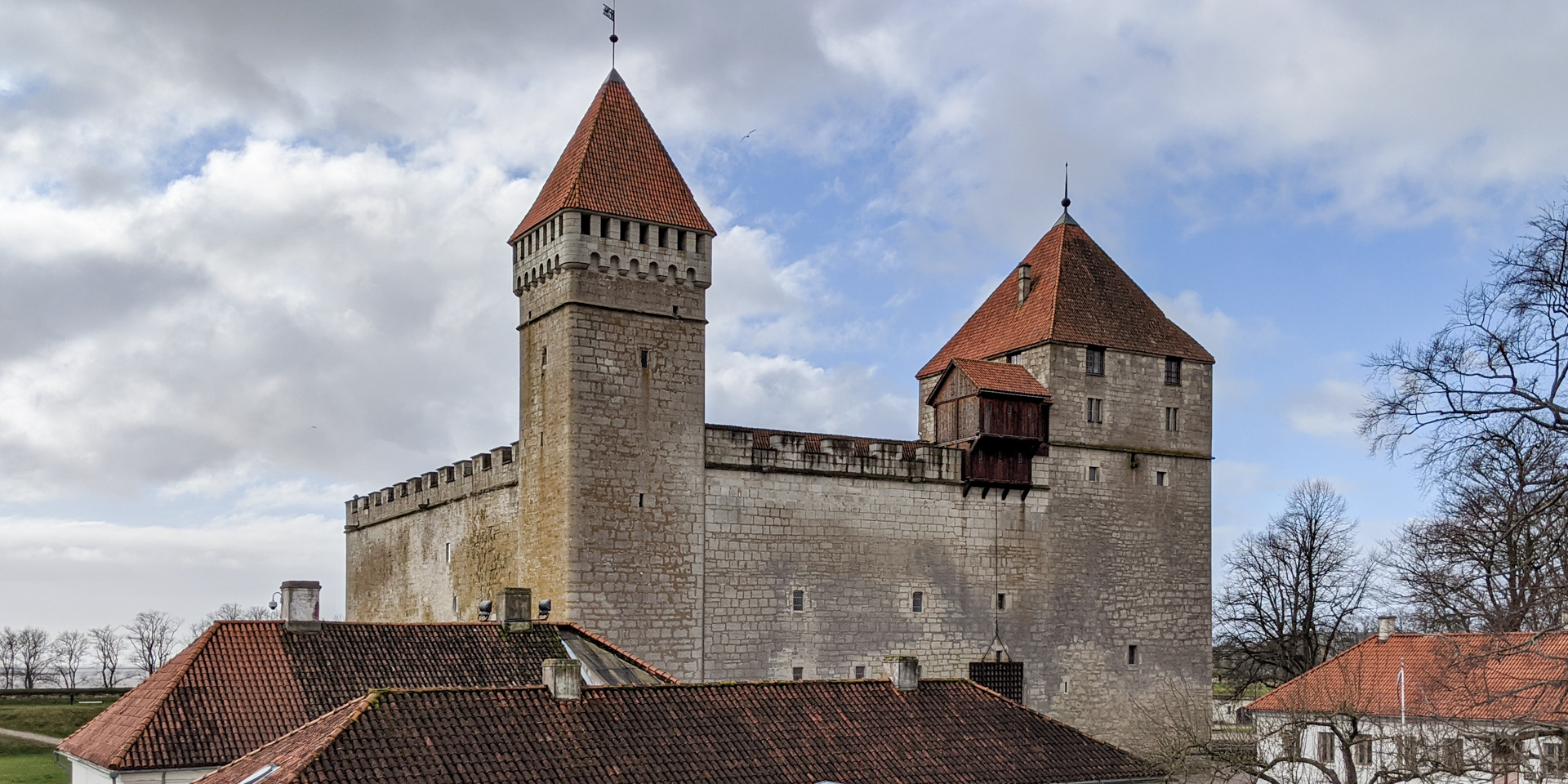 The one thing you have to do in Kuressaare is visiting the castle. Before you go in, though, take a moment to walk through the park and to look at the Kuursaal, a building that dates back to 1899. Afterwards, cross the bridge and get into the castle.

Kuressaare Castle dates back to the 14th century, with some parts added over the following centuries. Inside the castle, you can find different exhibitions. Climb down the stairs and you’ll get to the temporary exhibition. If you go up, you can explore the whole castle, from the cloister to the chapel and the guard towers.

In the rooms, you can find an exhibition about the history of Saaremaa, starting with some pretty old relics. Going through the exhibition can be confusing and I think we started somewhere in the middle, so make sure to follow the arrows and turn right after climbing the very first staircase.

As we said, the exhibition covers pretty much everything you could want to know about Saaremaa, from the Middle Ages to the independence of Estonia, the Soviet and Nazi occupations and life in the Soviet Union. You will have to climb up lots of stairs, but in the end, you’ll arrive on top of a tower from where you have a nice view of the castle grounds.

Walk along the waterfront 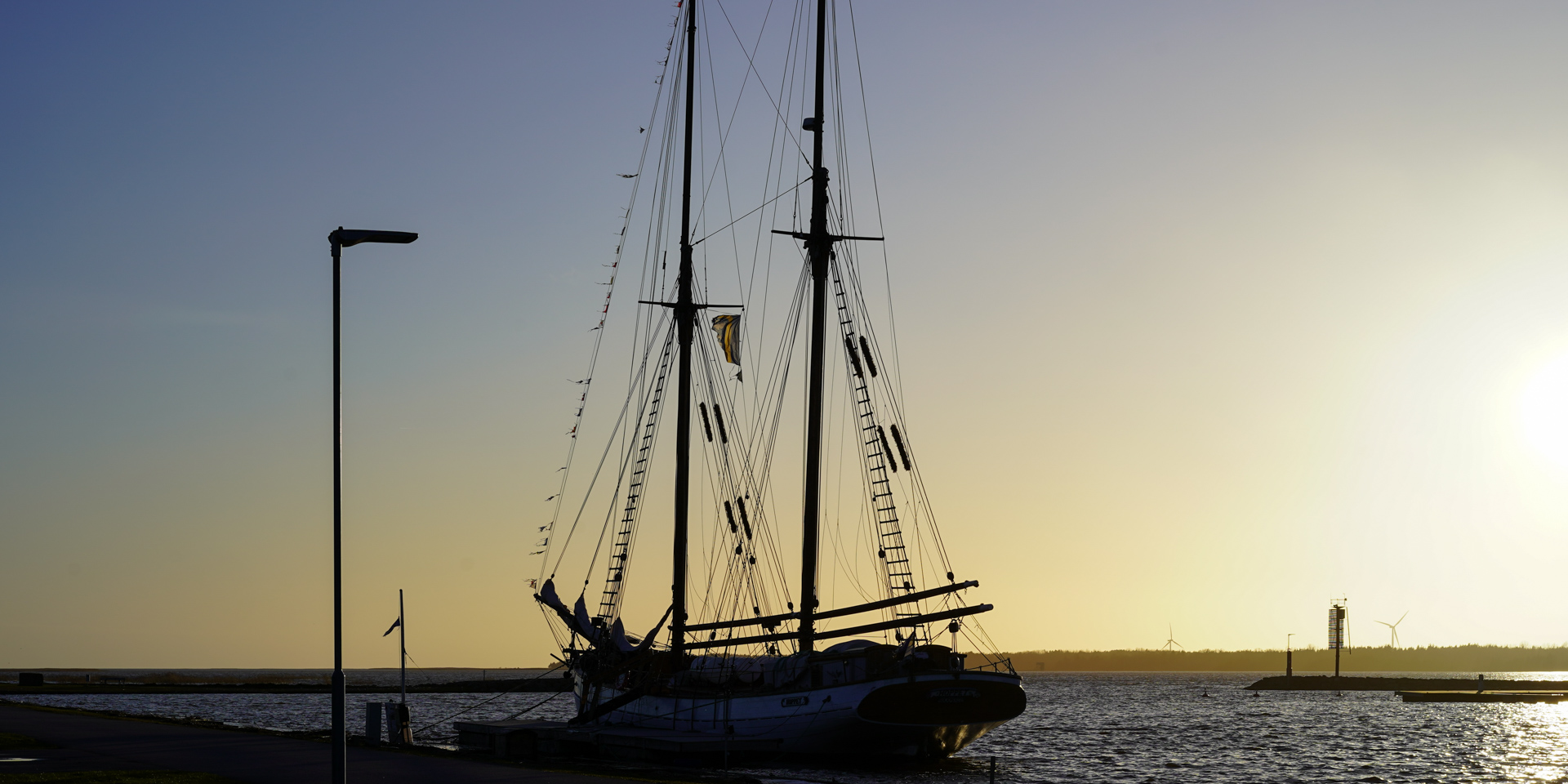 After you’re done visiting the castle, take some time to walk across the castle grounds. If you’re hungry, take a look to see if the Kuursaal is open, as that’s a good place to grab a bite to eat. In winter, when everything closes, you might have to walk a bit towards the central square to find a restaurant.

Your next stop for the day is the waterfront. South of the castle, you can find a tiny beach. Go for a walk along the sea, both on the beach as well as on the paths laid out along the water. We saw a pretty sailing ship in the harbour. Besides that, everything was still flooded from the storm the previous day, so we didn’t spend too much time here. But in nice weather, this is a good place to go for a long walk.

Relax in a spa

After you’ve braved the wind on the coast, it is time to relax. If you haven’t had anything to eat yet, you should go and find a restaurant. Afterwards, this is your chance to explore the many spas that you can find in Kuressaare.

We stayed in the Spa Hotel Rüütli, so we could use the pool and the saunas as much as we liked. But even if you’re not staying there, you can buy a ticket for the day. The pools are quite cold but big enough for swimming, and there’s a waterslide. Also, you can find a whirlpool here which is nice to relax. The only downside is that the saunas are separated by gender, so Daniel and I couldn’t go there together.

If you want any spa treatments, you can book them at reception.

An alternative to the Spa Hotel Rüütli is the Grand Rose Spa Hotel. From what I’ve seen, the spa centre here is even nicer, with steam baths, saunas and jacuzzis to soak in. It’s a bit more expensive but probably worth the money.

You could also explore any of the other spas in Kuressaare and then let us know how you liked it, so we can include it in our recommendations here.

Have dinner in a windmill 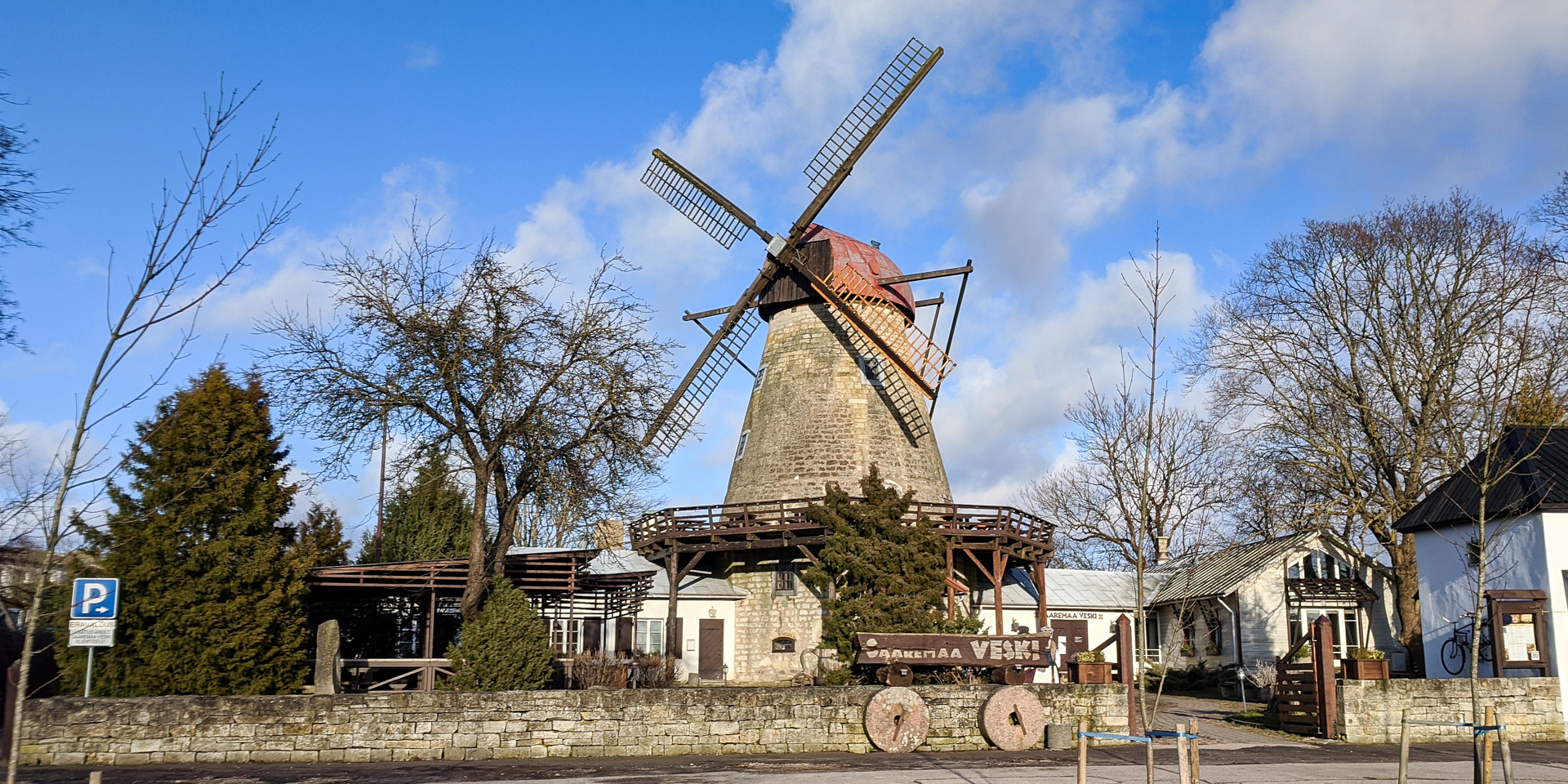 Do you feel properly relaxed now? Then it’s time to head to dinner.

Saaremaa is known for its many windmills. While the windmill park is too far away to go there now, you can have dinner in a windmill, right in the middle of Kuressaare. Head to the Saaremaa Veski, located close to the central square. The windmill dates back to 1899 and not only does it look pretty, but the food you can get here is also very good. Try the cheeseballs for a starter. If you want to have some local food, we can highly recommend the boar. Also, the kama jelly is a very local dessert that you should try.

Just keep in mind that the windmill is closed on Sundays, so if you’re here on a weekend, try to come to this restaurant on a different day.

If you have more time on Saaremaa, you should check out the Kaali meteor craters. We wanted to go but unfortunately, it was Sunday and no buses were going there. During the week, though, it shouldn’t be a problem to catch a bus to Kaali and back again.

You could also visit the windmill park at Angla or the Panga Cliffs. Both can be reached by public transport and you can find the schedule at http://www.bussipilet.ee/bus_stops. 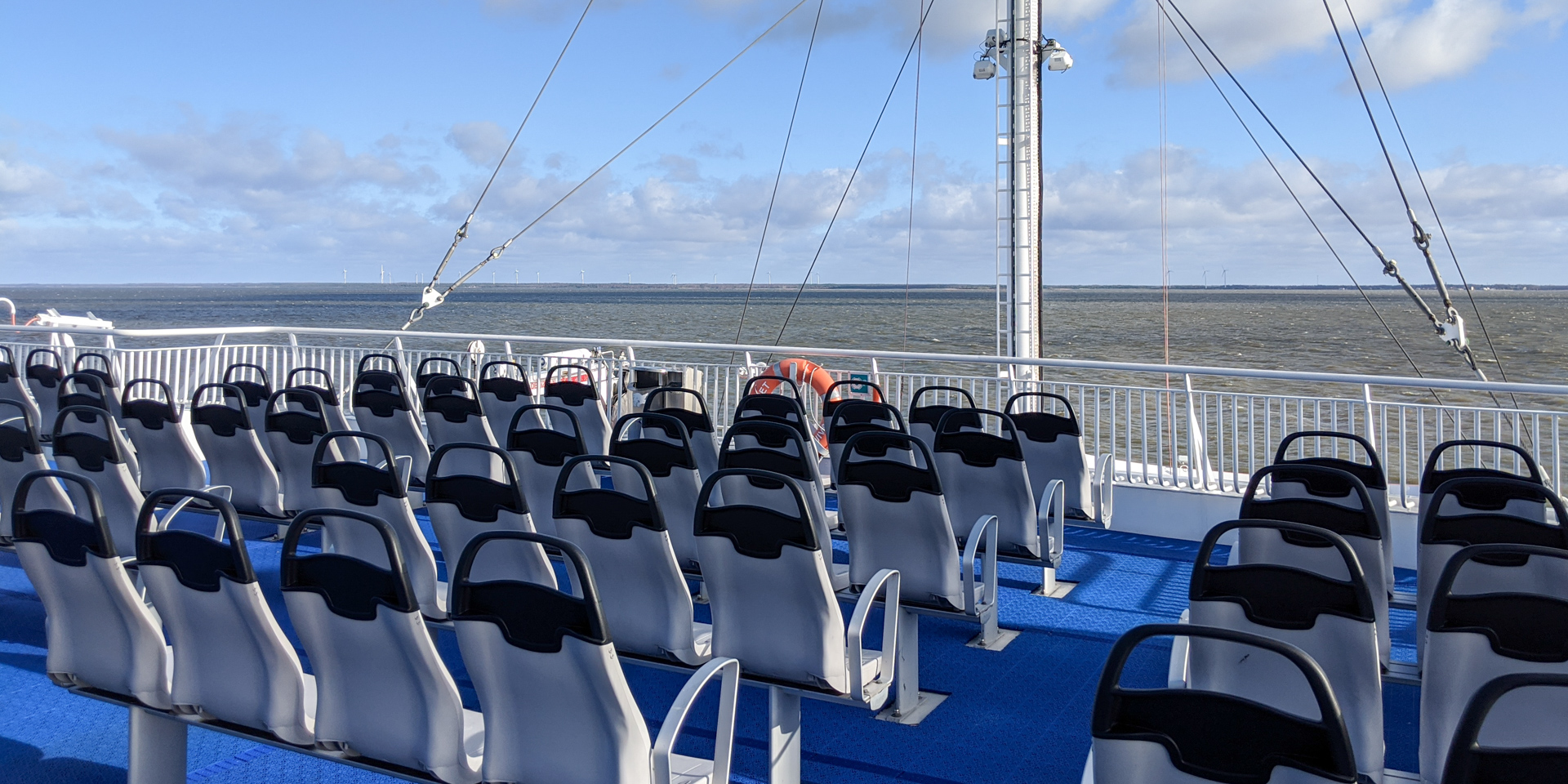 As you already know, Kuressaare is located on an island. The only way of getting here is by ferry. If you have your own car, you can go on that ferry with your car. If not, you can take a bus from Tallinn or Pärnu. The busses include the ferry ride so you don’t have to worry about anything. You just get on the bus, get off once the bus is on the ferry, get on again and then step out of the bus in Kuressaare. It’s easy, convenient and takes only four hours from Tallinn.

There you have it, an itinerary for one day in Kuressaare. Don’t make the same mistakes that many tourists do and visit only Tallinn. Estonia has a lot more to offer. If you’re thinking of spending more time in the country, consider visiting Tartu or Pärnu, too. You’re not going to regret it. 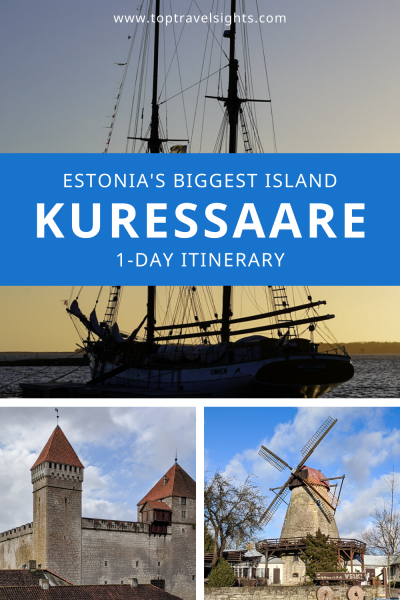