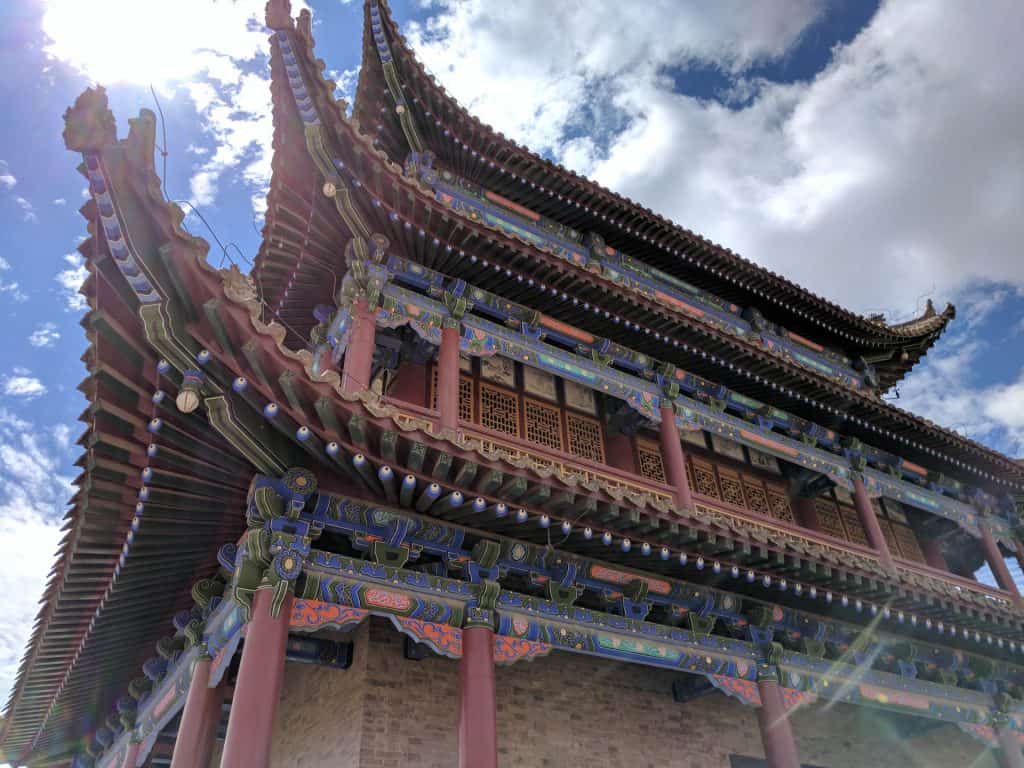 Along my way through the Chinese part of the Silk Road, I couldn’t miss the Jiayuguan Fort. Located northwest of Gansu province, near Jiayuguan City, the Jiayuguan Fort is the westernmost one of the Great Wall. Not only that, but it’s also one of its main passes. Its location in the narrowest point of the Hexi Corridor, the traditional trading route of Gansu, made the fortress very valuable in ancient times.

For its strategic location and reputation, the Jiayuguan Pass is known by the colourful name of “First and Greatest Pass under Heaven”.

Today Jiayuguan is the most intact ancient military building from all the Great Wall passes and attracts thousands of tourists every year. It was added to the UNESCO World Cultural Heritage Sites in 1987 and is one of the main sights of Gansu province and the Gobi desert.

In 2011 the Pass was restored using a 2.03 billion yuan investment by the Chinese government. Interestingly, the government ordered using original ancient construction materials and techniques to keep the fort as authentic as possible.

A fortress of legends

The construction of the fort started in 1372, but it took more than 150 years to complete. The remote location and difficulty to reach were among the main reasons for such a large construction time.

The length and the greatness of the Pass inspired a couple of legends about its construction. Probably the most famous one involves Yi Kaizhan, a mathematician known for its precision. The official in charge of the construction asked him to estimate the number of bricks the whole pass would take. After some time Yi calculated that the project would require 99,999 bricks. The officer didn’t think it was enough, so Yi added one more. After the pass was finished, there was only one brick left, placed loosely on one of the gates, where you can still see it today.

This legend has many variations, but the amount of 99,999 bricks and the final one left on the gate are present in all of them.

In one of the variations, Yi didn’t add the extra brick, and his superiors decided to punish him for the lack of precision. He was off by one brick after all! It looks like they had pretty high standards back then. Yi, however, said that the brick should be left there. According to him, a god put it to preserve the stability of the fortress and moving it would make it collapse.

Although it has lost its military importance the Jiayuguan fortress has actors playing as soldiers, generals or prisoners, artists singing Chinese opera and martial artists performing kung fu, dancing and art shows in the courtyard.

There are several historical places and museums you can visit and a big garden outside the main complex. The fortress is also decorated with ancient Chinese flags, and there are different activities you can do -for a price-, like riding a camel, archery or just walking around the markets to find something nice to buy.

While I was in the Jiayuguan Fort, one of the greatest surprises was the fantastic martial arts show some skilled artists performed. Acrobatics, dancing, flag-waving, theatre, fighting… A great spectacle that gathered all the people around the main courtyard.

Between yurts and ancient weapon racks, all the artists involved were dressed up to look like ancient Han soldiers, monks, prisoners or dancers. I was especially captivated by the fan show, but all of them had a beautiful choreography and gorgeous costumes.

The other show that I found particularly interesting was the Bian Lian or Face-Changing. This art comes from traditional Sichuan Opera and consists of an actor changing his masks one time after another in the blink of an eye. Watching that live was spectacular, the speed, the colourful masks and the choreography combine to give quite an experience. I have seen the Bian Lian many times after, but I will always remember my first show in the fortress.

A Must-see in Western China

I hope I have managed to convey the incredible experience that is visiting the Jiayuguan Fort. Western China is not the most touristic area of the country, but if you find yourself in the area, make sure to stop here, take your time, explore the area and enjoy the show. The Chinese Silk road has plenty to offer, and this is one of these hidden gems that is worth a visit.

If you have enjoyed this article, or you are interested in the area, there are a few blog posts that you might find interesting or that can help you plan an epic trip through Western China:

I hope you had a great time reading this blog post. If you liked it and you want to support us, please share it on your favourite social media.

Until your next adventure!