“I was born and raised in Iquitos,” Osmar told us. “People from the communities often say that city people can’t be good jungle guides, but that is not true.”

We were sitting in a tiny restaurant in Iquitos, in Northeastern Peru, sipping tree tomato smoothies. The orange drink tasted fruity and slightly acid at the same time, a mixture as exotic as the city. Having arrived from Patagonia the night before, everything seemed new and exciting. The small, colourful houses, the mud roads, the motortaxis honking in the street, the seemingly endless line in front of the ATM we had used earlier.

Osmar, our guide, had picked us up at the hostel that morning and he was going to take us into the jungle. I had stayed in the rainforest before, even in Peru, but this was different. Today, I would see the Amazon for the first time.

A couple of hours later, we cruised down the river. “This is where the Ucayali and Marañón rivers join and form the Amazon,” Osmar told us, motioning around us. Wherever I looked, I saw water and it suddenly made sense to me that it was called the mighty Amazon.

We arrived at our lodge not long afterwards, crossing a green expanse of water lettuce to get to the pier. Osmar explained the rest of the day to us. We were going to have a moment to rest before lunch, and in the afternoon, he would take us on a boat ride to spot some animals. Jungle-born or not, for now he seemed like he knew what he was doing.

That afternoon, he took us on a boat ride to see monkeys and sloths. Having never seen a sloth in the wild, my friend and I had asked him if he could find one for us.

He did not just find one. We weren’t gone far, when Alex, our boat driver, stopped the engine and pointed up. He said a few words in rapid-fire Spanish and Osmar nodded. “Sloth,” he translated.

“Where?” Both my friend and I looked up. I saw trees, their branches thick and green. The leaves rustled in the breeze. Shielding my eyes from the sun with one hand, I shook my head. “I don’t see it.”

“It’s sitting nearly at the top. Can you see the white branch on the left? Follow it to the fork and then go up. That’s where you find it.”

I squinted, trying to see something other than leaves and feeling very much like a city-person. I had spent my whole time living in cities, except for an exchange year in Canada. But even then I had lived in the largest town in the area. Yes, I had tried to go out into nature as often as possible but there was a big difference between a German birch tree forest and the Amazon jungle.

And even in German forests, I had never scanned the branches looking for animals. Besides birds and the occasional squirrel I wouldn’t find much – and squirrels are much easier to see than sloths.

“It’s moving,” Osmar told us. I squinted even more as if it would give me the superpower of finding sloths, and that’s when I saw it. High up in the branches, leaves rustled. That ball, its grey-greenish colour almost indistinguishable from the leaves, had to be the sloth. Even with the binoculars that Osmar gave to me, I could barely recognise it as an animal.

Osmar was the one who spotted the next sloth. Once again, I would have driven straight past. In the anchored boat, it took me five minutes to make out the sloth in between the leaves.

Osmar was also the one who spotted the iguana.

A group of parakeets flew above us. Their loud bickering caught my attention and I looked up at the green birds before returning my attention to finding that iguana. The sun burned down on us without mercy. Sweat ran down my back. I wasn’t surprised the iguana had chosen a shady spot in the tree to hide.

“Oh, there it is.” Suddenly, the shapes transformed themselves into one that I could recognise. Osmar had seen it from twice as far away while sitting in a moving boat.

“How in the world did you find it?” I asked him, absent-mindedly slapping a mosquito that had landed on my arm.

Osmar shrugged in reply. “Practise. And my grandparents come from a community. I often stayed with them during my holidays.”

I wondered what his childhood looked like compared to mine. I had camped on campgrounds in lush meadows, where the most exciting animal I could catch was a cricket. He had probably spent his holidays canoeing on the Amazon and looking out for jaguars. I tried to imagine him and his childhood friends, a group of boys with wide smiles trying to kick each other off the boat while paddling zigzag. In my mind, I could almost hear their laughter.

That evening, Osmar found us a caiman. Alex expertly steered our boat in between giant lily pads whose shape I could barely make out in the darkness. I watched a firefly light up and disappear again when I heard his voice. “There you go.”

The caiman was tiny, even though, as Osmar told us, he wasn’t a baby anymore. But he was young enough that his chances of survival weren’t good. Caymans lay up to 70 eggs at the same time but barely any off their offspring survives the first ten years.

I shivered in a cold breeze as Osmar shared his knowledge about the little guy we had found. Knowledge that he had acquired from books and from other guides, because there was no specific education for becoming a jungle guide. Or for learning how to spot animals in the bush. You either learned from others or you failed. Osmar had learned quite well.

Four days later, we stood in a taxi stand near the harbour, waiting for our transport back to the airport. “What made you become a jungle guide?” I asked Osmar.

He pointed at a boy, not older than nine or ten years. Under one arm, he carried a stash of newspapers, calling out Spanish words I did not understand. He briefly glanced in our direction, then looked away again when he caught me staring at him.

“When I was his age,” Osmar told me, “I kept seeing gringos in town. But I was just like this boy. I didn’t speak any English and I didn’t feel like I could ever talk to them. And that was when I made a promise to myself. That I would study English and one day become the guy who is guiding all those tourists into the jungle.”

I looked back to the young boy, hoping he had a similar career ahead of him, before grinning at Osmar.

“Congratulations. You have made it.” 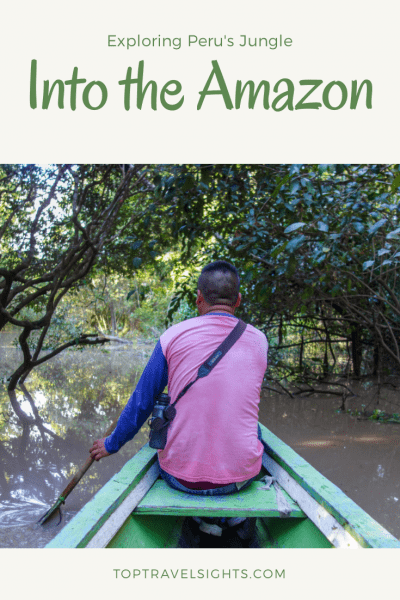