During the last ten months of travelling, transportation had always been straightforward. Along the Silk Road, I did an overland tour and used a truck. Through Southeast Asia, we went by bus. Those buses were comfortable and drove from one touristic place to the next. In French Polynesia, buses were irregular but distances were mostly short and I had more than enough time to wait. And in South America, I might have had to switch buses once, but rarely more than that.

It wasn’t until I got to Costa Rica that I faced my first challenge. We were in Puerto Viejo de Talamanca and wanted to go to Tortuguero – without taking one of those very expensive shuttles that cost two or three times as much as public transport. The guidebook wasn’t very helpful and while I could find some information online, it was lacking important bits and pieces – like the travelling time between some of those places. This is why I have decided to put together this guide, to help you get from one place to another without having to pay for an expensive shuttle.

The first thing you need to do is to get from Puerto Viejo de Talamanca to Puerto Limón. Buses leave from the Mepe bus station on Avenida 73 (the road by the water, opposite the Parque de Puerto Viejo). Outside the ticket booth, you can find a sign with the departure times. I suggest checking here one or two days before, just to know the exact schedule. Don’t forget that there are fewer buses on Sunday and holidays.

We took a bus at 7:30 am. You might maybe get away with taking a later one, but the later you leave, the higher the risk that you will end up stuck somewhere along the way – and believe me, you do not want to spend the night in Cariari. The 7:30 am bus leaves you with plenty of time in case of delays, missed buses or roadblocks.

It takes about an hour and a half to get to Puerto Limón and we arrived there at five minutes to nine.

Step 2: From Puerto Limón to Guápiles 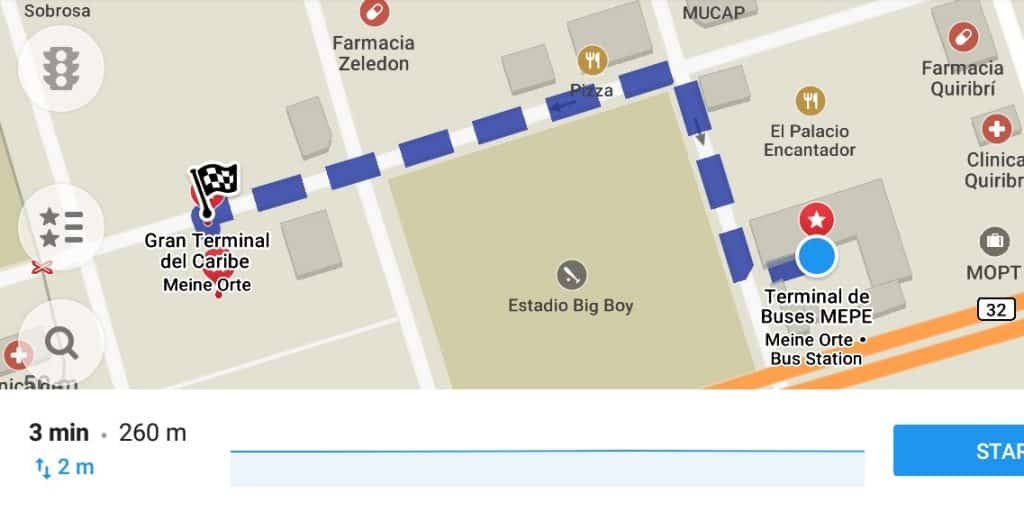 Here, ask for a bus to Guápiles. We were lucky and got the bus at nine, but if your first bus takes a little bit longer, you might have to wait for an hour. This is where having taken the 07:30 am bus comes in handy. Even if you spend an hour sitting around the terminal, you can still catch the last boat to Tortuguero.

The bus to Guápiles takes around two hours, depending on traffic and on how many people want to get on and off along the way. We arrived at ten minutes to eleven.

Step 3: From Guápiles to Cariari

In Guápiles, you need to take a bus to Cariari. You don’t have to change terminals, you just need to figure out where to buy your ticket. Ask around and people can point you to the tiny ticket counter next to a bakery.

Since we arrived in Guápiles at ten to eleven, we managed to catch the bus at eleven. You might not be as lucky, but buses leave regularly and you shouldn’t have to wait for more than an hour.

The bus from Guápiles to Cariari takes around 45 minutes. We arrived there at quarter to eleven. 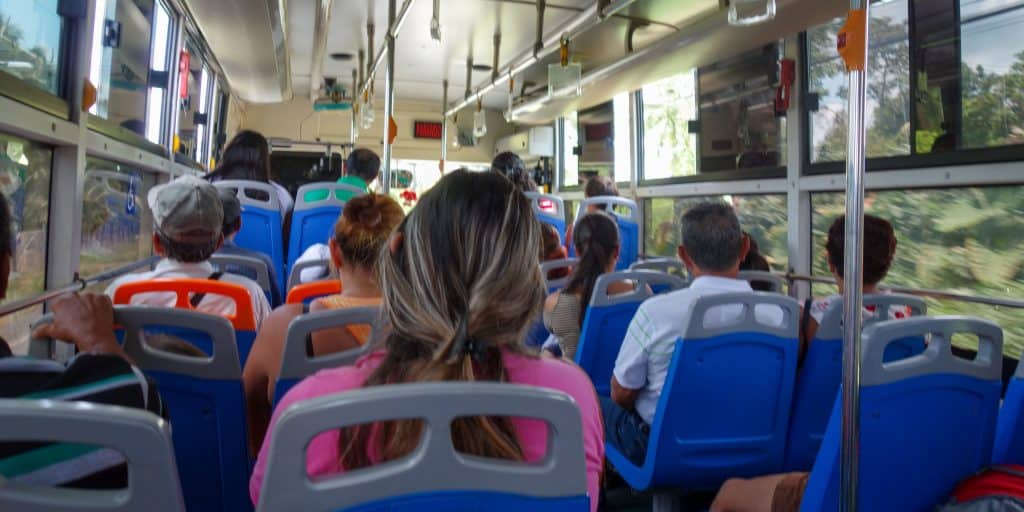 Step 4: From Cariari to La Pavona

It is time for an (involuntary) lunch break. We arrived in Cariari at quarter to eleven. The bus to La Pavona didn’t leave until three so we spent three hours sitting on a bench, having a cold drink and some snacks while waiting for our bus to leave. Depending on how lucky you were with your connections, you will have between one and three hours waiting time.

The first thing you should do upon arriving is buying a ticket to La Pavona. The bus only leaves every couple of hours and connects with the boat. Afterwards, get ice cream and wait for your bus to leave.

The ride to La Pavona took us one and a half hours. It might only be around 30 kilometres but we took plenty of stops along the way. The bus driver eventually took a break to sell us boat tickets, and then we went on. We reached La Pavone at half past four.

Step 5: From La Pavona to Tortuguero

At La Pavona, you need to catch a boat to Tortuguero. If your bus took a long time to get here, don’t worry. The boats wait for the bus, just like the bus also waits for the boats on the way back.

If you bought your boat ticket on the bus, you need to find your captain here. He will be waiting for you once you step off the bus, just like many other people who are waiting to sell you a boat ride. It might pay off to wait and buy your ticket just here. Since we had already paid for our passage, we had to wait until our captain was ready to leave. We spent an hour sitting on a bench before we finally started making our way towards Tortuguero.

The boat ride down the river can be fast or slow, depending on the water level. Some people have done it in 45 minutes, others have taken more than two hours. For us, it was an hour and a half. We left La Pavona at half past five and arrived at seven. By that time, it was already dark. If you are luckier and catch a boat immediately and your boat ride is short, you can arrive between five and six.

How much does it cost?

Going by public transport is a lot cheaper than taking a shuttle. I paid a total of 8640 Colones, which, at the time of writing is the same as 15,25$. Just so you can compare, the private shuttle from Puerto Viejo to Tortuguero costs around 70$, so if you’re on a budget, this is your best option.

There are also shuttles from Moin, a harbour north of Puerto Limón. They were only 40$, but the ones I have seen left at 8:00 am, which means you would have to leave Puerto Viejo with the bus at 5:30. Ask around, maybe you can find better offers, but none of them will be as cheap as going by public transport. 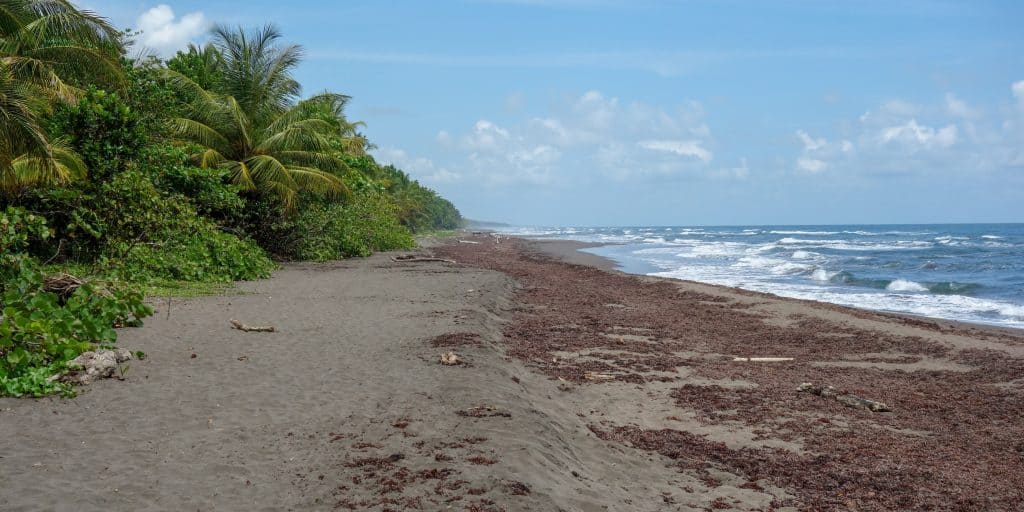 Once you have finally arrived, you can watch turtles nest on this beach.I hope you have found this guide useful. If you have any updates for this route, whether they concern the schedule, the price or anything else, I would love to hear about them. Have you ever been to Puerto Viejo or Tortuguero? How did you get there? 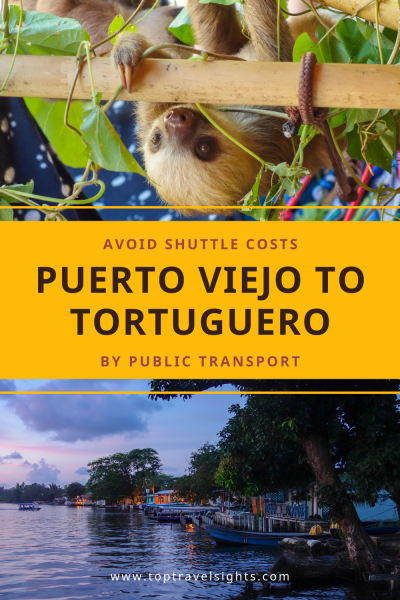