Volcan Santa Ana is one of El Salvador’s biggest tourist attractions. The light green lagoon that bubbles in its crater, with smoke rising up, is a spectacular sight.

I have to admit, this was the one destination I did not research properly. I love research, but by the time we had arrived in Santa Ana, I was tired and exhausted and figured I could just go without reading up on it. It led to a lot of confusion, us almost jumping off at the wrong bus stop and worrying for a while that we would not end up seeing the volcano at all.

But do not fear. To make sure that the same thing doesn’t happen to you, I have put together this guide. Here, you will find all the information you need to climb to the top of Volcan Santa Ana without needing to join an expensive guided tour.

How to hike Santa Ana Volcano 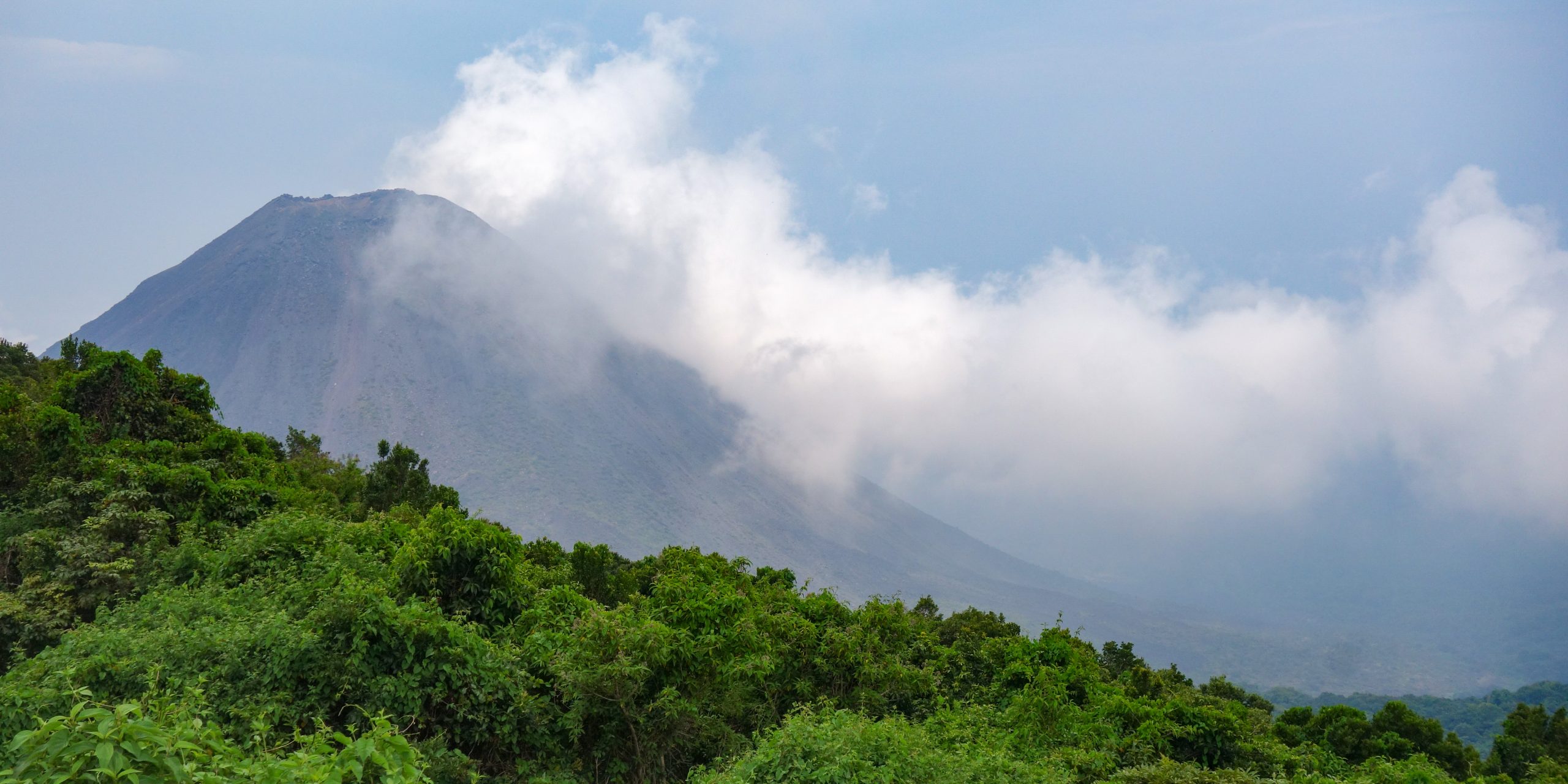 Getting to Volcan Santa Ana is easy. You need to base yourself in Santa Ana and from here, you can take a bus to Cerro Verde. The company is called La Vencedora. Buses leave every morning between 07:30 and 07:40. Since there is only this one bus, make sure to arrive on time. If you miss it, you will not see the Santa Ana Volcano.

The bus ride takes about two hours and you will eventually end up at Cerro Verde. Get off at the final stop, when everyone else leaves the bus. Yes, you will drive past Volcan Santa Ana. But believe me, you need to go to Cerro Verde first. After reaching the final stop, pay an entrance fee and then keep walking along the road until you reach a car park. 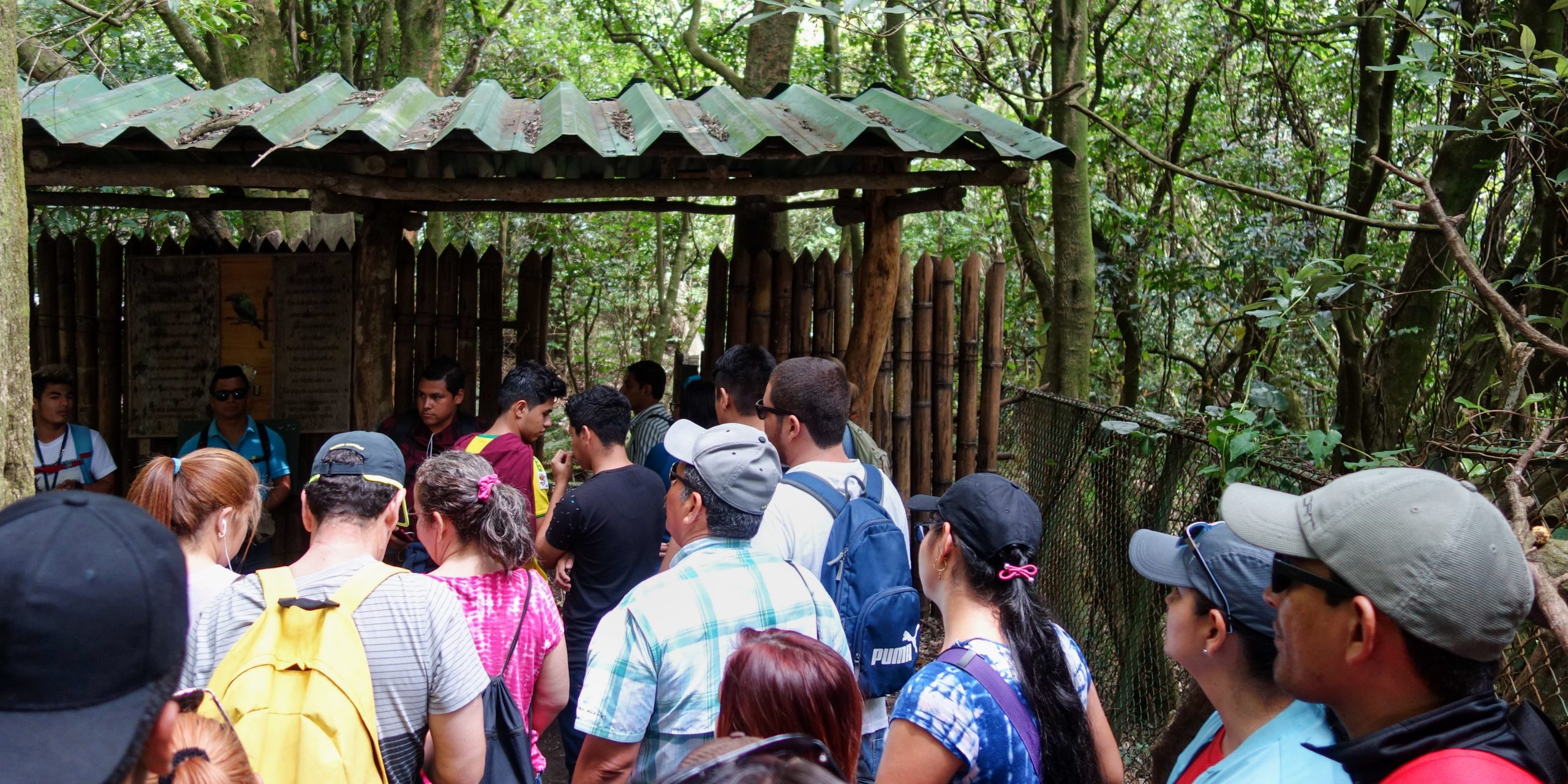 To climb to the top of Volcan Santa Ana, you need to join a guided tour. Yes, I know, I just told you that you don’t need to go on an overpriced tour. But this is different. It is not a proper tour, it is walking in a group with one guide at the front and one guide at the back. If you took the bus at half past seven, as I recommended, you will end up at Cerro Verde at around half past nine. The climb starts at eleven, from the wooden cabin on the left side of the road, just after the mirador.

In the remaining one and a half hours, you can eat pupusas (El Salvador’s national dish – highly recommended), drink a hot chocolate, buy fruit, stock up on snacks or use the bathroom. If there are many people who want to climb to the top, an earlier group might leave at around ten, so make sure not to stray too far away.

At quarter to eleven, a guide will call out to you. You will get a briefing in Spanish, which basically says that you cannot litter, you need to stay with the group, you are not allowed to smoke or to listen to music without headphones. Oh, and please don’t fall into the crater as you won’t survive. Most of it is common sense so don’t worry if you don’t speak any Spanish.

The hike to Volcan Santa Ana 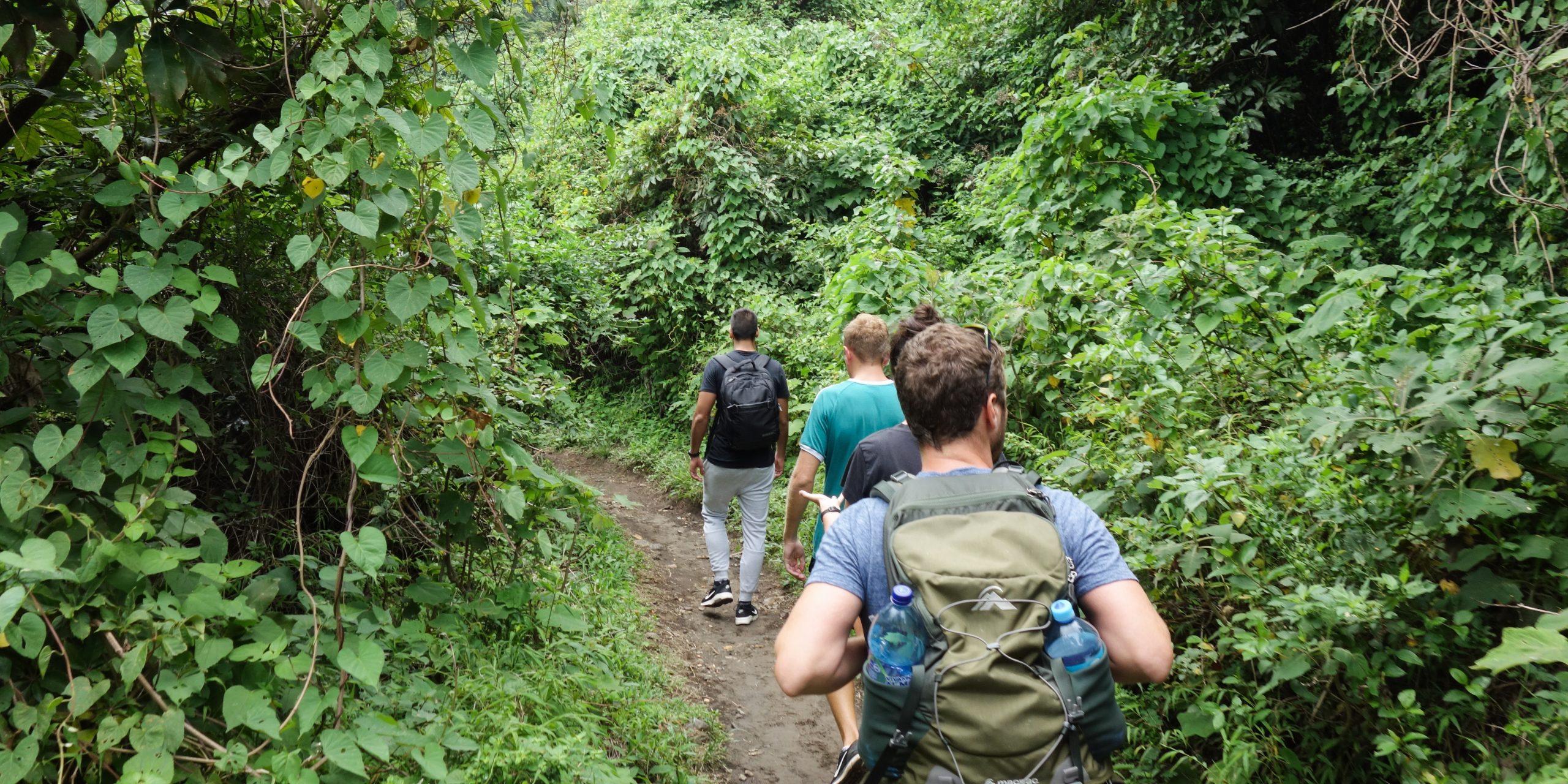 After the long bus ride, the waiting time and the briefing, it is finally time to start climbing the volcano. The whole group sets off across the car park. You start going into the woods and then, two minutes later, stop again for the next briefing. By then, even though I do speak Spanish, I was seriously confused. Who needs that many briefings, especially since this one was basically a repeat of the first one? Fortunately, it eventually passed and then we had to pay a dollar to our guides before we could go on.

The path led downwards at first, down Cerro Verde and then along the road to Volcan Santa Ana. Here, you have to pay another entrance fee and you will, once again, get a briefing. By now, I was so used to them, I would have been surprised if the guide hadn’t stopped us to hold a speech.

Finally, we set off on the uphill walk to the top. The gate opened and all the locals fought to be the first ones inside. It was as if only the ones at the front would get to see the volcano. We took our time and eventually got inside, too. On our way up, we then passed quite a few of those who had pushed past us in the beginning.

From the entrance, it took about an hour to get to the top. The path led through woods at first. Then, the trees turned into bushes and grass and finally, vegetation disappeared completely. Keep your eyes open, we managed to see a coati along the way. 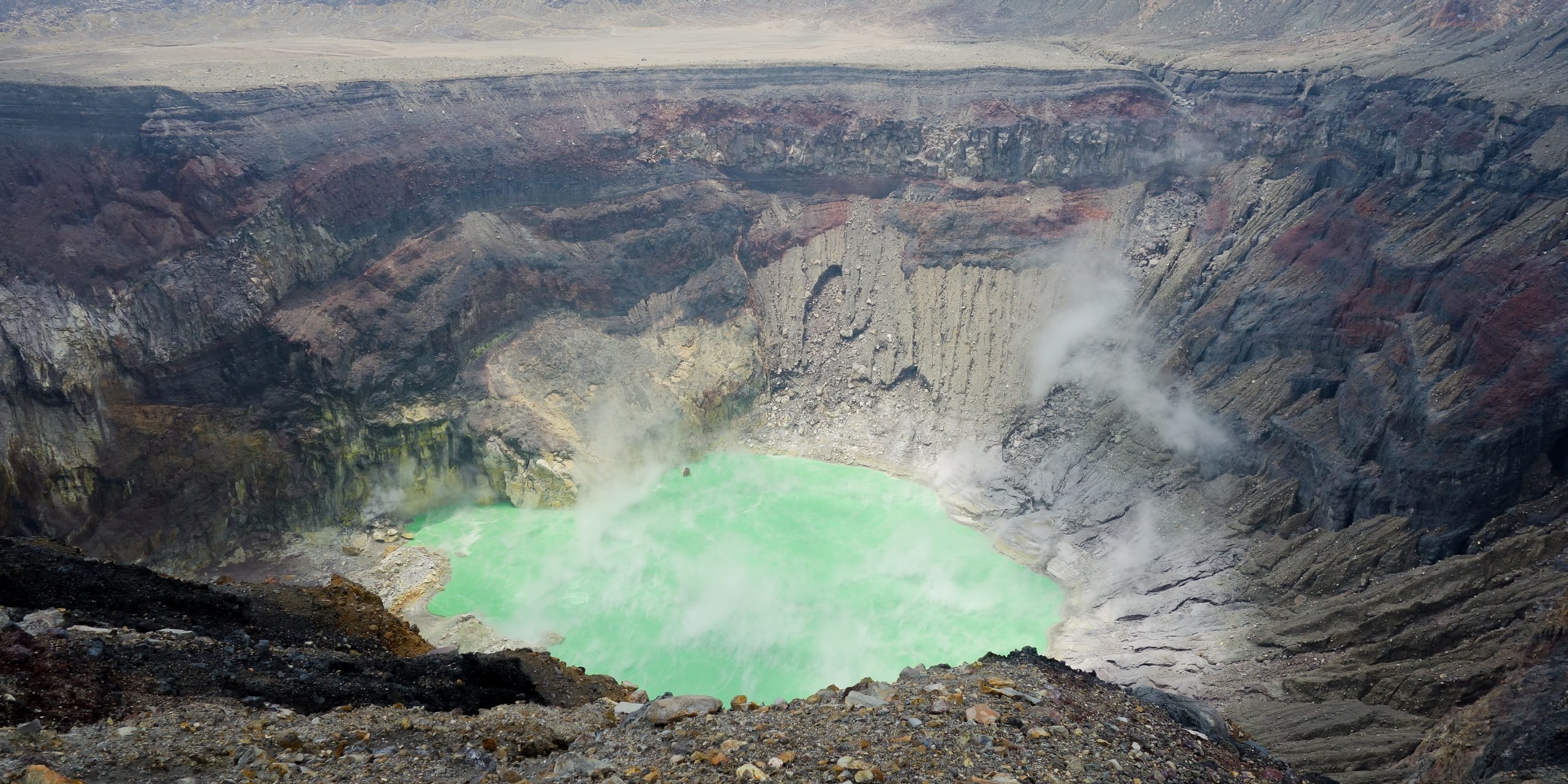 Once we reached the top, I started taking pictures and looking for the best viewpoint. Let me tell you one thing. It is not on the left. If you want to have a good view of the green lagoon, you need to turn right and keep walking. Eventually, you will get to a point where you can see all of it.

On your way, you will pass a large rock. It’s a good vantage point for taking pictures of people standing in front of the volcano. 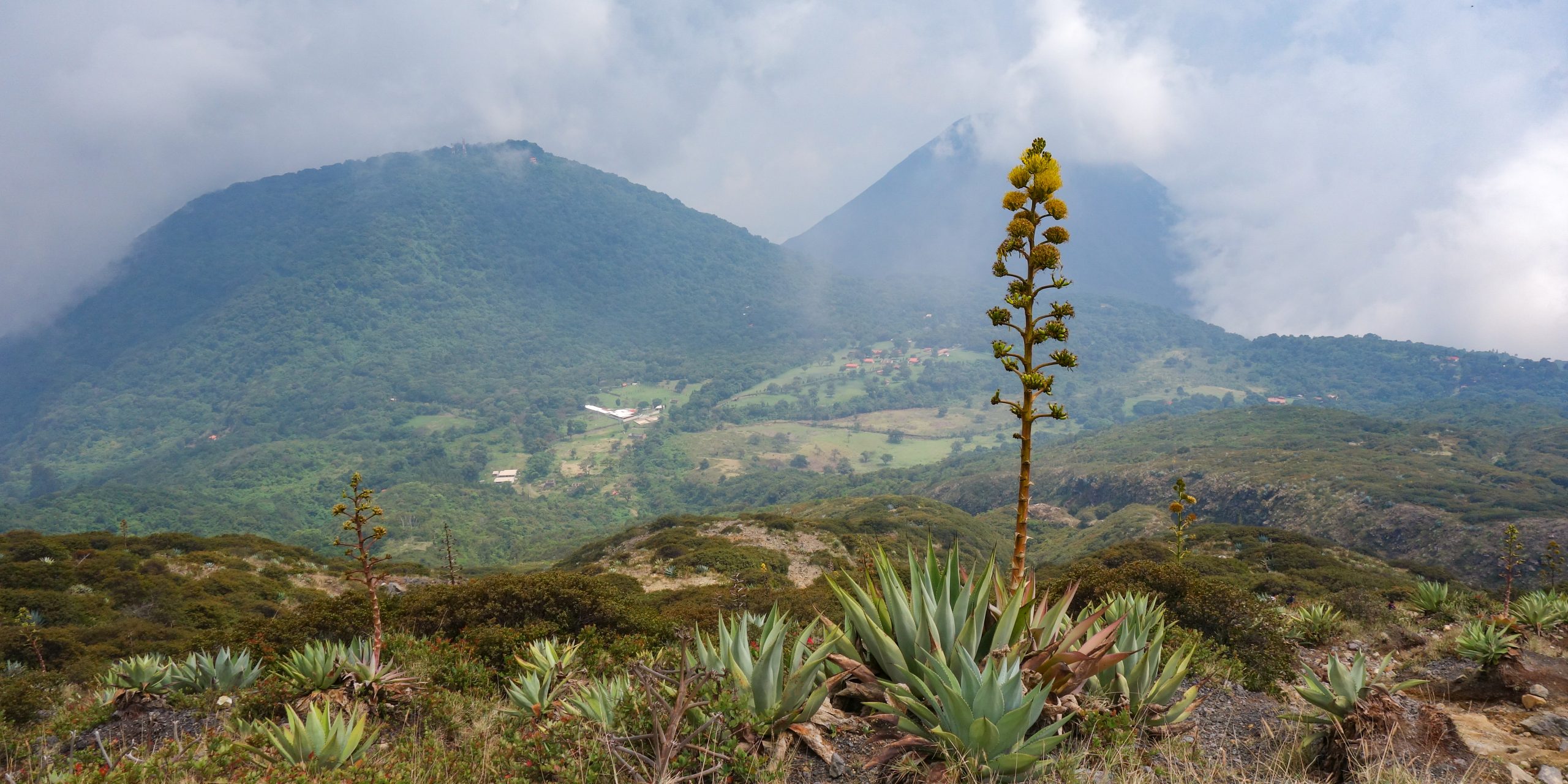 Eventually, our guide called out to people to go back down again. By then, more than twenty minutes had passed and I had taken far too many pictures. The way down followed exactly the same path we had taken on the way up. Watch your step as the mountain is steep and it’s easy to slip.

Once you get to the entrance of Volcan Santa Ana, you need to go out and follow the road back up to Cerro Verde. Do not try to find the small trail you took to get there. Not only will you end up lost, but it is also so steep that it is far easier to walk on the road.

Try to be back at Cerro Verde before four o’clock in the afternoon, as that is when the bus leaves to go back to Santa Ana. If you’re still walking uphill by then (which is highly unlikely), wave when it comes and it’ll stop to pick you up.

When we went to the Santa Ana Volcano, it was a blazing hot day in Santa Ana. The thought that it might be cold up on top of the mountain never crossed my mind. Fortunately, I still had a light jacket in my backpack or I would have been very uncomfortable.

Besides enough clothes to wear, you need comfortable walking shoes. I did the hike in trainers and that worked very well for me. Don’t wear flip flops, but you don’t need to buy any hiking boots either.

Make sure to check out our day hiking packing list, which tells you all the details of what you need to take on your hike!

Bring enough water, at least one or two litres, and also snacks that are fast to eat. You might not be as lucky as me and have lots of time at the top, and even if you do, it is nicer to enjoy the view than to start making sandwiches up there.

I hope this guide was useful to you. If you want to know how to get to Santa Ana from Honduras, check out this guide. Also, if you have ever been to El Salvador, I would love to know what you did and how you liked it. I unfortunately only had two nights in this country, but I would love to come back and am looking for recommendations.

Until your next adventure! 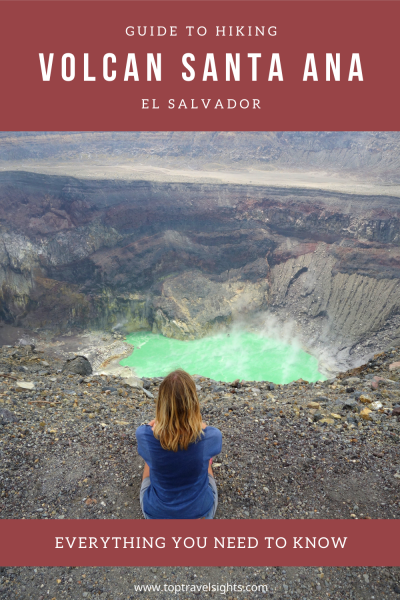